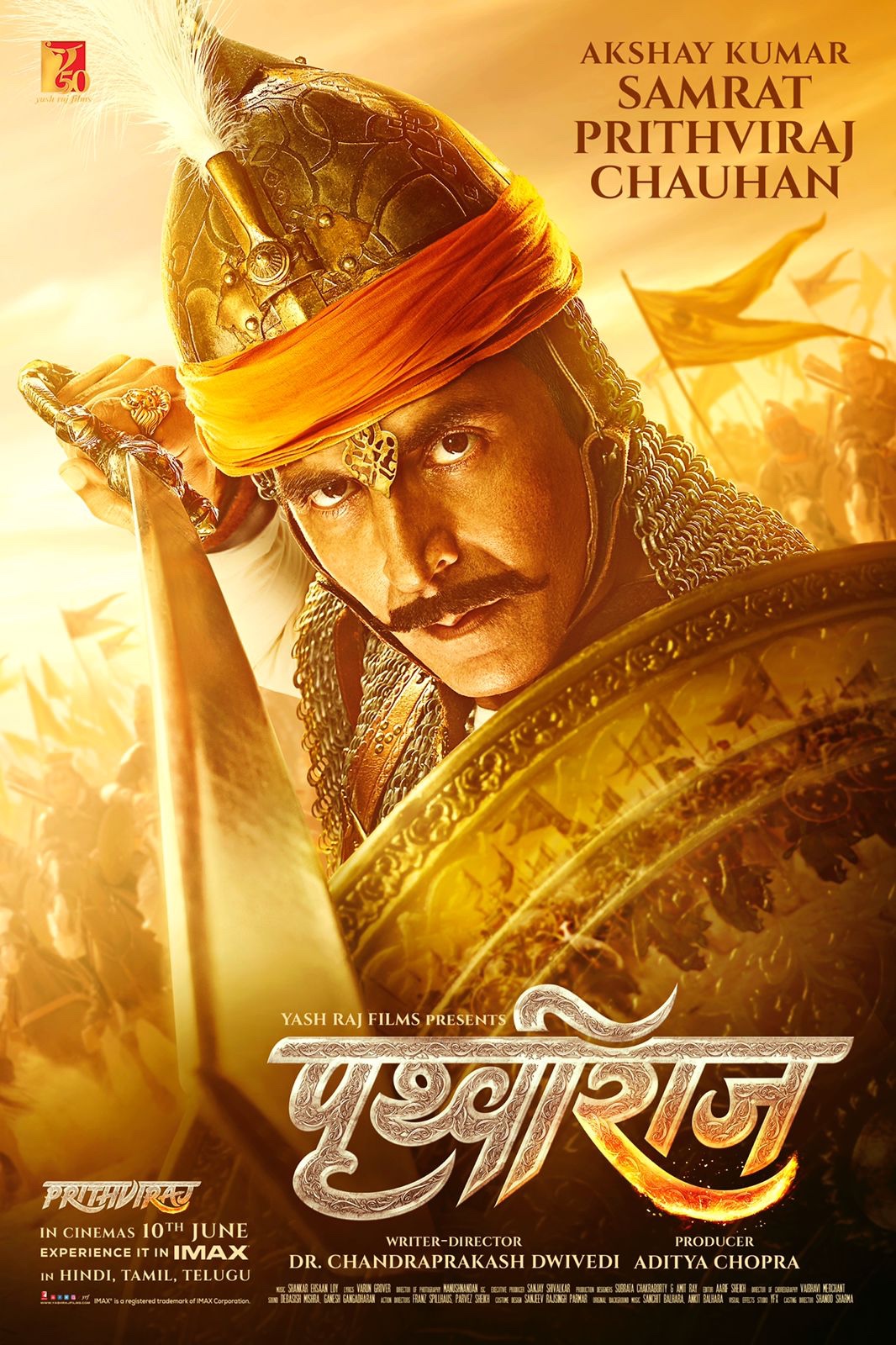 Akshay Kumar’s Manushi Chillar starrer is directed by Chandrapraksh Dwivedi and produced by Yash Raj Film. It is based on Prithviraj Raso, a Braj Bhasha epic poem about Prithviraj Chauhan. The former Miss World starrer is a multi-lingual film – Hindi, Tamil, and Telugu. The expectations are high for the music since it was composed by Shankar Eshaan Loy. AkshayKumar is playing the role of Prithviraj Chauhan and Manushi Chhillar is playing the role of Princess Sanyogita. Prithviraj Chauhan was a fearless and mighty king whose role is being played by the Bollywood superstar Akshay Kumar. It is a huge responsibility for Akshay Kumar to portray the role of the legendary warrior who fought valiantly against the merciless invader Muhammad of Ghor. It is the debut film of Manushi Chhilar, she is looking stunning in her royal look as a princess. The cast of the film also includes big names of Bollywood like – SonuSood and Sanjay Dutt. Manushi shared on her insta handle “EkSamratAurEk Rajkumari ki Amar prem Kathadekhiye Samrat #prithviraj Chauhan ka Trailer now”.

Netizens showered the trailer with loads of love after seeing the amazing trailer of Prithiviraj. The movie was ready to hit the big screen on 21 January but due to the rising cases of Covid 19, the filmmakers postponed the release date. The film is going to be released on 3rd June 2022. Visit the link below-

The Bollywood couple got married at the luxurious Six Senses Fort Barwara in Sawai Madhopur, Rajasthan on December 9, 2021. Their wedding was attended by family members and close friends. Prior to their nuptials, neither Vicky nor Katrina commented on their relationship. Vickat has just posted on their Instagram story to light up the day of their crazy fans. Katrina posted a photo stating that “Bubby’s” is her favourite eatery. She was wearing a casual green shirt with open hair; she was looking perfect for her day date with her husband. She posted a picture plate full of scrumptious pancakes with strawberry toppings, chocolate spread, and fresh cream, which looked really yummy and delicious! The new bride elegance is still fresh in her smiles. Vicky posted a picture of him strolling the NewYork City’s streets with his arm around his new bride’s shoulder. His fashion of denim-on-denim strategy with a white t-shirt was on point. He captioned the image “Sugar rush.” They looked just perfect on their vacay, sending couple goals vibes. And the couple seems like they are enjoying their togetherness on NewYork streets. See the posts in the link given below-

On Mother’s Day PC Shares Her joy of Motherhood

Priyanka Chopra and Nick Jonas shared a joyous news about their daughter Malti Marie Chopra through their respective Instagram handles. As Malti is finally home after 100 days, the oft-in-news couple took to Instagram to share the update. The couple dropped their first picture with their daughter and looked very ecstatic with their little one coming to home. The picture shows Priyanka Chopra holding her daughter as Nick sits alongside looking adorably at the newborn princess. Priyanka revealed that their daughter was born premature and was kept in NICU (neonatal intensive care unit) for 100 days. Priyanka also shared that for the last few months it was very challenging for the family but everyone is overjoyed since the arrival of their newborn daughter. She added, “Every family’s journey is unique and requires a certain level of faith, and while ours was a challenging few months, what becomes abundantly clear, in retrospect, is how precious and perfect every moment is. We are overjoyed that our little girl is finally home, and just want to thank every doctor, nurse, and a specialist at Rady Children’s La Jolla and Cedar Sinai, Los Angeles, who were there selflessly every step of the way. Our next chapter begins now, and our baby is truly a badass. Let’s get it MM! Mommy and Daddy love you.”

She also wished her fans on Mother’s Day. “Happy Mother’s Day to all the mothers and caretakers in my life and out there. You make it look so easy. Thank you. Also.. there is no one I’d rather do this with than you. Thank you for making me a mama @nickjonas I love you Ps- thx @divya_jyoti masi for the picture and @akarikalai Masi for MMs fit,” she wrote.

The most awaited Bhool bhulaiya 2 is finally releasing on 20 May 2022. Annes Bazmee directed Kartik and Kiara starrer has already attracted a lot of public attention even before the release and the new song released today is setting the expectations higher. The Pritam and Tanishk Bagchi musical seems like it is appealing to the melody music lovers. “Hum nashe mein toh nahi” from the yet unreleased horror-comedy is the new repeat for Bollywood music lovers. Kartik and Kiara are both looking very chic, glamorous, and totally into each other in the song. The soulful voice of Arjit Singh and Tulsi Kumar added emotion to the song, another reason why you can already hear it every where. The lyrics are written by Amitabh Bhattacharya. Netizens are going crazy and already in love with this song.

Alia Bhatt celebrated Mother’s Day with both of her mothers!!!

Alia Bhat recently tied a knot with Bollywood’s most eligible bachelor Ranbir Kapoor in April this year at their Mumbai residence. Alia Bhatt shared an Insta post dedicated to her mom Soni Razdan and Mother-in-law Neetu Kapoor. The picture was cute and emotional and Alia shared her strong bong with her mother and mother-in-law in the post. Alia shared a selfie from what appears to be the one from her wedding festivities which is evident from the Mehendi on her hands. The Brahmastra actress wrote in her caption; “My beautiful beautiful mothers. Happy mother’s day – all day every day”. In a comment Soni Razdan wrote-“happy to be your mommy too love you.” Neetu Kapoor left a comment on the post “love you Ala.”

Alia is going to make her Hollywood debut with Netflix’s Heart Of Stone co-starring Gal Gadot.