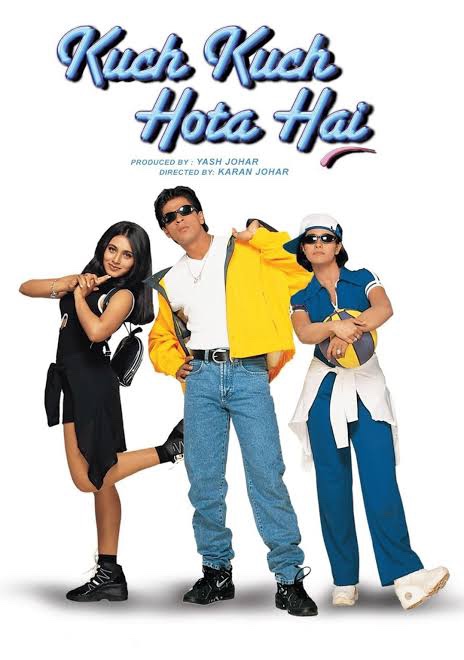 Here is an epic start with an epic movie! Kuch Kuch Hota Hai may probably be not the first movie that pops up in your mind when we say college, but it surely has its place because it was a trendsetter for college romance stories of those times. The movie has undoubtedly earned a good reputation. It has been one of the classic hit films, probably the first one to portray the real-life of college students. This movie depicts college life as fun and easy-going life, which is contrary to reality, but did you not wish your college life to be Kuch Kuch Hota Hai way? The film shows the life of three students, the lover boy played by king khan, and two girls played by Kajol and Rani. It is a love triangle, the first half covers friends on a college campus, while the second tells the story of a widower’s young daughter who tries to reunite her dad with his old friend. It has beautifully captured everything that defines the entire Gen-X back in those days. It was considered one of the milestones of Bollywood movies.

This list is incomplete without Main Hoon Na! It is all about how two brothers unite who have been separated due to some unavoidable circumstances. It was interesting to see how a mission leads the Badshah of Bollywood Shah Rukh Khan to the college where he had to live like a young college student instead of holding a prestigious position in the Indian army. He indulges himself in young, full of life, college romance like a college student, and living a carefree lifestyle. This movie had all the elements of a modern-day college- a love triangle, a stud boy, a super-strong bond of friendship between a guy and a girl, a good-looking professor, and also that lovestruck guy who had a major crush on his chemistry professor! This film would surely evoke a lot of memories of your college days! The movie shows how we create bonds and memories in college which stay with us forever for life.

This blockbuster movie is considered to have one of the best storylines. The film depicts how beautifully and intricately interwoven bonds we build during our college life, sticking with each other through every problem that we face. The film follows a British film student traveling to India to document the story of five freedom fighters in the Indian revolutionary movement and started to find from where they would have become the freedom fighters. The film cast “Aamir Khan,” Madhavan, “Siddharth Suryanarayan,” “Kunal Kapoor” and “Atul Kulkarni” in the lead roles. Besides enjoying their carefree college days, this quirky group of friends realizes that their purpose in life is much more than just lingering around. As they take a big step with the determination of changing the mindsets of society, they realize that their sacrifices will one day play an eminent role in changing society.

The film is about the friendship of three students in a highly competitive Indian engineering college, and it shows the social pressure faced by the Indian students in the education institutions. The film has narrated through different times, one in the present and the other ten years in the past during their Engineering time. The film stars “Aamir Khan,” “R. Madhavan,” “Sharman Joshi,” and “Kareena Kapoor”. This one is for all those hostel boys in engineering colleges! Based on Chetan Bhagat’s novel, 3 Idiots is a must-watch, when it comes to Bollywood movies based on college life. The concept of bromance between the three lead actors was prominent. With the typical college romance, the super strict professor ‘VIRUS’, the stress of exams, or the super stress of college placements, this movie is bound to evoke at least one college memory for everyone reading this article and watching the movie! Of course, particularly for those who are enrolled in an engineering college!

It is based on Chetan’s 2009 novel ‘2 States: The Story of My Marriage’, written by Chetan Bhagat. The film is about two IIM students who fall in love with each other during their college days. The twist begins when their parents from different states of India disapprove of their love and marriage. The hero, Arjun Kapoor, is from a typical Punjabi Family who lives in Delhi, and the heroine Alia Bhatt is from a simple traditional Tamil Family and lives in Chennai. The deeply-in-love couple could have eloped, but then again, they would rather have their parent’s blessings than be together. They arrange a meeting with each other’s parents, which goes wrong, and there the real challenge begins. Many of you are bound to relate to their love challenges!

This film is inspired by real life. The director of the film, Nitesh Tiwari himself is a pass out of IIT Mumbai and most of the characters were inspired by his senior and junior students apart from his own batch. Though, the name of IIT Mumbai has not been taken directly in the film. Instead, a fictional name, National College of Technology, reminds you of the college. The movie is about a student who goes to an engineering college and becomes friends with fun-loving seniors, who share the same hostel “H4,” where they become friends with the seniors and eventually find out that their college is also hosting inter-hostel matches where “H4” has never won a cup. So, the hero decides to win the cup with his techniques in the games. The lead actor Sushant Singh Rajput is no more with us but the role played by him in this film will always stay special for all of us. Although the entire movie is not about college life, the college scenes are very detailed and you cannot resist but feel tears in your eyes in the memory of your fun college days.