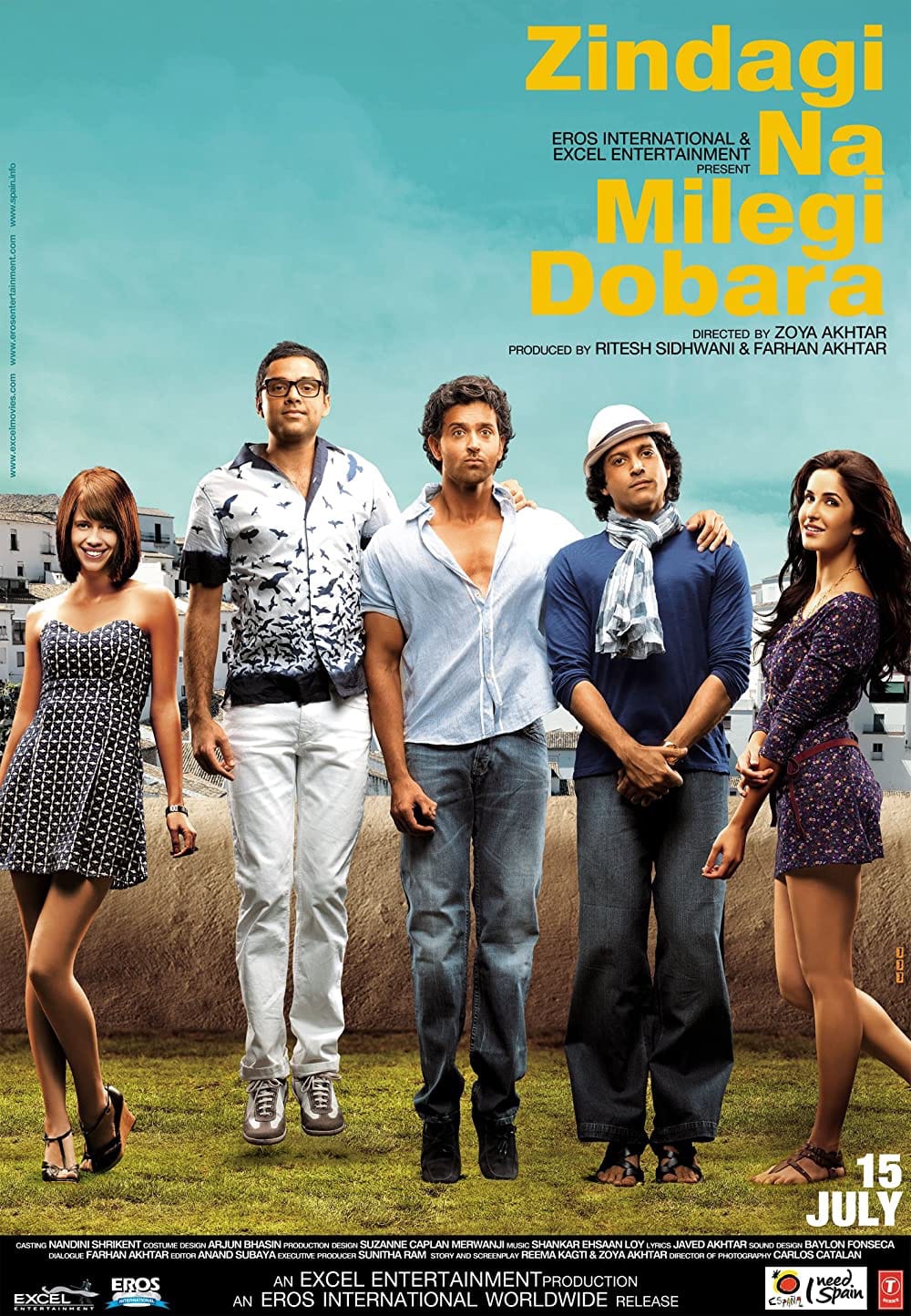 Bollywood films have always served as a pleasant diversion from our mundane lives. We are strangely liberated and transported to a world of glamour, fantasy, and entertainment during the three-hour indulgence. The beautiful places and exotic destinations that we dream of witnessing at least once in our lives are sometimes more significant than the story, entertainment, or even the actors in the film. Traveling has become an important part of life, and the urge of investing in experiences rather than tangible possessions has risen dramatically. Bollywood never failed to thrill its viewers with movies that inspire them to travel.

So, here is the list of the best 5 travel movies that will satisfy thetraveler in you:

ZNMD revolves around the story of three bachelor friends who embark on a bachelor’s trip to Spain (which they had planned during their college years) to face their fears. Hrithik Roshan, Abhay Deol, Farhan Akhtar, Katrina Kaif, and KalkiKoechlin feature in the film. For film lovers, this film setsquad goals trend. As they road-tripped from Barcelona to Costa Brava to Seville to Bunol to Pamplona, savoring the renowned La Tomatina Festival and indulging in adventures like deep-sea diving, skydiving, and a bull run along the way, they inspired viewers to plan a Spanish vacation. We get to see how traveling and having new experiences transformed them all in the end. Don’t be embarrassed to binge-watch this movie with your pals on a lazy weekend, don’t be surprised if you go on an impromptu trip to Spain!!

The film Jab We Met begins on a train in Mumbai, where a business tycoon, Aditya Kashyap, played by actor Shahid Kapoor, and a simple carefree college girl, Geet Dhillon, played by actress Kareena Kapoor, begin on an adventurous journey. It begins on railway tracks and continues through Manali and Shimla highways to the Himachal hills. It gives you a glimpse of Bhatinda’s rural side, which is one of Punjab’s oldest cities. Some of the scenes were shot at Manali Castle, which is a major tourist attraction in Manali and the story ascends from there to the snowy landscapes and a small road with white walls on both sides of Rohtang Pass.With an engaging storyline, incredible cast, and a mind-boggling and life-changing journey through various cities and towns (Kota, Bhatinda, Manali, and Shimla) in India by different modes of transport like a train, bus, rickshaw, cycle, jeep, and even truck, Jab We Met is a delight for the eyes as well as the soul. The movie made us realize that unplanned and spontaneous trips are more fun, reiterating it is okay to not have a plan!

We go on a whirlwind tour of Manali, Paris, and Udaipur in Yeh Jawaani Hai Deewani. YJHD stars Ranbir Kapoor, Deepika Padukone, Kalki Koechlin, and Aditya Roy Kapurand explores the joyful side of traveling. It depicts how ‘Naina’ (Deepika Padukone) started to recognize what it meant to live and love after she goes on a trip with her friends. She evolves from a timid studious medical student to a fun-loving girl who breathes a new air—the air of love. Her trip to Manali with friends had a significant influence on her. She is willing to take a risk and proclaim her love for ‘Bunny’ (Ranbir Kapoor). With his view on life, the world, and friendships, Kabir (Bunny) touches the audience in a variety of ways, inspiring us to travel to new places and live our lives to the fullest. He is portrayed as a travel freak who maintains a trip diary to record his interest in seeing new destinations throughout the world. Later in the movie, the ‘Royalty of Rajasthan’ experience offers some real destination wedding goals. The film has a positive vibe to it. It brilliantly encourages people to travel and spend time with their friends. From the snow-capped Himalayas to the picture-perfect lanes of Europe to the lavish palaces of Udaipur, the film can inspire anyone to gather their friends and plan a memorable trip to the hill stations, venture on challenging treks and shed nostalgic joy and happiness.

Queen encourages all young women to overcome their fearsand travel alone at least once in their lives. The film begins with a young woman who takes a solo trip to Paris, which was supposed to be her honeymoon. Kangana Ranaut plays a homely, shy girl who, after being abandoned by her fiancée, decides to travel on her honeymoon alone. The protagonist, Rani, falls in love with herself while strolling through the beautiful streets of Paris and Amsterdam. She meets different people on her journey, staying in hostels and shared accommodations, and discovers her true self in the process. Her initial trepidation and anxiety are replaced by unwavering confidence. The movie is known for its originality and audacity, as it emboldened many solo women travelers to find their courage and explore the world.The movie beautifully crafted the concept of solo travel.

Funny, clever, and uniquely told, Piku is a film that showcases a remarkable road trip from Delhi to the ancestral house inKolkata,with a tale of a complicated yet beautiful father-daughter bond. Piku is everything that you can expect if you’ve ever gone on a road trip with a cranky old father, Bhaskor played by Amitabh Bacchan, and his daughter Pikuplayed by Deepika Padukone.They were accompanied by Rana (Irrfan Khan), a taxi stand owner who ends up chauffeuring them when his driver ditches at the last minute. The quaint charm of Varanasi and the old-world charm of Kolkata will tickle the traveler in you. Apart from including some great shots of the City of Joy, it makes you urge for some sumptuous Bengali dishesfrom fish curry to egg- rolls. It recalls how heart-warming it is to meet loved ones after manyyears. It’s a great family movie that might make you want to spend every moment of your life to the fullest and make great memories with near and dear ones. Quirky, and insightful, Piku films Kolkata so lovingly that it makes us want to visit it right away!