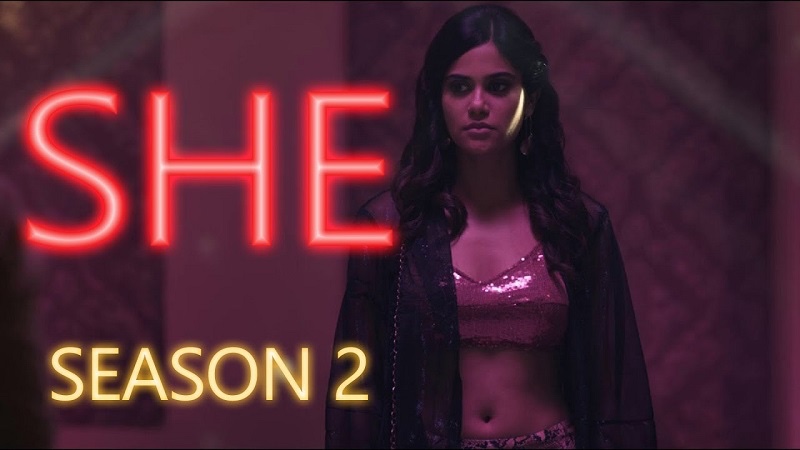 OTT platforms have never failed to amaze us with new and out-of-the-box content. June is already knocking on the door and there are many global and national series that are all set to hit the OTT screens.  So here is the binge-list of new series that will make your June full of amusement:

On June 17, the Indian Netflix series She, written and created by an eminent filmmaker of Bollywood Imtiaz Ali, will premiere its second season. Arif Ali directed seven episodes in this series. Mohit Choudhary is a co-producer of the film. Along with Aaditi Pohankar, Vijay Varma, Vishwas Kini, Kishor Kumar G, Vishesh Sagar, and Shaqib Ayub will also play crucial roles in this web series. The show’s first season followed the story of a poor female police officer Bhumika played by Aaditi Pohankar in the Indian Police Force who is assigned to the Anti-Narcotics Group to take down a powerful drug lord. Bhumika goes undercover as a prostitute in Mumbai as part of her assignment. In the meantime, she’s battling her drunken husband at home and trying to finalize her divorce. Her mother is ill, and her sister is in college, so she is the sole breadwinner in the family. The second season’s plot will continue from where the first season ended. Bhumika is back in the dark alleys of Mumbai, facing the dual pressure of duty and passion.

Ms. Marvel is set to introduce a brand-new character into the Marvel Cinematic Universe in the form of Kamala Khan. She is (Iman Vellani), a 16-year-old Pakistani-American from Jersey City. Kamala Khan is an ardent gamer and fan-fiction writer who is a superhero and a big admirer of Brie Larson’s Captain Marvel. The upcoming series will explore Kamala’s ups and downs during high school. On June 8, Hotstar Disney+ will premier this show. She is an enthusiastic gamer, an aspiring artist, and a voracious fan-fiction scribe. In the series, we will surely get a glance at how Kamala always battled to find her place in the world — until she obtains hersuperpowers like the heroes she always admires.

The third season of Ashram will stream on MX Player on June 3. Bobby Deol plays a self-professed godman who is a fraud seeking to cover his unlawful activities by impersonating a popular cult in the Prakash Jha drama. Parminder (Aaditi Pohankar) vows to kill the Baba and shoots at him before realizing it’s all a dream in the trailer. The next scene shows a more forceful megalomaniac Baba Nirala (Bobby) declaring that his word is the law and that he is no longer afraid. There are mentions of a ‘menu card’ for the cabinet of ministers, with seats costing up to 35 crore rupees. Then, for the first time, we get a glimpse of Esha Gupta, who will be joining the cast this season. She is seen dancing for the Baba as one of his disciples in a quick peek. There are clues, though, that there is more to her story. The series also stars Anupriya Goenka, Adhyayan Suman, and Tridha Choudhury. Let us see! How Baba Nirala’s, the self-proclaimed God, story unfolds as he hopes to spread his empire overseas.

Prime Video superhero series season 3 of The Boys has been announced on June 3, 2022. The first three episodes will be released on the date, with the remaining five episodes scheduled to be streaming on every Friday. In this series, we will get to see that Homelanders have been brought under control. Butcher works for the government and Hughie is in charge of him. On the other hand, both guys have a desire to transform this tranquility into blood and bone. As a result, when The Boys learn of a mysterious anti-superhero weapon, they collide with The Seven, resulting in a conflict and the continuation of the story of the first superhero: Soldier Boy.

Season 6 of Peaky Blinders will be available on Netflix worldwide on June 10th, 2022. The majority of the Shelby family is returning on the screen, with Cillian Murphy, Paul Anderson, and Sam Claflin all reprising their roles. In addition to Tom Hardy, Stephen Graham has joined the cast of Peaky Blinder. Shelby’s infiltration into Britain’s expanding fascist organization, as well as a botched assassination attempt, the dissolution of the Peaky enterprise, and lingering anguish over the death of his long-time love, Grace, were all compounding into something greater when we last left the Peaky Blinders gang on a cliff-hanger. Shelby in the last episode of the 5th season appeared to be on the verge of suicide, but if he actually did, what would be there in season six? Well, the answer to all this curiosity lies in the series itself.