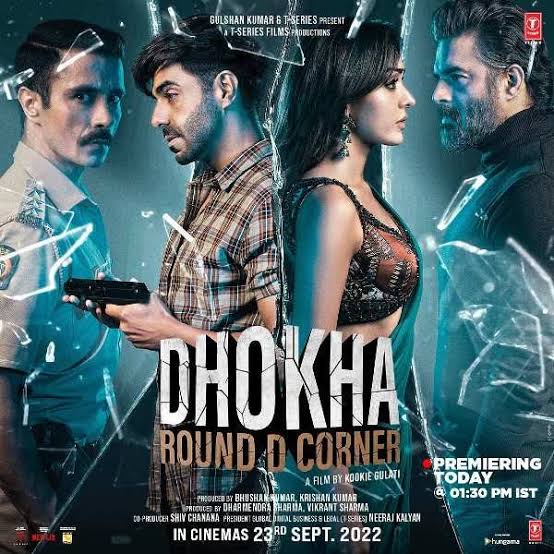 ‘Dhoka Round D Corner’ is a tale of betrayal, as quite befittingly named. The film is a mystery drama which leaves behind a lurking thought about who’s the master betrayer -the central characters, the law enforcers or a dreaded criminal.The film brings a sense of  deception all around which goes beyond it’s plot…writes Dr.Priyaankaa Mathur

Directed by Kookie Gulati starring  Madhavan, Khushali Kumar, Aparshakti Khurana and Darshan Kumar, the film is a gripping tale that keeps you wondering till the end who’s the bluff master. The story begins with a happy newly wed couple enjoying companionship, while they eventually develop strain in the relationship. The wife Sanchi ( Khushalii Kumar ) seems suspicious of her husband Yathartha Sinha( R Madhavan) involved in a relationship with a psychiatrist,while the husband blames her to be a delusioned psycho who keeps building up these stories.

Then appears a dreaded kashmiri terrorist Haq Gul (Aparshakti Khurana) who enters this house holding Sanchi hostage, while he manages to run away from the grip of the police.Yathartha hears the news in his office and rushes home to rescue his hostage wife. He tells the police officer(Darshan Kumar),about her mental illness and she needs to be given her medicines before she becomes hyper and spoils the situation.

It’s a bit strange that both Yatharth and Sanchi both are extremely calm and levelled and show no sign of terror, while they share their stories with absolute strangers, confusing the audience who’s actually be staying whom. Madhavan eventually calls Gul  to give a pill to his wife before she gets an attack. The police is shown helpless stuck with political pressure to take action but they need time to watch the situation.Untill Yatharth finally looses his temper and blames the cops for not being proactive.

The plot becomes interesting inside the house where Sanchi tells Gul that her husband is trying to prove her crazy. She lures the terrorist untill he falls in love with her and decides to run away with her with an unloaded gun, but she ditches him by disclosing that to the police. Gul takes her back into house and demands a huge sum along with a vehicle to run away. Wondering why he would come with an unloaded gun, Yatharth tells the inspector that Sanchi  can manipulate minds through her vulnerability, but the inspector counters him asking is it vulnerability or her skill?

The movie becomes slow in the first half but then picks up.Finally, Yathartha is brought to the position by the inspector to agree to pay the sum demanded by the terrorist in return of safe rescue of his wife. Yathartha enters the flat with the money, gun shots are heard, but who actually plans the kill remains a mystery for the audience to find!

The film has great performances by Khushalii who pulls off the character of a delusional, volatile woman quite well.  Aparshakti portrays well the kashmiri  terrorist with his accent, while he looks helpless, and delusional more than a dreaded terrorist. R Madhavan and Darshann Kumar managed the roles well, but are certainly not their phenomenal best.The film needed better direction, screenplay and layering of characters, although the script is good enough to keep you gripped!