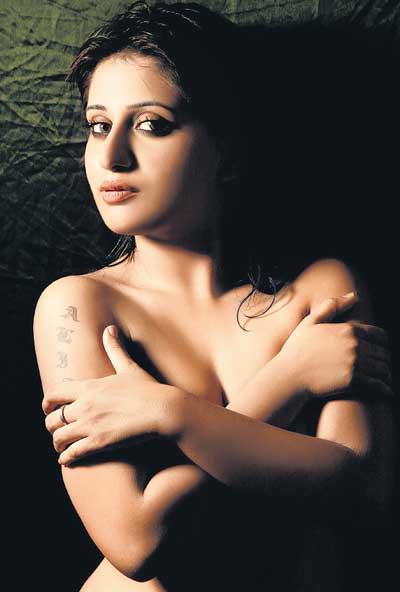 It seems Bollywood is running short of new publicity ideas. A newcomer in Tinsel Town Alisa Khan has blamed her co-star Rakhi Vohra for ‘getting fresh’ and doing other ‘indecent acts’ with her during the shoot of ‘ My Husband’s Wife’ in Kuala Lumpur
Model turned actress Alisa Khan plays an important role in producer-director Vinod Chhabra’s film My Husband’s Wife was so upset with her co-star that she went to the extent of accusing her of molestation.
She told media persons that she was zapped by this experience and decided to leave B-Town to get a job as an airhostess.
“When I was shooting for the movie, my co-actress, Rakhi Vohra suggested that we share the same suite in a five star hotel in Kuala Lumpur. I agreed to shift to her room because I thought I would have some company.
‘However, I didn’t know what was awaiting me,” said Alisa.
“Rakhi started getting fresh with me. She started stripping and chasing me stark naked. When I protested, she locked me inside the room and went for the shoot alone.
It was only after I called up Pawan and the producer Vinodji that they pleaded with Rakhi to give them the keys,” she added further. Filmi Files is a website which offers news, views and even the inside stories from the glamour world be it Bollywood or Hollywood, for those who love the cinema.

One thought on “My female co-star tried to molest me: Alisa Khan”