Story of Tarantino’s one night stand with an Indian girl! - Filmi Files
Skip to content 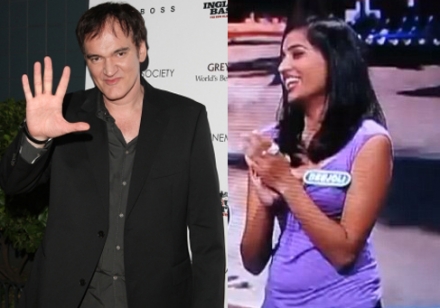 Everyone knows that Quentin Tarantino is a foot fetishist; after all he drank champagne from Uma Thurman’s 6-inch heels. That was a couple of years back. Now, an email written by a young lady is ripping Tarantino’s foot fetishist image apart and in the most ruthless way.
The mail written by a girl named Beejoli was sent to her 15 friends narrating an infamous yet true story about one of Hollywood’s greatest filmmakers – Tarantino.In an e-mail obtained by gossip website RadarOnline, Beejoli Shah tells how she met the Oscar winning filmmaker at a party in Hollywood Hills. She says they started to kiss, before he invited her back to his house.
“Quentin looks at me and says, ‘Want to come to my house?’ We get in an SUV and off we go,” she said. “We get to the house, which is gorgeous, and after a lengthy film discussion, Quentin suggests we head to bed, which is the point where I really start panicking.”
Beejoli, 23, describes how there is a little more foreplay between them, before Quention asks her “without a doubt, the strangest question in the history of my life.

“Quentin Tarantino asks, ‘Can I suck on your toes while I j**k off?’ What. The. F**k?
She wrote, “At this point, QT puts an arm around me and I’m acutely aware that Quentin Tarantino has an arm around me. As are my four friends, who are all looking at me as if I have grown a second head. To be fair, I am easily the most uncool out of all my friends so the fact that anyone even mildly famous wants to speak to me is pretty shocking. He’s chatting with my friends and I like it’s no big deal, I am pretending like this happens every night of my life, and out of nowhere he leans in for the makeout. Yes. True story.”
So what about this incident manages to rip his image apart? The juice of the story lies in the rather descriptive pictures she paints rather eloquently in her mail.
Quentin invites Beejoli to his place and she willingly hops in the car. After another make out session in his SUV, the two hit a photo-booth for some clicks and evidence for the young lady that she spent time with QT.
“I spot a photo booth and immediately realize that we must take photos, if for nothing else, proof that this story even happened. We get a few good photo strips, which I immediately buried at the bottom of my purse lest he take them from me, and go on talking about film.”
Post the photo session, Beejoli claims that they hit his bar with vengeance and the sexual tension between the two reaches a whole new level. At this point, she is reminded of the fact that she wasn’t even wearing sexy panties!
She wrote: “The make-out continues for a while longer, and I’m really getting nervous about where the night may lead, kicking myself over not pretending to be more drunk and “passing out”, and wishing he’d turn the damn lights off so that he won’t notice that I’m wearing Hanes Her Way underwear the size of Canada.”
Moving on, in her word Quentin’s sex appeal fizzled out the moment she saw his penis. Beejoli wrote: “We make out some more, there’s a little below the belt action that I try to avoid, as QT has the most unattractive penis I have ever seen (short. fat. nub-like).
Predictably yet funnily, Quentin Tarantino asked her if he could jerk off while sucking her toe! A shocked Beejoli then goes on to describe the “weirdest” ten minutes of her life. She wrote: “And thus began the weirdest ten minutes of my life – having my feet made out with by an Oscar winning filmmaker while he pleasured himself. No bodily secretions were ejected anywhere near me or my feet, and just as I hoped, we went to bed right after.”
In the morning, the author of this mail was dropped back home by Quentin himself.
“Most insane experience of my life, and without a doubt, probably the best story I will ever get to tell.”
This story is heavily one sided primarily because QT never blogged or e-mailed anyone about this incident.