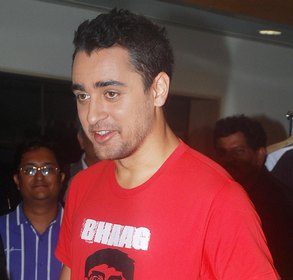 Rushes of ‘Delhi Belly’ foretell a huge opening of the flick. Lead actors Imran Khan, Vir Das and Kunal Roy Kapoor have set the expectation high especially among the youth of the nation, thanks to the ‘DK Bose’ song and some real wacky numbers in the film. But the girls in the film are missing out altogether!
Talking about the promotions, it`s being observed that only the boy’s gang – Imran, Vir and Kunal Roy Kapoor are spotted at various promotions of ‘Delhi Belly’ and girls are nowhere to be seen. Neither of the two actresses – Shenaz Treasurywala and Poorna Jagannathan was seen doing any promotions for the film.
When asked as to why girls have been kept out of it, Imran said, “This is actually an out-an-out guys film. And the story is about three boys. There`s nothing much to do for girls in it.”
It seems that the team of ‘Delhi Belly’ is relying more on the musical front rather than cashing in from the beauties in the flick.
Talking about the growing popularity of some craziest songs in the film, Imran said, “That`s the nature of our industry. Indian audience likes music very much. So yes! I think it`s very fruitful to have at least one good song for a film to work.”