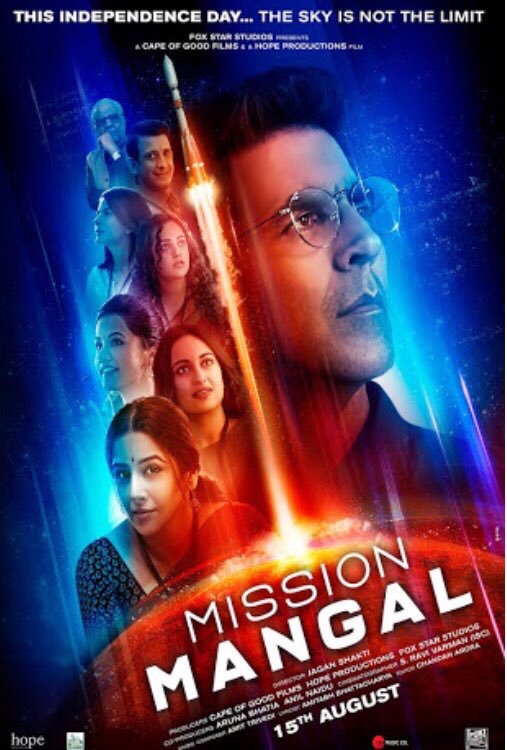 Everyone at one point or another in their childhood has dreamt of outer space, dreamt of being an astronaut, dreamt of being a scientist….And the movie ‘Mission Mangal’ plays with that very sense of nostalgia. Filmi Files is the best spot for tinsel town new and gossips.

It is the story of how a group of underdog scientists achieved an impossible mission.

Punctuated here and there with a little humor, interspersed with family drama and sprinkled with little patriotism and nationalism,this movie got a big opening today on the 73rd Independence Day, and is expected to go higher from here.

There are a few ideas that the film revolves around and on the basis of these ideas the films wishes to do it’s business too.

The film opens with an all sufficient, independent woman who seems to have answers to all the question, be it of science or of the family. This is one idea.

This is one idea, i.e. the idea of the smart independent woman who overcomes society, life and work with equal grace.

The second thing of note is the fact that the Mars mission is initially named ‘MOM’ and even though it is an acronym, Dattatreya at one point remarks that had the mission been named ‘dad’ the sattelite would have been stuck orbiting the earth.

There is also a too deliberate metro fight scene between the team comprising mostly of women and a few men.

It is also not lost on anyone that the team constituted by R. Balki and Jagan Shakti is comprised mostly of women.

All of this comprises the second idea that the movie tries to evoke: the idea of the united force of women.

I really appreciate both of the above idea but I wish more time had been spent in nurturing them through the writing to make them truly effective.

The Mars mission isn’t a feat only for India, it is a feat for humanity. It is a testament to the combined knowledge and research of scientists all over the world.

It was an event for humanity and to reduce it to one country, whose government as the movie itself points out did not even release funds for it, is too narrow minded.

What else is narrow minded was the fact that everything in the movie has been simplified to a level that the struggle goes mission.

In between the struggle of the puri, and the plastic, the pregnancy and the bossy husband, everything actually like the NASA returned scientist Rupert Desai remarks, seems to be propelled by emotions and dreams, even the mission.

Nevertheless I congratulate Jagan and Balki that they could made Mission Mangal happen and I really hope we see better, sharper work in the genre un the times to come.

Surprisingly, the cast of the movie performs the same function that its fictional counterpart performs in the storyline.

Tara or Vidhya Shinde is head of the team, responsible for the scientific and strategic breakthroughs of the mission and responsible for keeping her family sane despite her bossy husband and she is also the audiences’ anchor during the film.

Rakesh or Akshay is the smart eccentric man whose family we are never given a glimpse, making him seem like a ghost that doesn’t exist.

The part of Rakesh Dhawan along with that of Tara Shinde is that of the progatonist, whose actions are justice in the light that he is the protagonist. Sonakshi Sinha and her character both come out well in their limited capacity.

Tapsee Pannu and Nithya Menen too are convincing. Kriti Kulhari and her character aren’t explored enough. Parmeshwar played by Sharma Joshi comes into the story and fades away and Dattatreya doesn’t get enough comic space.

Amit Trivedi and Amitab Bhattacharya give us two good songs and the background score too sits well with he audiences.

I ‘space experience’ that many people might be looking for is absent because the story takes place mainly on Earth and even when the mission is launched into space the effects aren’t overwhelming.

All in all, the film can be matches once, especially if it’s a holiday and friends are at hand.

Other Related Tags: Film Review: “Batla House”, When ‘Fifty Shades of Grey’ Echoes in Parliament!, Five Films On Kashmir That We All Admire!, ‘Chhichhore’ Trailer Dropped On Networks, Shah Rukh Gears Up For Indian Money Heist!