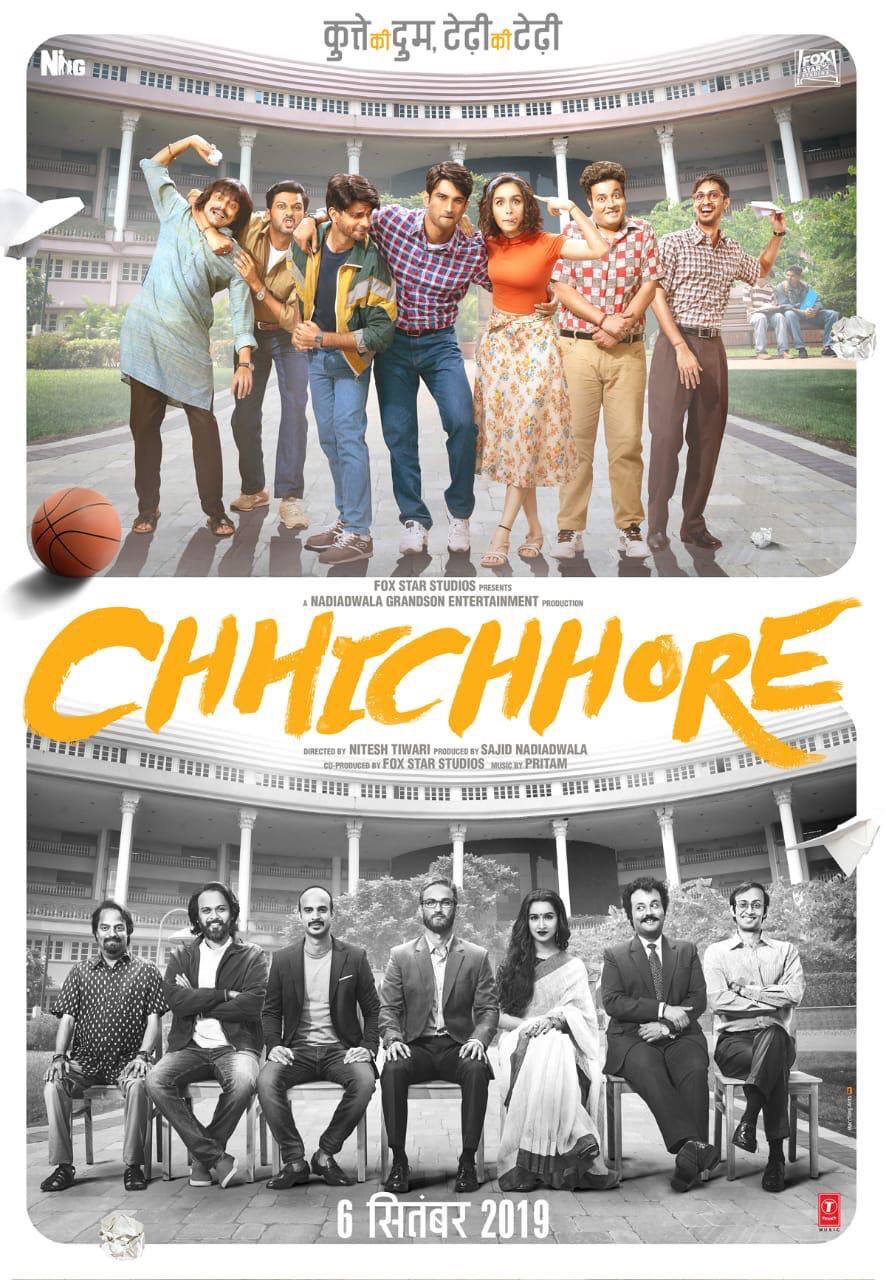 Chichore, a word that is used extensively for “boys” who are not well-behaved or who don’t follow rules but you’ll never hear this word once in the 146 minutes long runtime of movie with the same title. Keep on reading to know about Film Review Chhichhore.

So why it is called chichore ? Well that question hardly stikes you and even if it does then it doesn’t bother you because you have got enough moments in the film to think of rather than figuring out why it is named chhichore.

Nitesh tiwari the guy who struck “Gold medal” with his first movie is back again. This time not with an established superstar, not with a success story and with a non-holiday release.

And the biggest risk that Nitesh takes with this film is it’s plot, which is exactly opposite of his first Blockbuster.

The story of chhichore revolves around Aniruddh played by Sushant singh rajput and Maya played by Shraddha Kapoor who have separated after marriage. They are both trying to prove each other’s fault during which their son tries to commit suicide when he comes to know that he has failed in IIT entrance.

While the doctors are trying to cure him with medicines and even surgery. Aniruddh tries to get him back to life with typical bollywood formula. What follows after is a two hour long stretched version of 3 idiots’s “Jaane nahi denge tujhe” and “Jo jeeta wahi Sikander” mashup.

What works for Chichore is it’s rawness, it’s not covered like other college dramas. It is unapologetic about the stupidity of it’s situations and characters on a level that after a while you start loving it.

Talking about the performance the biggest let down for this flick is it’s lead pair Sushant Singh Rajput and Shraddha Kapoor. You can still see MSD in sushant while he is walking in his campus, more over that he looks like a guy high on testosterone injections in his 40s. I personally don’t know why Shraddha Kapoor after her so many performance failure’s is still “in demand”. She is the weakest actor and character in the film .

The film also stars pratik babbar who surprisingly looks like college version of “Sonu Sood villainism”. Mohammad samad who plays the son of the leading duo is good in his parts.

While the actors have done complete justice to their characters (except the lead duo) the fact that none of them looks like a first year student may bother you. It would have been better if the director had used a younger cast.

Apart from casting the most flawed thing about the film is it’s screenplay which is consistently inconsistent. It rushes in first 30 minutes then suddenly drops in second half and then picks up the pace. Unlike dangal this movie is not that good when it comes to evoking emotions. Read till the end to know what’s at the end of film review Chhichhore.

The one good thing about the writing is the screen space, almost every character has got enough time to prove its importance in the storyline. Tahir raj bhasin’s character is one of the things that saves the movie from its lead actor’s ordinary performance.

Talking about direction, Nitesh tiwary this time tries to do something that is exact opposite of his earlier flick. This time he is explaining you the importance of losing instead. And in this process he doesn’t lose you even in the dullest moments. And that is where you know that this man is not an one time shot. He is here to stay for a long time.

The only thing that you will badly miss in this film is the music, pritam’s music and amitabh bhattacharya’s lyrics surprisingly don’t weave the magic one expects from the duo. Except Khairiyat( which is there in the film for just 10 seconds) there is nothing good to remember about the album. Filmi Files are the best place to check out movies reviews online.

At last we would say that Chhichore is not 3 Idiots but it is also not SOTY, it carries a philosophy that we very often see in bollywood movies or in cinema general. It doesn’t have any heroes or villains, it has memories that are enough to keep you engaged in it for more than 2 hours. Hope you like the complete film review Chhichhore.

Go watch it with your friends and chhichoras.

Click here to know more in detail about Michael Jackson: The Man, The Myth, The Legend