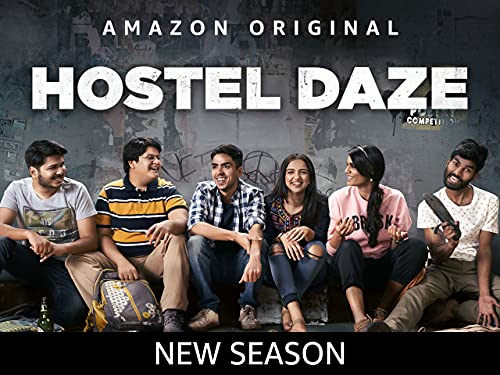 Have you ever stayed in a Hostel? If not, you should, because only then will you know about things you don’t have to do in life. In the past few months, OTT platforms have thronged with new releases. Isn’t it amazing that each weekend you can spend watching a fantastic series? A student’s life is just incomplete without a hostel. And, by the hostel, I mean what comedian Anubhav Singh Bassi said, not what you saw in 3 idiots. And, the wait is finally over for the fans who are keenly waiting to watch the second season of “Hostel Daze”. All the episodes of the series are now available on Amazon Prime Video.

So, let’s start from scratch. What is the first thing that comes to your mind after listening to the term “HOSTEL”? Maybe friends, fights, mess food, small untidy rooms, that one eye contact to your crush, maggie, ragging, smoking, or drinking, and let me tell you this is a never-ending list.

Even if it is said that “no one person is similar to another” but this hostel life treats them all the same. To sum up, all of these let me just quote a dialogue from the series that, “Hostel is like one hypothetical girlfriend who is neither demanding nor complaining. And, at least 4-year relationship is fixed”.

And another patent dialogue that all the seniors have for their juniors is, “Iss Saal Ka Toh Batch Hi Barbaad Aaya Hain”. Now, you may find all the above things messed upright. But that is how hostel life is? So, let’s now jump into hostel daze season 2.

Before starting a movie or series you must know about the characters. So, let me introduce you all to the main characters of the series. And, one common code that applies in all hostels is that you are known by your hostel name and not your real name. So, the first character is Nikhil Vijay aka Jatin, and the hostel name is “Jhantoo”. He seems to have a big rivalry withcleanliness.

Being an engineering student, he does all the deeds apart from studying. Second, is Luv Vispute aka Chirag Bansal. So, he is that guy in your group who is the unofficial professor. He is the topper and always follows rules, but doesn’t get a follow back from rules. The third is Shubham Gaur aka Rupesh Bhati and the hostel name is “Jaat”. So, Jaat wanted to play sports, but he chose mechanical engineering with the donation under his parent’s pressure.

The fourth one is Adarsh Gourav aka Ankit Pandey and hostel name “Dopa”. That guy who is hungry for fame. But he knew is not the intelligent one. So, he chooses to supply age-restricted content in the hostel. Apart from this, we have other characters such as Ahsaas Channa aka Akanksha, Harsha Chemudu aka Ravi Teja, Ayushi Gupta aka Nabomita.

Now, let’s move towards the series. Directed by Raghav Subbu, Hostel Daze 2 is an original TVF (The Viral Fever) creation in collaboration with Amazon Prime Video. It is like a bonus package after the success of Kota Factory. Hostel Daze is an adult comedy-drama. The first season was released on 13th December 2019 and was highly praised by millions of viewers. As you all know the story revolves around the life of engineering students and hostel life. It’s the story of a dorm that is marred by the misfortune of four students and roommates united by fate. The second season starts with a bang where Jaat, Jhantoo, Chirag, and Ankit are seniors now. And, the decades-old tradition of ragging is followed. But this is a smart batch so they believe in planned ragging. Once the boys are done, the juniors are sent to the girl’s hostel where Akanksha and Nabomita are all set to take their case. And, on the other side, we have Chirag who is strictly against ragging. He says “Ragging without consent is wrong”. He tries to educate a fresher about hostel rules. But, what does Chirag get in return, “Punishment”. Well, this is just a small trivia of the first episode, DISCO. Hostel Daze 2 has 4 episodes each of 30-35 minutes. To make it facile to understand, let me just keep it blunt. Each story, each moment, each dialogue seems to be relatable. Whether it is Jaat and Jhantoo fighting over a girl, Or Ankit and Akanksha’s moment.

The reason behind the success of the previous was the reality check. The makers of the series and all the actors have done a great job. Ahsaas Channa is known for proactive roles in youth, praised comedy videos and vines.

Have you heard about love triangles? I am sure you do. But, Hostel daze 2 has got love-square for you. The phrase “Jab Ghee Sidhi Ungli Se Na Nikle Toh Ungli Tedhi Karni Padti Hain”, applies here. Engineering boys can have the guts to fight with their faculty but no guts to propose their crush. So, Jaat has a crush on Krutika Deo aka Unnati. But that ruff n tuff guy can’t propose to her directly. So, he decided to impress her friend Arushi Chawla aka Charu. And, this is a vice versa for Unnati also. He tries to impress Jhantoo because she likes Jaat. And, this love square does not have a happy ending.

Society thinks girls and cleanliness are BFFs. But, have you ever asked a girl how she wants to stay? That’s the peer pressure every girl has to go through. So, Ankit has a crush on Akanksha. But she seems to be a queen of state named, “Sab Kuch Saaf Kar Dungi”. And, Ankit (Poor Guy) is an emperor of a region name, “Kuch Bhi Nahi Karunga”. How is this duogoing to work? Will Ankit go against his hostel culture and clean the room? Or, is the story something else? Well, no spoiler alert, you must find out yourself.

However, the flow of the series went smoothly and perfectly. But What we show does not always reflect what we feel? In the last episode, “Ghar Wapasi”, the show went on an emotional roller coaster ride. It’s true that in Hostel we fight for washroom, food, girls and a lot more things every day. It’s more chaotic than a fish market. But, once you adopt this lifestyle, you can’t settle somewhere else.

Not even in your home. Students always wait for holidays so that they can just rush to their home. They always think home is the best place and that’s true also. But you miss that chaos again. Why? Because that’s a part of your life. You can’t roam like a carefree creature at your home. But Hostel is a place where nobody asks a question.

And, to be very honest, I didn’t expect this end to the series. Because all these times like in the first season also, we saw only the happy and fun side of hostel life. But, just like life, it needs variation. So, the series ended on an emotional note. Overall, in my opinion, the series was amazing. It has not left a single aspect of hostel life.

For those who are staying in a hostel, you can’t find any other series to be this relatable. It’s your story. And, seriously Hostel is your friend’s circle. You can love them, you can hate them, but you can’t live without them. You can also watch the video of this review on YouTube in Hindi.

One thought on “Review of Hostel Daze 2: You Can Love Me or Hate Me but Can’t Live Without Me”