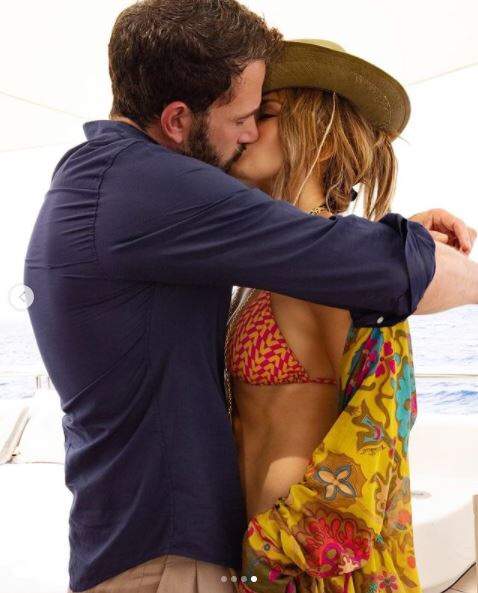 Jennifer Lopez appears to be in love. Her latest post on Instagram is a proof. Recently, the American singer, actress, and dancer celebrated her 52nd birthday on July 24 with Ben Affleck. J.LO decided to ring her 52nd birthday with a special announcement. Jennifer and Ben have finally decided to make their relationship Instagram official not just with any ordinary photograph but with a hot photograph of the two.

The stunning beauty posted many pictures on her social media handle wherein she was seen sporting a bikini and the photo that made jaws drop was the one wherein she was seen kissing Ben. She did not write any detailed caption for the photos that she shared on her social media account. The singer simply wrote, ”52..what it do…”. Meanwhile, she neither tagged Ben in the pictures nor she mentioned Ben anywhere. and Here are the photos:

Jennifer decided to go on a birthday vacation and was seen enjoying on a yacht in France. This is where Jen decided to get herself clicked with Ben and make an announcement to their rekindled romance.

For the uninitiated, Jennifer Lopez and American actor Ben Affleck have been in news for some time now as the duo started going out together again. Earlier, J.LO post with Ben was seen on social media through her friend Leah Remini whose birthday bash witnessed the two posing together in a loved-up photo.

Here are some more pictures:

Meanwhile, reports state that Jennifer and Ben aka Bennifer will not move in together in near future. Jennifer resides in Miami and Ben lives in Los Angeles. The main reason given for the two not moving in together is that Ben has been comfortably settled in his home and it is close to his children while Jennifer does not want to leave her home as well as it is good family home, claim a source.

Jennifer and Ben do not feel the requirement for either of the two to relocate soon. They have been back and forth to each other’s house and reside close enough, added reports. Additionally, Jennifer and Ben have their children as the topmost priority even at this juncture of their relationship. Lopez have two children with ex-husband Marc Anthony while Ben has three children with ex-wife Jennifer Garner.

Past relationships of Jennifer Lopez

Jennifer has an extensive dating history and here is everything about the singer when it comes to her past relationships, flings, and exes:

Singer Jennifer and Rodriguez reportedly began dating in the year 2017. The couple hit off instantly as they had too much in common. They had Latin roots and both had liking for New York and their children.  The couple called off their engagement in March 2021.

Jennifer Lopez and Drake’s romance did not last for a long time and they just had short-lived fling. They were linked for a couple of months in the year 2016. Reports stated that their relationship was fake and it was merely a publicity stunt so that they both could publicize their record together.  If they were serious about their relationship they would have been more private about it.

Jennifer also reportedly dated Casper Smart who was 17 years younger to her. Their relationship lasted for nearly 2 and half years. Their romance began in the year 2012 and the split happened in 2014. The split occurred when reports claimed that Smart had reportedly been sexting with two transsexual models. Lopez and Casper reunited again in 2015 and broke off in 2016.

Lopez romanced fellow Latin Music superstar Marc Anthony in 2003 and the couple soon said “I dos” in June 2004. Marc had divorced former Miss Universe Dayanara Torres before settling with Lopez. The couple welcomed their twins in the year 2008 and parted ways in 2011. Lopez later said that collaborating on their 2017 Spanish language album was in a way helped in repairing some parts of their relationship that got fractured from their marriage and divorce.

Lopez romance with Ben Affleck lasted for a brief tenure. The two met while making “Gigli” in the year 2001 when Lopez was still married to Cris Judd. Lopez and Affleck got engaged in the year 2002 in November. Lopez had ordered a $15k gown from Vera Wang but soon the two broke off two days before the ceremony.  Lopez had then said that Affleck was her first big heartbreak.

The singer’s second marriage was to choreographer and dancer Cris Judd. The couple reportedly met in late 2000 when Cris was recruited to direct her music video. The got married in September 2001 and parted ways in June 2002.

Jennifer met with Diddy in 1999 and their relationship instantly blossomed. The couple was arrested in the same year after they escaped a New York nightclub where a shooting incident had taken place. The couple announced their split in the year 2001.

Lopez had tied the knot with first husband Ojani Noa, a Cuban waiter in February 19977. Their marriage lasted just 11 month and they announced split in January 1998.