Alia Bhatt made her Bollywood debut as a 19-year-old in 2012, and in just eight years, she has grown to become a household name. After capturing the eye of the world as the vivacious Shanaya Singhania in Karan Johar’s Student of the Year, the actor went on to play a diverse range of characters, each with their distinct personality. Bhatt has received numerous awards for her efforts in some of her most memorable films, including four Filmfare Awards, and her upcoming ventures appear to be as interesting as her previous ones. We’re taking you through a list of some of the star’s most powerful projects before fans get to see her turn into one of Mumbai’s most feared ladies in Sanjay Leela Bansali’s Gangubai. If you haven’t seen them yet, now could be a good opportunity to do so!

Highway, directed by Imtiaz Ali, was a watershed moment in Bhatt’s career; she was no longer the new kid on the block. With only one film under her belt at the time, the then 20-year-old actress stunned fans and reviewers with a subtle and genuine performance. Bhatt plays Veera Tripathi, a Stockholm Syndrome sufferer who builds a bond with her captor, Mahavir Bhati, in the film (Randeep Hooda). Her moving performance earned her her first Filmfare Award for Best Actor (Female) in Critics’ Choice for her work in the film. With such a grey shade and painted over a colorful terrain, this is a fantastic piece of art!! Alia Bhatt has a lot of talent, and RandeepDuniya Hooda is a fantastic actor. Imitiaz Ali understands the essence and heart of a woman and brilliantly recreates it… a MUST SEE FILM!!

Bhatt has a minor but significant role in Udta Punjab, a film portraying the prevalence of drug misuse in Punjab’s underbelly. The actor reportedly prepared for the role of a Bihari hockey player turned farm laborer who gets sucked into the world of drugs by throwing away her smartphone, according to reports. Her portrayal of an illegal migrant is regarded as one of her most ferocious, and the film remains a cherished part of her filmography. Yes, a toast to filmmakers, but the setting of the film is unpleasant. Initially, everyone agreed that there is a political character in the film who should not be there. That is just incorrect. Nothing like that is depicted in the film.

Shahid Kapoor and Alia Bhatt both play pivotal roles in this film. Given that this was Diljit’s first film, he performed admirably. In conclusion, I thoroughly loved the film.

2 States was much more than a nice love story based on historical events. It was cheerful, passionate, and artistically stunning. Alia Bhatt provided her fans with a character in Ananya Swaminathan, a South Indian girl who falls in love with Krish, a Punjabi guy, who was as accessible as she was inspiring—a modern woman who defies the odds for her love while remaining true to her roots. It’ll give you a fluffy slice of life if you watch it. Though some sequences of intimacy should have been cut, this is an excellent family film that, curiously enough, teaches you something about why, how, and when family matters. Don’t anticipate the stars, and you might just fall in love with this Bollywood romance that isn’t quite what you’d expect. Take a chance!

Alia Bhatt had one of her best, most honest performances in Dear Zindagi, which followed the life journey of a young lady struggling to combine her job with her emotions, eventually finding a new perspective on life with the help of her therapist, Shah Rukh Khan. Dear Zindagi encourages viewers to love their lives as they are: imperfect, untidy, and often flawed. The plot is as simple as it gets while also being extremely complex. It sparked a lot of contemplation. It alters the way you view your life and your fate. Gauri Shinde, who is known to put out something extraordinary, has put in a lot of effort and class in this story.

Alia Bhatt stepped into new terrain with Raazi, a thriller based on the novel Calling Sehmat. Bhatt, who is known for her aggressive, boisterous characters, morphed into a charming, sympathetic, and naive Delhi University student in the first part of the film, and then into a spy in her own husband’s home in the second half. With his gloomy drive and noble demeanor, Bhatt’s character captivates the audience. The INS Rajput sank the Pakistani submarine PNS Ghazi off the coast of Visakhapatnam thanks to Sehmat’s discoveries. Nikhil Bakshi finishes his speech, surrounded by officers, including Sehmat’s son, Samar Syed. Meanwhile, an elderly Sehmat can be seen sitting on her chair, peering out the window of her out-of-the-way home.

“Agar duniya mein sab comfortable hote toh rap Kaun Karta?” asks the character MC Sher (Siddhant Chaturvedi) in the film. That’s the kind of information that only a true admirer of the performing arts can provide. ‘Gully Boy,’ directed by Zoya Akhtar, is the ultimate look at India’s rap scene. It tells the narrative of Murad, a young boy from Dharavi who has huge goals and refuses to let misfortune crush his spirit. To say the least, his journey from being the typical slumdog to becoming an aspiring rapper known as Gully Boy is amazing and exciting. Rap is an unusual genre of music in India, but even those who aren’t familiar with it will appreciate the underdog and heartbreaking story, with an amazing, bold performance by Alia Bhatt.

7.Student of the Year 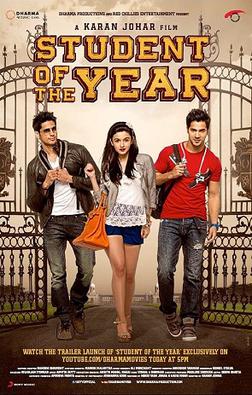 Varun Dhawan’s character Rohan Nanda is a spoiled brat, while Sidharth Malhotra’s character Abhimanyu Singh is a middle-class scholarship student. The narrative of Rohan and Abhi’s friendship and the fallout is a school legend, much like Rahul and Anjali in Kuch Kuch Hota Hai. However, all too often, this bond is suffocated by the overabundance of glitz, flawless styling, and show-stopping songs. The entire plot revolves around a school competition that is so ridiculous and shallow that it’s difficult to take it seriously. Alia Bhatt somehow becomes a winning trophy whilst the competition for becoming the Student of The Year goes wild. With excellent songs, dance sequences and the glory with each of the debutant actors has played their role, this is definitely a must watch!

There, Bollywood lovers! Here’s a list of movies you can watch anytime- trust Alia Bhatt to truly give out some great acting performances of all time! Let us know if you agree with us too!

One thought on “Best of Alia Bhatt: Top 7 Must Watch Movies”