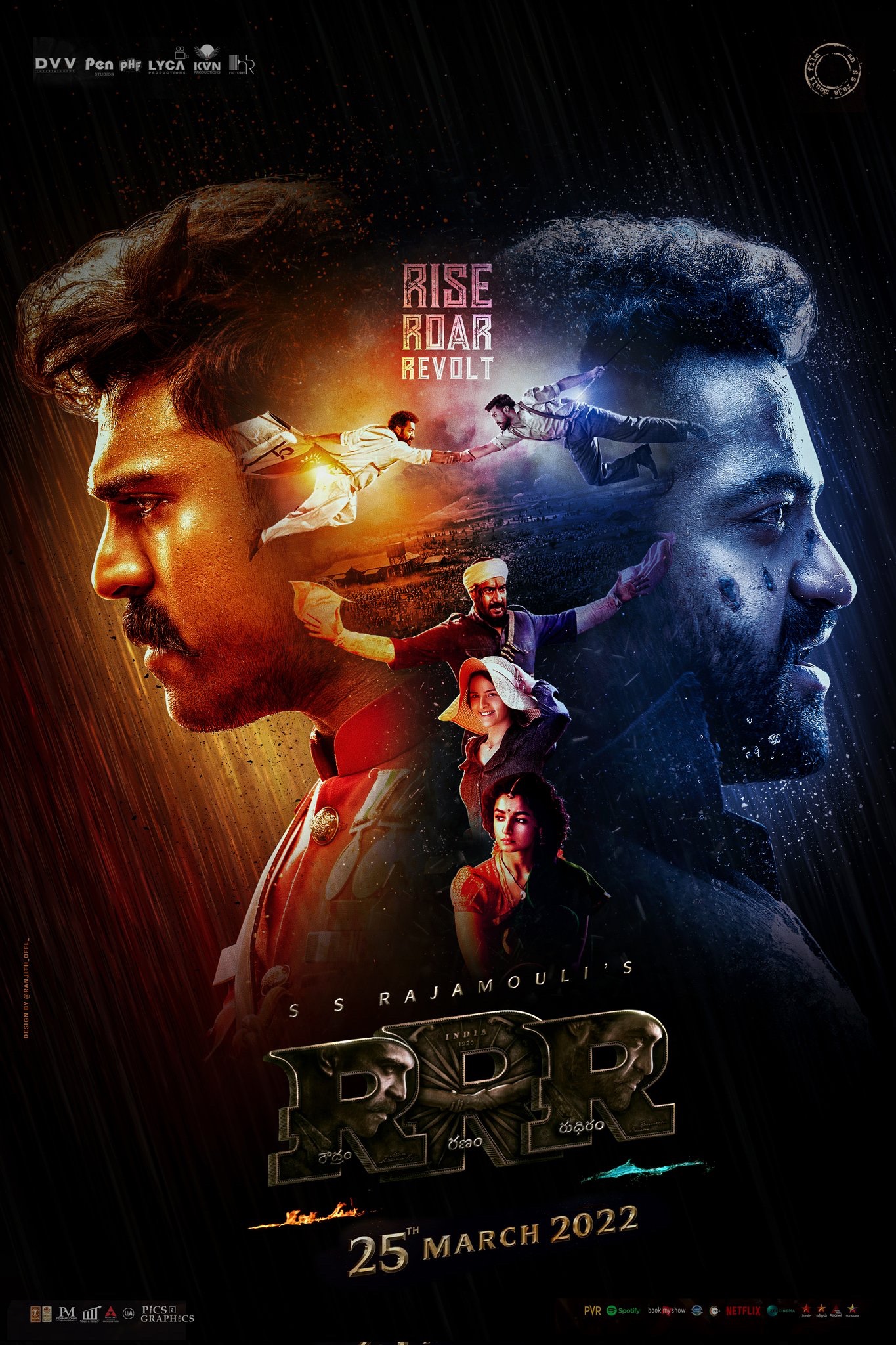 With a roaring international hit film, Bahubali, Rajamouli grabbed everyone’s attention in India and beyond. He has managed to create several magnum opus films so effortlessly in the last decade and RRR is another jewel in his crown. RRR is a once-in-a-lifetime-experience kind of film with heavy visuals, CGI, VFX, music and mainly the star cast. RRR is like a delicious dish with all the right ingredients and the credit must go to Rajamouli.

The film is set in pre-independent India in the 1920s where Indians were struggling to free themselves & India from the Britishers. It starts with an emotional scene when a snobbish & cruel British Governor’s wife forcefully takes away a little girl from a village in Telangana and almost kills her mother so mercilessly. The next scene introduces Ram Charan AKA Rama who is depicted as ‘Fire.’ He is a mighty & strong British police officer who is literally as fierce as fire. He looks so intense and despicable in the beginning, that the audience stops breathing for a second. Jr Ntr AKA Bheema is characterized by ‘water’ because of his innocence and calm demeanour. Bheema is resolute about bringing the little girl back to their village.

Although Rama initially decides to incarcerate Bheema to bag promotion from the British officials, both of these revolutionaries end up fighting together and against the British Raj.

The story sounds pretty simple, contrary to the powerful depiction in teasers and other glimpses into the film. But, it’s Rajamouli. A visionary director who raised the Indian film industry’s stature on the global stage.

The characters played by Ram Charan & Jr Ntr were pre-independent India’s celebrated heroes who never met but Rajamouli brought those two revolutionaries together to create a fictional story of what would’ve happened if they had met in real life. Komaram Bheema played by Jr Ntr was a rebel and revolutionary leader who gave the slogan of “Jal, Jungle & Zameen”, while Alluri Sitarama Raju played by Ram Charan was a freedom fighter. Ajay Devgn’s short cameo in the middle of the movie was one of the many impactful moments in the film. While Ajay Devgn plays a crucial role, which has a brief backstory, Alia Bhatt, who played Seetha, gives the story a more forward approach. The Hollywood actors, whom Rajamouli brought onboard for this film lived up to the hype and left no stone unturned while depicting britisher’s roles. Olivia Morris played Jenny; a kindhearted British lady who is a sweetheart, Ray Stevenson portrayed a cruel, merciless British governor,Scott, who treats Indians as slaves.

If you have watched SS Rajamouli’s previous movies, you must have already been habituated to pre-interval bangs & RRR is no different, in fact it’s a notch higher. There is no dearth for power packed action sequences in the entire film. Given the fact that RamCharan and NTR are starring alongside in the film, two young and energetic heroes of Tollywood, every action scene is an eye-feast for the fans. Mr. Jakkanna is a pro when it comes to action sequences. I mean, do you still have any doubt after witnessing his directorial deft in Bahubali’s war scenes? Well, his ability to melt the audience’s heart with emotional scenes and subtle storytelling skills are no less.

The BGM is such a mood-lifter that it needs a different review for how powerful and impactful it is. The most playful song ‘Nacho Nacho’ is already a catch for the audiences and you must have seen people tapping their feet to this fast-beat song in Instagram reels.

RRR is a massive 550 crore budget movie that was announced 5 years ago in 2017 after Rajamouli’s yet another masterpiece Bahubali 2: The Conclusion. The actors in RRR have sealed their three years of call sheets for this movie. This film is already a blockbuster and has managed to earn over 500 crore rupees in the span of just 5 days. Critics are already in love with this film and the leads, Ram Charan & Jr Ntr, and praised them calling it their career’s best performance. The bromance between both of Tollywood’s handsome hunks worked out so well that they managed to remind the audience of Jai Veeru.

Overall, RRR is a successful entertainer of the year. Yes, it is still three months into 2022 but critics are already giving their verdicts and voting for RRR as the best entertainer of the year. Even though it is a fast paced film, you will never feel bored anywhere in between this 3 hour 10 minutes long journey. There are even moments that’ll make you jump on your seats

So, in short, RRR is a paisa vasool movie.