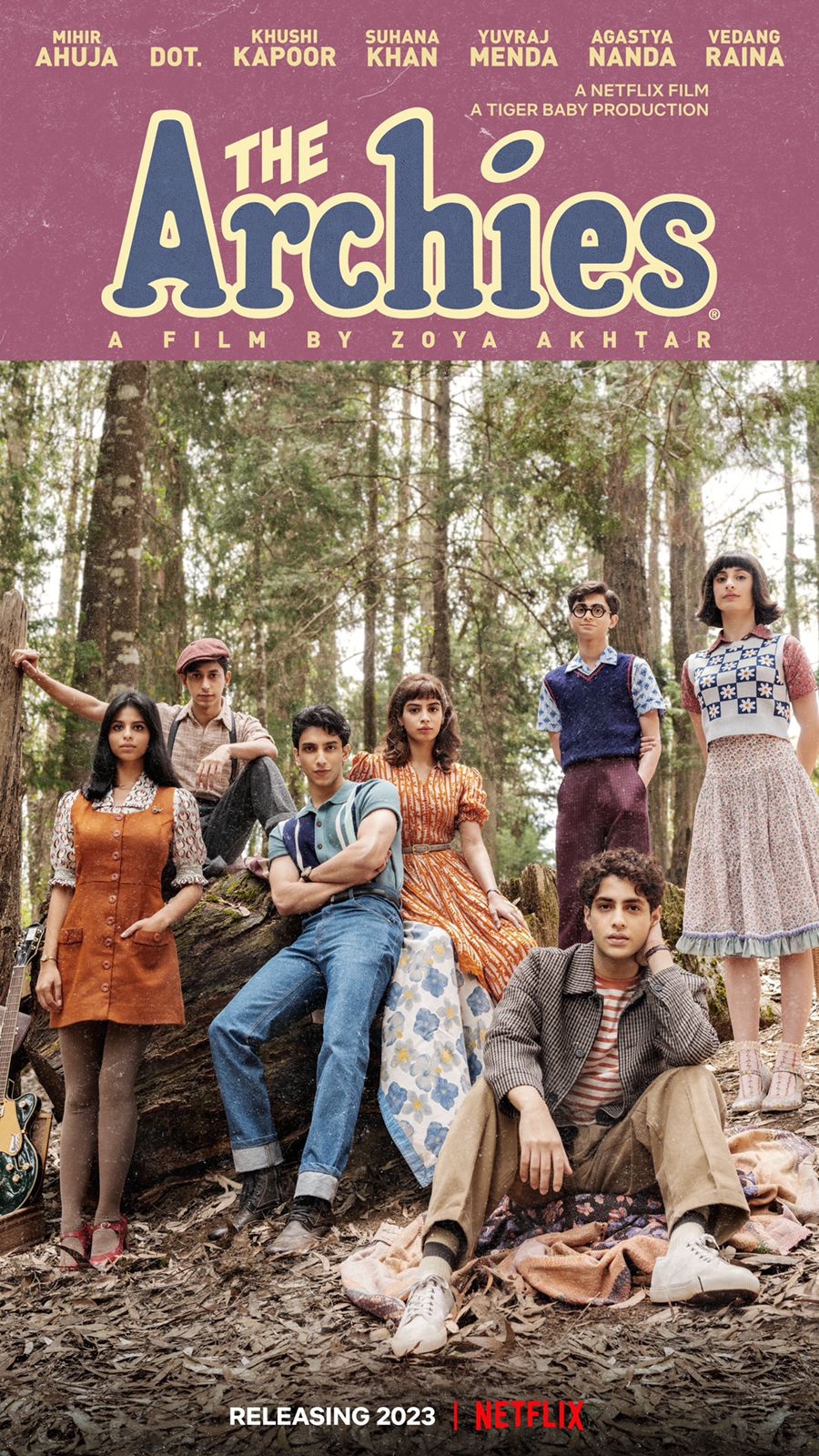 The outfits, the hair-do, the bonding, damn—even their smiles, everything looks bogus in the brand-new poster of Zoya Akhtar’s upcoming flick The Archies. From the title, first look, scene-setting, and the casting, everything reeks of nepotism and appears like a European-movie rip off or a 1950s version of the popular Hollywood TV show Friends.

A few days back, social media netizens freaked out at the first look of Zoya Akhtar’s The Archies. The star-studded movie has broods of many leading film industry people: Sharukh Khan’s daughter Suhana, producer Boney Kapoor and Sridevi’s daughter Khushi Kapoor, Amitabh Bachchan’s grandson Agastya Nanda. The film also stars Vedang Raina, Mihir Ahuja, Dot, and Yuvraj Menda. The creators of the film have also collaborated with The Archies comics. The question however is, why is there a segment of Bollywood that’s hell-bent on imitating the west? What’s this obsession with re-creating characters belonging to 1940-50s America, when we can easily find inspiration in Hindi comic characters such as Billu and Pinki?

What’s this fascination with the west when there’s so much that can be explored in terms of ‘desi’, why is this desire to fall back on western creations? Hardly was there a Bollywood movie along the lines of The Archies that achieved global recognition. Instead, movies such as Lagaan and Slumdog Millionaires are appreciated in the international scenario. Meanwhile, the South Indian counterparts are working up their mojo and going on par with these so-called filmmakers who are always promoting nepotism, crass filmmaking, baseless skin-show, and worst of all—copying the west in terms of story, screenplay, characters, style, language and much more.

Perhaps, these filmmakers forget that the Indian crowd would rather listen to desi ‘maa-behen ki gaali’ instead of being bombarded with the F-words. These days, even on-screen cussing seems more like Hollywood than Bollywood in a Hindi movie.

Let us take a quick sneak peek into the South Indian movie industry that is slowly but surely creating ripples at the box office.

In the past 10 years or so, the South industry has made great strides in VFX technology, developing an original screenplay, breaking old records by setting new ones and entering the prestigious Rs. 100-cr club, earning accolades among non-South Indian fans, often crossing the 100 crore mark at the box office, with ear-pleasingly fantastic music, adding uniqueness in terms of characters, heroes, heroines, VILLAINS, anti-heroes, movie technicalities, and whatnot.

Let’s take for instance the songs from Pushpa: The Rise. Songs such as ‘O Antava…Oo Oo Antava’, ‘Saami Saami’, ‘Srivalli’ took the global audience and even celebrities on a storm. The idiosyncratic choreography, and the desi-appeal, all wooed our hearts like no other film song did in a long time.

At such a pace, the South Indian movie industry is all set to pack a punch in the face of Bollywood for its dependency on Hollywood scripts and plots. And it’s high time for that! Bollywood has stooped to the levels of remaking South films like Kabir, Jersey, and Drishyam 2 to survive the tough competition of the South Indian entertainment industry. It is not to say Bollywood is good for nothing—dare we forget the golden era in which the Bollywood industry kept us entertained with its authenticity and rawness without losing its personality to the vogue of Hollywood. There are still many directors and filmmakers who surprise us every once in a while, with something fresh out of the box. Ironically, most of the unique movies are the outcome of budding small, independent projects that have to go through a trail of ‘hit or miss’ in the face of Bollywood heavyweights in order to gain their much-deserved appreciation.

Why can’t we find beauty and peace in the non-frilled and untouched? Why can’t we showcase the rustic appeal of India which has a higher chance of striking a chord with the masses? We surely miss movies such as Gangs of Wasseypur which stole our hearts with their local essence. We certainly don’t wish to see pale-skinned, skinny star kids with fancy European attires as our heroes or heroines. We need a fresh breeze of air in terms of uncanny, divinely desi characters swooning us with their rugged looks and mesmerizing dialogues.

There are many South Indian actors who keep impressing us with their acting and traditional avatars every now and then. South Indian stars in the likes of Rajinikanth, Chiranjeevi, Mahesh Babu, Allu Arjun always present audiences with something fresh and never-seen-before sort of appeal, drama and charisma. Every time they grace the screen, we know something new is going to surprise us. Movies such as Pushpa: The Rise, RRR and KGF series are a testimony to this.

Gone are the days of Sholay, DDLJ, and Kal ho naa ho. Today, what often gets served on our plate is a soul-less copy of Hollywood blockbusters, or a ‘lookalike’. On top of this, many netizens complain about the fact that Bollywood movies are always trying to deride the Hindu culture with movies like PK, OMG: Oh My God!, Dharam Sankat Mein etc., Tollywood movies celebrate Hindu culture. Today, South Indian movies are not only doing better in terms of making noise at the box office but they are also building up a pan-India fan base for their movies and culture and aiming to capture their spot on the global entertainment stage. Seems like they are not far away from their goal. According to the EY-FICCI report, South Indian films have surpassed Bollywood in 2021 with great margins. The writing is on the wall, the craze for South Indian movies is here to stay. It’s high time that either Bollywood comes up with something brand new and exceptional or takes a break from being a shallow copycat of Hollywood.

(Pallavi is a Delhi based freelance writer with penchant for writing the stories from the ground. Views expressed are personal)