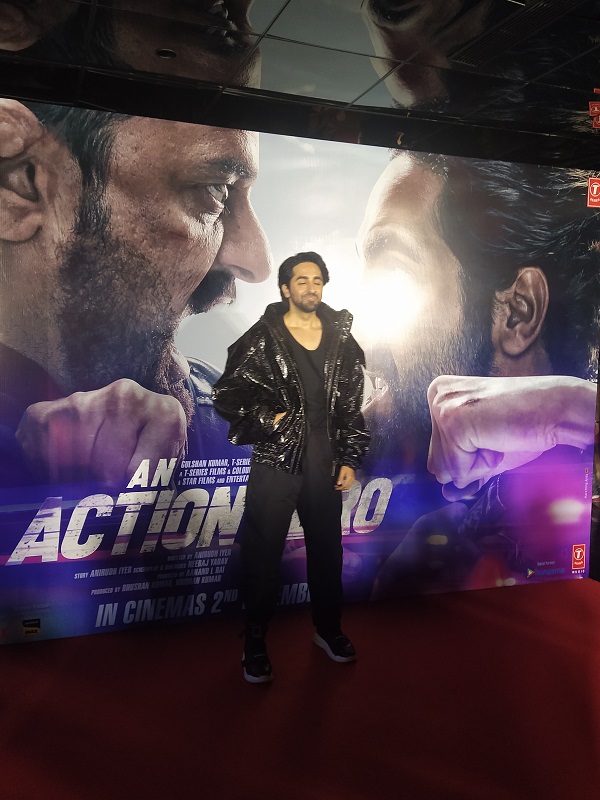 At the trailer launch of ‘An Action Hero’, actor Ayushmann Khuranna tells about how doing ‘An Action Hero’ was indeed a strategic decision to enter the mainstream commercial cinema, having played many stereotypical roles…writes Dr.Priyaankaa Mathur.

The trailer launch of ‘An Action Hero’ was held in Mumbai. Present at the preview were the lead cast Ayushmann Khurrana & Jaideep Ahlawat, director Anirudh Iyer and the producer duo Aanand L Rai & Bhushan Kumar.

Ayushmann plays a larger-than-life film star and an action hero in this offbeat film. The film also stars Jaideep Ahlawat who acts as an antagonist, impressing in his very first look, with his rough Haryanvi accent. The film is not an out-and-out action movie and rather a thriller balanced with action.

The trailer has raised anticipations about Ayushmann’s new avatar as an action hero, while he’s seen in a rugged look with guns and ammunition doing tough action sequences.

Talking about taking up this role Ayushmann said, “It was exciting to attempt this film, which is far away from the typical genre of social comedy and has no underlying message. It’s just pure thrill but with a twist. You won’t get to know who’s a hero and who’s a villain until you watch the film. The film is very topical  and relatable to the fickle nature of the film industry, media and life, and how people and media react to a particular situation.”

Anirudh throwing light on the film says, “The film is a lot more than a usual action movie, it has a mix of action, and thrill and has a very dark space. The film is situation driven and unfolds gradually, I think you must watch it to find out.”

Why Ayushman was chosen to do an action film, director Aanand L Rai replies,” Whenever we find a difficult story, the first name which comes to our mind is Ayushmann Khuranna’s, since he has the guts to experiment with out of the box twisted stories, and so this journey began from Shubh Mangal Sawdhan and continues till An Action Hero. This is an action film but with a twist, and that twist brings him in.”

The film looks like a complete entertainer, while it bestows a great comic sense with its satirical humor, action sequences, and an underlying thrill, which is for the audiences to experience. The film releases in theatres on 2nd December 2022.