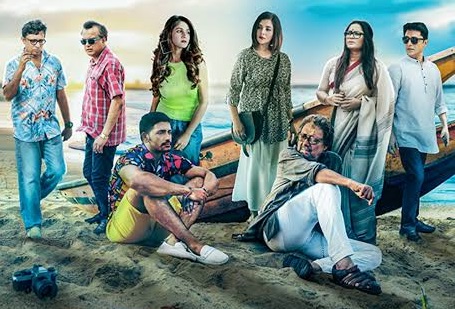 The Bengali film industry is thriving every year, producing not just popular films but also films that have received critical acclaim and address important social concerns. This is due to relatable content and a better knowledge of audience psychology. Few Bengali filmmakers of younger age are experimenting with their filming techniques.

Are you looking for the most recent Bengali film and series releases? Then you may find all the most recent releases in this section, together with frank reviews and audience ratings. Here is all the information you need to know about Tollywood’s recent films and series –

The movie directed by Dhrubo Banerjee is full of adventure, mystery, and thrill. Sona Da, Abir, and Jhinuk return for yet another exhilarating adventure in Karna Subarner Guptodhon, the third instalment of the Guptodhon franchise. The trio travels to Bengal on an invitation to a fantastic event, but their trip quickly turns into a perilous search for the region’s greatest treasure.

Sona Da played by a renowned actor in the Bengali film industry who has also played some major parts in Bollywood, Abir Chatterjee will face numerous challenges as he works to solve each puzzle, including mental and physical challenges. His loved ones will also face threats throughout the whole journey of Sona Da, which will continue until he finds out about one of Bengal’s greatest treasures.

Sampurna is portrayed in the series as a simple housewife played by actor Sohini Sarkar. The series revolves around how she fights against the abuse done by her brother-in-law to her sister-in-law after her marriage.

The director Sayantan Ghosal tactfully sketches the sensitive matter of marital rape with the narration which is strictly centered on female characters. You need to tune in to the Hoichoi app and watch the series to find out how the female power bravely opposes the injustice done to them.

The movie is directed by Kaushik Ganguly, the cast of the movie includes Ambarish Bhattacharya, Churni Ganguly, Indrshish Roy, and Ritwika Pal. The Bengali politician Babul Supriyo also played a small role in the film.

The story is based on a true incident where a child was born with four arms and the village people addressed the child as God’s child, the village where the miracle child was born was far away from the enlightenment of urban areas. It is important to watch Lokkhi Chele often until the ominous reality of Indian superstitions comes to an end.

After the hit of Belasheshe, the makers came up with yet another tale of evergreen love with a powerful performance of the actors. The movie is directed by two directors, Nandita Roy and Shiboprosad Mukherjee.

Late Soumitra Chatterjee and Late Swatilekha Sengupta were the renowned actors of the Bengali film industry who have unfortunately left us, but their seamless acting has made us hooked to the screen every time they appeared together and in addition, this was the last film of their glorious acting career. The film’s cast includes many other famous Bengali actors who have made a huge contribution to the film’s success.

The film shows the chemistry between the old couple and its intense emotional plot is going to keep your eyes teary.

Go watch the movie in Hoichoi a Bengali OTT platform and see how the chemistry between the two people evolves as they spend so many years together.

The Byomkesh Bakshi franchise directed by Arindam Sil is again back with a new film! For Bengalis, Byomkesh is an emotion. And once again Abir Chatterjee as detective Byomkesh has once again made the audience filled with nostalgia.

In the film, Byomkesh Bakshi with his assistant Ajit becomes involved in a tale of retribution when he chooses to watch a play at the theatre, and the duo witnesses a crime scene that took place on the main stage in the 1971 Bengali Naxalite period. And as he digs into the case deeper, he finds out about the love triangle, infidelity, and betrayal.

If you want to know how the mystery was solved, you can watch it on Hoichoi!

The movie has tried to include the essence of comedy, horror, and romance. The actor-turned-director Anirban Bhattacharya has made an effort to portray the Macbeth of Shakespeare in the very famous comic fairy drama of Badal Sircar.

The story of the film revolves around Ballabhpur Rajbari, which only has two men left alive, the last of the Ray family, and Manohar, his inherited slacker. Since there is no sign of wealth other than this ruin, the “Dynasty” only exists. Both of the residents are heavily indebted. They receive a proposal to sell off their property one day.

Now, you have to watch the movie to see what will happen next!

Once again Hoichoi is back with a female-centric series. Here the series shows the sensitive problem of sexual violence is weaved by the director Aditi Roy.

The storyline involves a female professor played by Sandipta Sen who fights for her student played by Ditipriya Roy, who becomes a victim of gang rape when she was returning home from her friend’s birthday party.

You have to watch the series to know whether the victim seeks justice for the crime she has faced!

After the huge success of Murder in the Hills, the director Anjan Dutta is again back with another mystery. The Hoichoi series is interesting and features a cast that includes Anjan Dutta, Arjun Chakrabarty, Ananya Chatterjee, Sujan Mukhopadhyay, Trina Saha, and others too.

The storyline starts when renowned crime author Arpita Sen (Ananya Chatterjee) travels to Puri with her husband, Raja Sen, she was raised in Puri; even now, childhood trauma still plagues her. When she becomes embroiled in a murder investigation, she learns that some old images are somehow connected to the crime. Another murder happens in the interim. Arpita is surrounded by folks that are quite suspicious.

To see how the thrilling mystery was solved you have to watch the series!