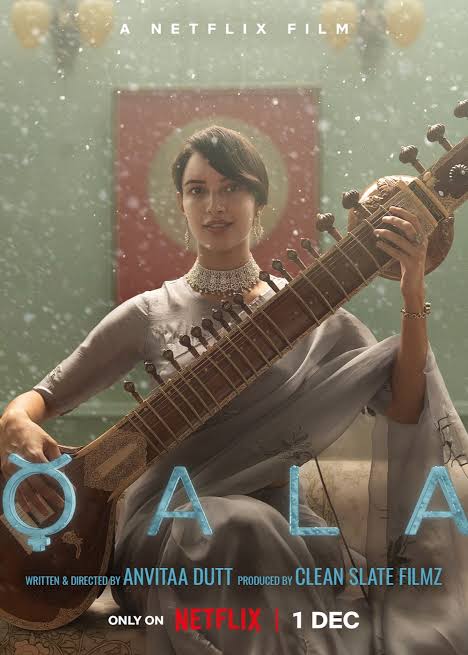 Known for her enchanting creations Director Anvita Dutt is back again with another masterpiece,’ Qala’ a musical film, set in the 1930s.The film brings with it the poignant melody of the golden era of Indian cinema, the music scape of which has been created by Amit Trivedi, who has succeeded remarkably in amalgamating the nuances of Indian classical music with the then-retro style of the 30s…writes Dr.Priyaankaa Mathur.

The trailer launch itself brought a hue representing the film’s rich ambiance, while the cast reflected the taste of the bygone era with the choice of their costumes. The film stars Tripti Dimrii, Swastika Mukherjee as her mother, Amit Sial, and Tasveer Kamil, while it marks the acting debut of Babil Khan, son of the legendary actor Imran Khan.

The trailer unveiled a canvas that is like a painting in motion, capturing Tripti Dimrii as Qala the lead protagonist who’s an aspiring Musician. The film represents Qala’s spiral journey from childhood to attaining the peak of her career, while she dwindles between her tragic past confronting her mother undergoing a psychological roller coaster.

The highlight of the film is certainly its enchanting music by Amit Trivedi, who created the entire album for Qala. The most interesting thing about the album is how Anvita captured a different feel of every song, while the lyrics were woven by the master lyricists Kausar Munir and Swanand Kirkire, to give each song its characteristic identity and a different feel according to the narration of the film.

Talking about her second venture with Cleanslate Filmz and Netflix Anvita said,” It was a wonderful experience working on Qala, with this brilliant team. Qala is an emotional journey into the world of a musician, and her relationship with her mother which unfolds itself as she grows towards fame. The trailer just captures a glimpse of her journey, as to how she deals with the pressures of fame and competition, and what it can do to you, which is very relatable. We look forward to how the audience would immerse themselves into the musical world of Qala.”

Anvita throws light on an interesting trivia as to how the collaboration with Amit Trivedi happened for Qala, she said, ” It was infact way back in 2013 when I was writing the film and I asked Amit to give music for this film which has many songs, whenever I will make it. So when the time came, I approached him and he agreed to do it instantly.

She adds, “Infact Amit does not create an album, he tells stories through his music. Music being an inherent part to this film, he created the music for the entire world of Qala. He just followed how she thinks, and how she behaves and just created a music scape around her. While his music has familiar orchestration and sound of that era, but it has fresh songs and feel.”

Talking about his inspiration and the process that went behind creating the required mood and the music scape for the film composer Amit Trivedi said, “My inspiration comes from the filmmakers themselves. So, we all traveled to Goa together to compose the album. It was on the very first day when Anvita narrated the film, the story, and how she gradually took me to the world of Qala, which was so beautiful and unique. Anvita has a voice of her own, which is very original and sounds non-existent. Infact I slept over it that night and it kind of played in my mind.”

He further adds, “Initially it was a little challenging since I had to study the sound of that era. I had to get into that era and the real characters, who were both musicians, to do the entire background score and music scape. So,I started thinking how composers of that era like Salil Chaudhary Saheb, S D Burman and OP Nayyar would react to it after the narration and deal with it. So we tried to record the entire soundscape as it was done in that era.

Elaborating on the recording he further adds, “We recorded the entire sessions live and followed the same process, just the way the recordings happened way back in the 1940s. There were at least 10-12 musicians playing together, along with the singers in the same room recording together. Eventually the full album was done in the next 4 days.”

While the trailer certainly brought the glimpse of a melody inspired by O P Nayar Saheb, with its characteristic beats, and orchestration, which still resounds in my ears from the song ‘Koi Kaise Mujhe Samjhaye’, the film has created quite an anticipation and stir already. The film is indeed a musical extravaganza all set to enchant the audiences, who can watch the film on Netflix to be released worldwide on December 1, 2022.