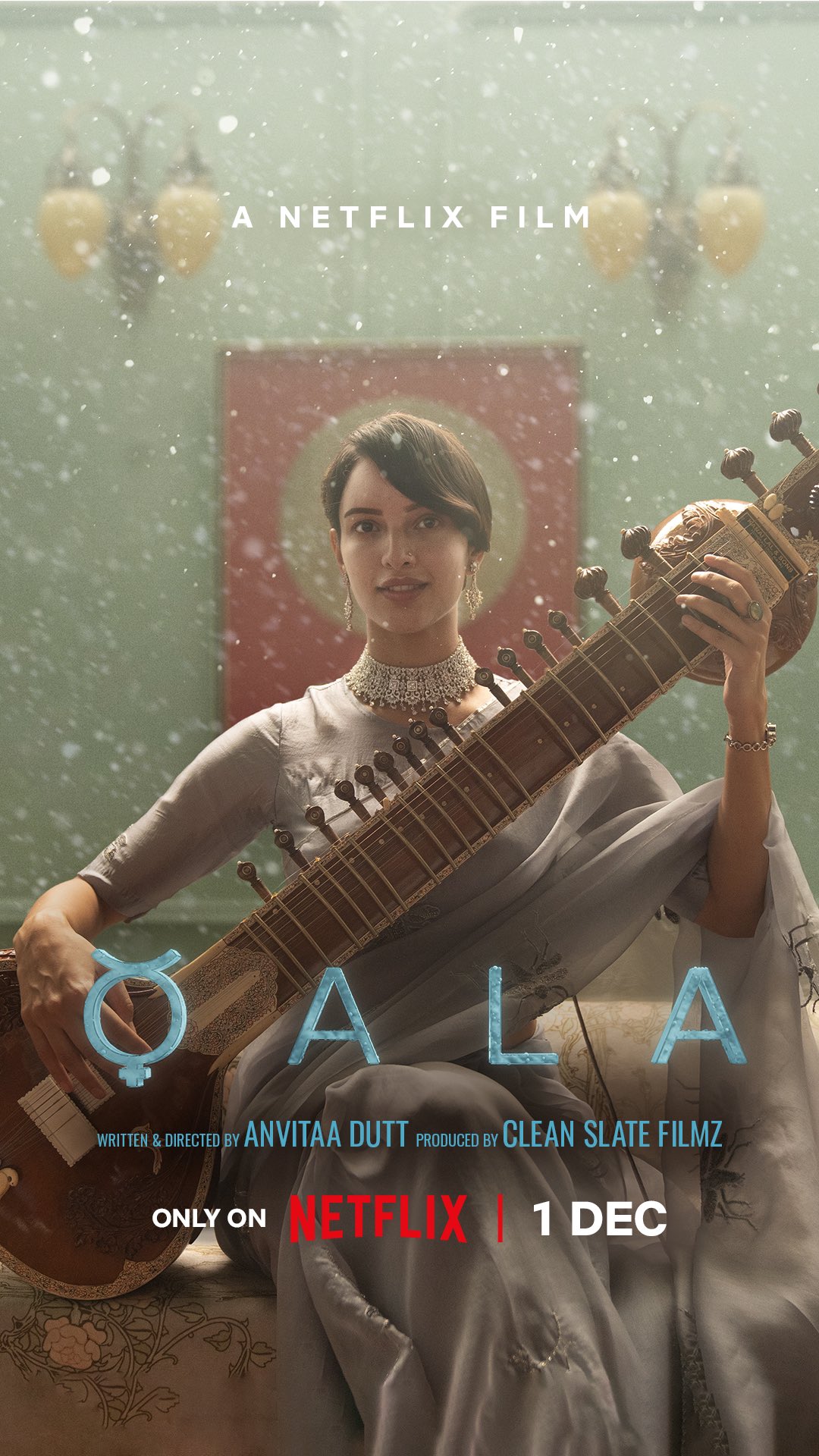 ‘Qala’ is a Magic on Celluloid Portraying the Dark Side of the Classical Music World!

Film ‘Qala’ is a poignant story of a young aspiring singer who faces gender prejudice from the point of her birth.Life takes its turns for her unknowingly, but she is left to bear a never-ending hatred from her mother, who’s under the dominance of patriarchal influences in traditional Indian Classical Music Gharanas (families).Those being the days when even strong women would further oppress their daughters, who could easily defy it…writes Dr. Priyaankaa Mathur.

This musical masterpiece well depicts the tallem (teaching) aspect of traditional gharans of Indian music to which the protagonist Qala (Triptii Dimri) belonged. The story allows you to introspect on what is the responsibility of an ideal guru. Is it to teach a student gently, or mercilessly, even when the student is willing to learn the art but, is stuck at some point.

The film captures the era of 1930s and 40s when the revered male classical musicians were addressed as the Pandits, and the females as Bais,and were yet given the due respect to be called Vidushi’s as in the present day. Qala’s mother Urmila (Swastika Mukherjee), who’s a yester year thumri singer,did not want her daughter to be called a Bai, untill she is exceptional to be called a pandit.Thus, she refuses to show any faith in Qala’s musical capabilities and chooses to abandon her.

Bound to have a male representative of her musical legacy Urmila adopted an orphan Jagan (Babil Khan) to be the heir of her musical tradition, as the future pandit. While, Jagan is truly a musician who sings for himself and did not have any intentions to use Urmila as launching pad. Urmila is even willing to compromise her dignity to get Jagan to sing in the films in Calcutta, which was then a hub of film music composers. Her character sadly displays a lack of integrity both as a guru and as a mother.

The film is indeed a work of art for those in love with human psychology, which showcases various layers of toxic parenting, and tarnished relationships, which results in oppressed child psychology.The cuckoo-like singer ‘Qala’ eventually is caught between the struggle of skill and ambition, reality, and expectations. She ends up becoming a pseudo-strong personality, which appears strong from the outside but is internally shattered. She secretly learns the art of compromising from her mother aiming to rise high to achieve her goals at any cost.

Qala just craves for love and validation to be heard and seen by one’s mother and the music industry. She wants to achieve everything, her mother’s appreciation, awards, fame, and glory, which her mother wanted to bestow upon her adopted brother Jagan.The story is very relevant to any era, which shows how due to lack of parental guidance and affection, children can feel insecure, and jealous, while they can end up taking some drastic steps, which can never be reversed.

The film depicts many dark aspects of the Indian classical music world, which seems to be inspired by real-life incidents or legends of musicians,who destroyed another’s voice out of jealousy, by either poisoning them or even imparting a wrong vocal technique. Unfortunately, this act of resentment not only damages an artist’s voice, but one’s soul,as he’s just left with a body, without breath, as Jagan says,while you can actually feel his pain.

Although, Qala learns to win in life by compromising the right way, the noise of her soul did not leave her. The film brings many sad moments breaking you down into tears, while you feel Qala’s pain and anguish despite her success, while she is unable to share it with her mother, leading to an uneventful climax.

When we look at the Cinematography by Siddharth Diwan, the film ‘Qala’ can be described as a magical experience, or a poem in celluloid.Each frame be it the grand sets or the snowy outdoors, looks like a painting well composed by Director Anvitaa Dutt, who yet again created a masterpiece after Bulbul.

The lead actors Triptii Dimri and Swastika Mukherjee have shone brilliantly as performers. Triptii is the soul of Qala and captures the character’s vulnerabilities very sensitively. She is capable of moving the audiences to tears,while she pleads to her mother for help, but gets no reply. Swaskita Mukherjee has played the hard hearted, a strong-headed stoic character well. While you can relate to the pain of Jagan having lost his voice, enacted by Babil Khan, who’s indeed succeeded to create a mark as a debutant.

Music by Amit Trivedi takes you to the bygone era of the 1930s and 40s, where the soundscape seems to be inspired by the legendary master composers of that era. The song ‘Shauq’ seems to be inspired by S D Burman Saheb, while Trivedi has meticulously composed the drunk in love lyrics by Swadand Kirkire, using a combination of folk instruments and earthy voices of Swanand kirkire, Shahid Mallaya, well complimented by Shireesha Bhagavatula. The serene melody is indeed a treat to watch, while it bestows a pictorial canvas, with a lantern-lit boat traveling through still waters, with a relatable soundscape inspired by ‘O Manjhi Re’ and ‘Dil to Kare pukar’ reminiscing Devanand Saheb.

The songs’ Rubaiyaan’ and ‘Ghode pe Sawaar’ take you to the golden O.P Nayyar era with his peculiar beats and instrumentation. It is to note that while the music of the film sounds familiar, each composition is original and haunting, while the film outshines with a seamless blend of background score created by Sagar Desai. Soulful lyrics by a team of master lyricists Amitabh Bhattacharya, Swanand Kirkire, Kausar Munir, Varun Grover, and the director Anvitaa Dutt herself are fresh yet haunting.

The film seems flawless and is a must watch for all art and music connoisseurs, not to miss this masterpiece which bestows the very stillness (thehrav) and delicacy (Nazakat) in every dialogue with an excellent art direction with an eye to every detail. Except at one point, when a subtitle mentions the sound of a Sitar as ‘Tanpura plays’ which reflects the ignorance of the filmmakers on not knowing Indian musical instruments and sounds enough, or it could be just a post-edit error!