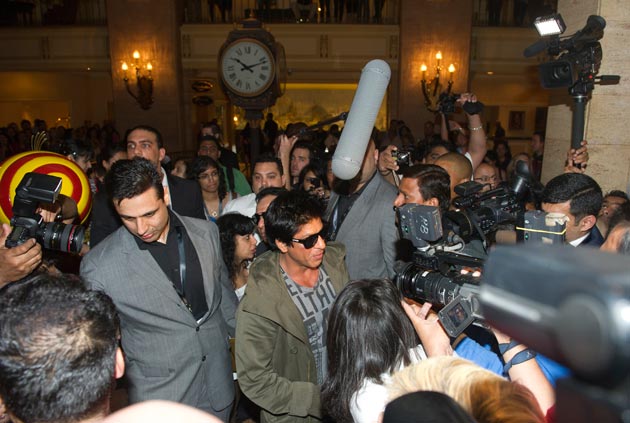 Superstar Shah Rukh Khan is truly Bollywood’s badhshah and his welcome at Toronto’s Fairmont Royal York hotel was proof enough!As around a hundred fans, who waited to catch a glimpse of the actor at the hotel lobby on Friday morning, the actor broke into an impromptu little jig despite his knee injury – turning his entry into a mini red carpet walk!
Looking dapper in a casual jacket, jeans and sunglasses, the actor arrived at the hotel amid much cheer, applause, and shout outs from girls who went “SRK, come here, SRK come here”.

Ever since the IIFA kickstarted, fans have been awaiting Shah Rukh’s arrival, and they didn’t want to miss it for anything.
Natasha Khalfan, a crazy SRK fan took off from work, and reached the hotel at 8 a.m. even when she knew he won’t arrive before 10 a.m.
“I have taken day off just to see Shah Rukh. I have been following him on Twitter, and he has been writing about his flight and his injury. Whoever wanted to miss the chance of seeing him! Oh my god…I just saw SRK!,” an over-excited Khalfan said.
“I even said ‘I love you’ to him, and can you imagine…he looked at me, and smiled back. Oh my god! It’s the most precious moment of my life,” said the recently married Khalfan, who tells that her husband proposed to her Kuch Kuch Hota Hai style.
Gujarati girl Viral Paun was another fan, who had been awaiting Shah Rukh’s visit, and says she didn’t sleep at all the last night because she feared missing Shah Rukh’s arrival.
There were other young girls – Riya Oommen and Shikha Jagwani from Mississauga, who felt “luckiest” to reach the hotel at the same time as Shah Rukh even when they didn’t know about his flight timings.
“What a perfect timing!” The die-hard Dilwale Dulhania Le Jayenge fans screamed excitedly, and added, “This is the closest as it could get! We were just in time to see him. He is the most talented actor!”

Even the security personnel had a hard time managing the crowds.
“Many actors have come ever since the IIFA kickstarted. But managing Shah Rukh Khan has been the hardest!” said a hotel official.
Shah Rukh has returned to IIFA after six years, and he will be performing at the IIFA awards night after seven years.