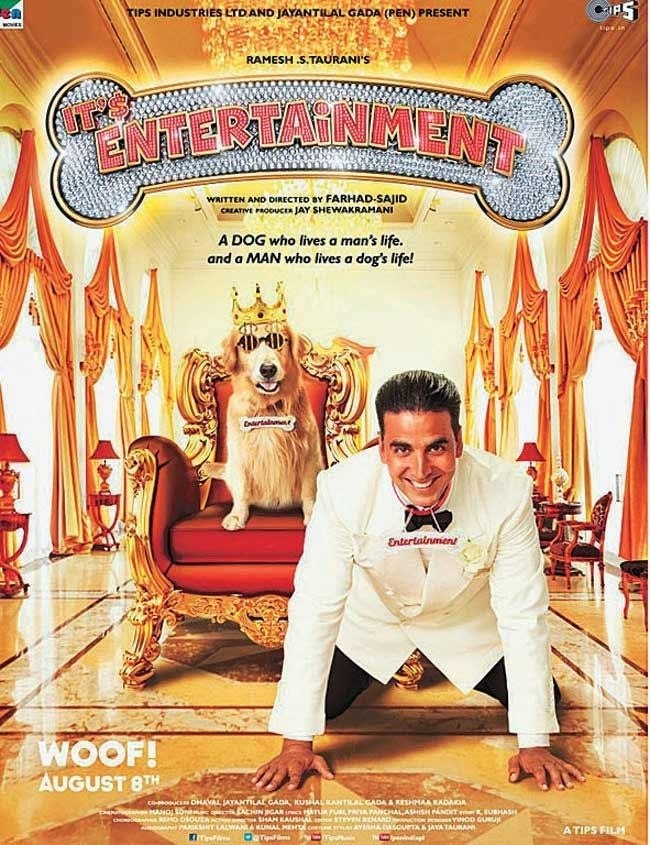 Sajid-Farhad, the writer duo of movies like Chennai Express and Singham Returns fame, have donned on the director cap with their new movie Entertainment. History is witness to the downfall of comedy in Hindi cinemas, with mere few examples of surviving shiny stars in the 21st Century. Neither dialogues nor drama or direction has succeeded to reviving the age old memorable slapstick comedies like Andaaz Apna Apna and Jaane Bhi Do Yaaron. Sajid-Farhad have written the screenplay for several movies in Bollywood, all of which have turned out to be mindless comedies (you cannot live through them till you kill your brain and bury it in the deep seas) and strangely enough highly grossing as well.

So, as I made my way to the movie theatre, with my mind very much in place, I expected nothing short of two and a half hours of loud-raucous comic efforts on which I would merely smirk generously and let it pass. However, I was in for a surprise and a pleasant one at that too. Entertainment, though may not find a place on the ‘Bollywood’s Wall of Fame’, it certainly brings with it some hope for the dying genre of comedy.

Akhil (Akshay Kumar) a struggling odd-jobs man, accidentally finds out that the man he cared for as his father, is not his biological parent and that he is the son of a Bangkok based multi-millionaire Manohar Lal Johri. Only there is slight problem. In his dying will, Akhil’s father writes off his entire 300 crore business in the name of his beloved son-like-dog ‘Entertainment’ (Junior)under the guardianship of Johnny Lever as the caretaker cum lawyer. What ensues is a comic ride, where Akhil and his sidekick Jugnoo (Krishna Abhishek), together take on the dog and fail miserably in their every attempt. On the other hand, Akhil’s lady love Sakshi’s (Tamannaah Bhatia) father (Mithun Chakraborty) will not consent to their marriage till Akhil becomes a crorepati. Somewhere in between the struggle to win his lady love and scheming to get rid of the dog, Akhil is saved by Entertainment from a life threatening accident, turning these bitter foes into fast friends. To spice up the story, enter Prakash Raj and Sonu Sood as villain brothers who have their wicked eyes on Entertainment’s property. The rest of the movie is a laughter ride, adding finishing touches with action and emotional drama.

Here are four reasons why I will recommend you this movie; a) Every character has its well justified space in the movie, b) With very few misses, the comedy is fairly bone tickling, c) The plotline has no missing pieces and will not leave you lost or confused and d) The character of Entertainment is thoughtfully sketched and his adorable puppy faces will make your heart melt. So this makes me wonder, why other plotlines written by the same duo (Sajid-Farhad) failed so very miserably to create an impact. Here’s why- they did not direct those movies.
Hopefully, with this new directorial venture, we can look forward to a few good movies.

This is a movie that you can watch with your whole family and drum your fingers to some peppy songs. Children will especially enjoy this movie and fall in love with the antics of the new ‘Dog Star’. Entertainment promises you good three hours and not an ounce of regret for the penny spent!