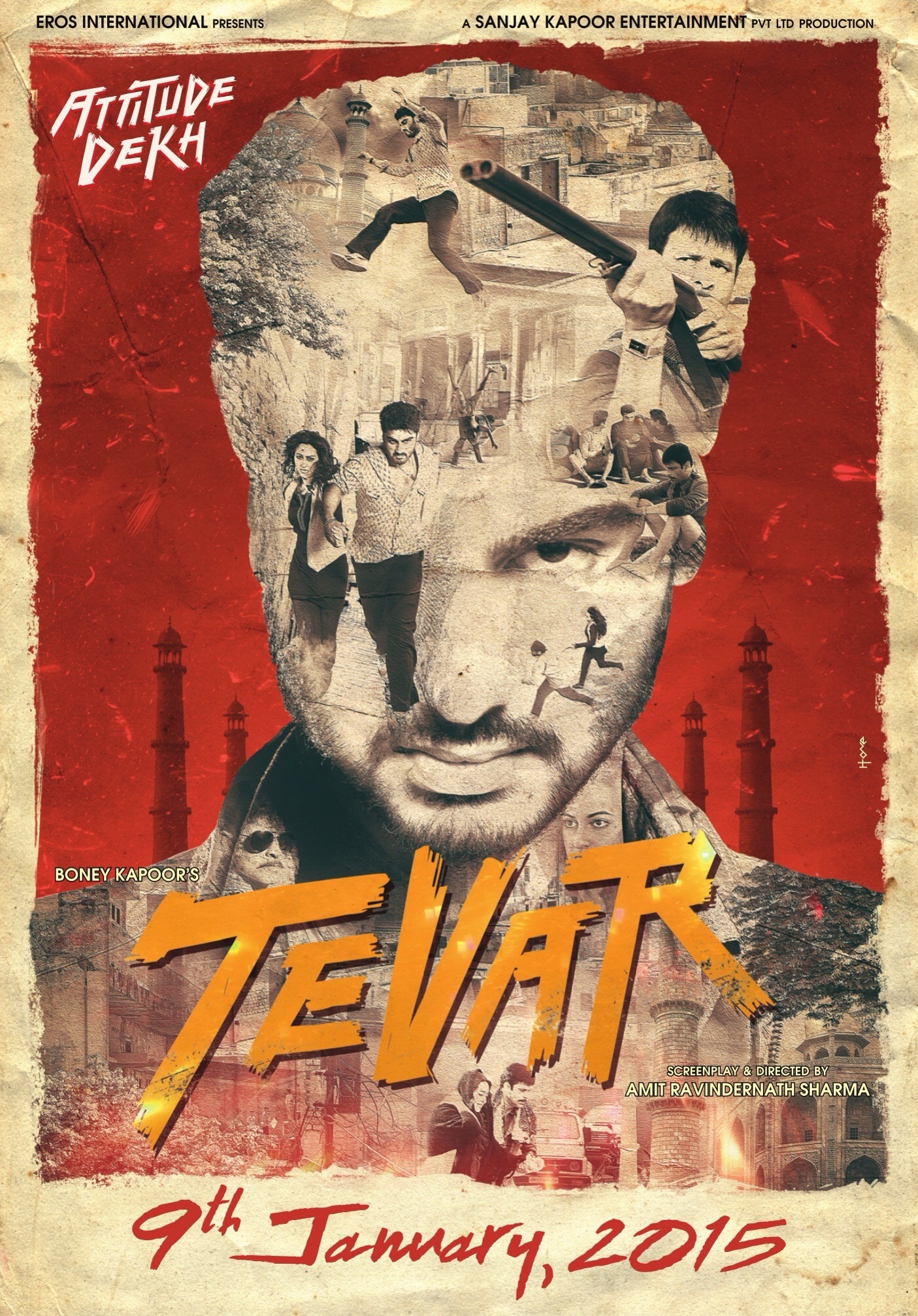 I had a very boring week starting from my last review of Take it easy and I was itching to watch some masala Bollywood drama. Now, I don’t how you define drama, but for me it’s the right sprinkling of action, romance and suspense. Tevar’s trailers showed just that, but then you know antagonistic relationship with trailer ( haathi ke daant khaane ke aur, dikhaane ke aur types). Well, a remake of the Telugu blockbuster Okkadu,Tevar, left me with mixed feelings. I liked (still not loved) bits of it, badly wanted to ignore several bits, laughed out loud quite a bit but more at my company whose hearty laughter could be heard distinctly in the otherwise quiet hall.

Pintoo (Arjun Kapoor), a self professed Superman, is a star Kabbadi player of Agra. Bahu Bali Gajendra Singh (Manoj Bajpai), whose elder brother is into politics, is a big time gunda of Mathura. He falls hard for Radhika (Sonakshi Sinha) but radhika rejects his proposal for marriage. Gajendra Singh turns into a vengeful jilted lover who wants to ‘possess’ Radhika at any cost. Pintoo gets tangled in this mess somehow, and three hours later (yes, three very very long hours) Bam!! you have your predictable end.
Now, as I said, I have mixed feeling about the movie, let me list down the likes and dislikes.

The following are the things that I liked about the movie, a) Manoj Bajpai is one of the most committed and fantastic actors I have seen so far. He not only embraces the soul of the character but lives it out without letting it turn down the cliché road even for a second. His comic timing is brilliant and he delivers the right punches with just about the right blow; b) The actress who played the role of Arjun Kapoor’s sister. Bubbly, funny, dramatic, she is a treat to watch on screen and it’s a pity that she wasn’t doled out more screen space; c) All the characters were given a decent screen space and were able to justify their presence in the movie and e) the song ‘Joganiya’ composed by the duo Sajid-Wajid, lyrics by Kausar Munir and sung by Shruti Haasan is brilliant and kept playing in my head all day long.

The things I absolutely did not like about the movie are a) Arjun Kapoor jumps off roofs and fights off heaviliy built goons without getting even a scratch on his body but when it comes to fighting the puny little Manoj Bajpai, he ends up getting beaten black and blue (what man!); b) Who in their right mind would make Shruti Haasan do an item song. It was like watching a cute little puppy wag its tail to the beat of Munni Badnam hui, it’s not saucy, it’s just plain silly and c) The broad storyline is same old repeated, beaten and killed one. Though the twist towards the end is unexpected, it still does not make up for the three hour long predictability.

If you are a fan of action movies, then most probably you will like this movie as well. Otherwise, be sure of what you are getting into.
My verdict: **