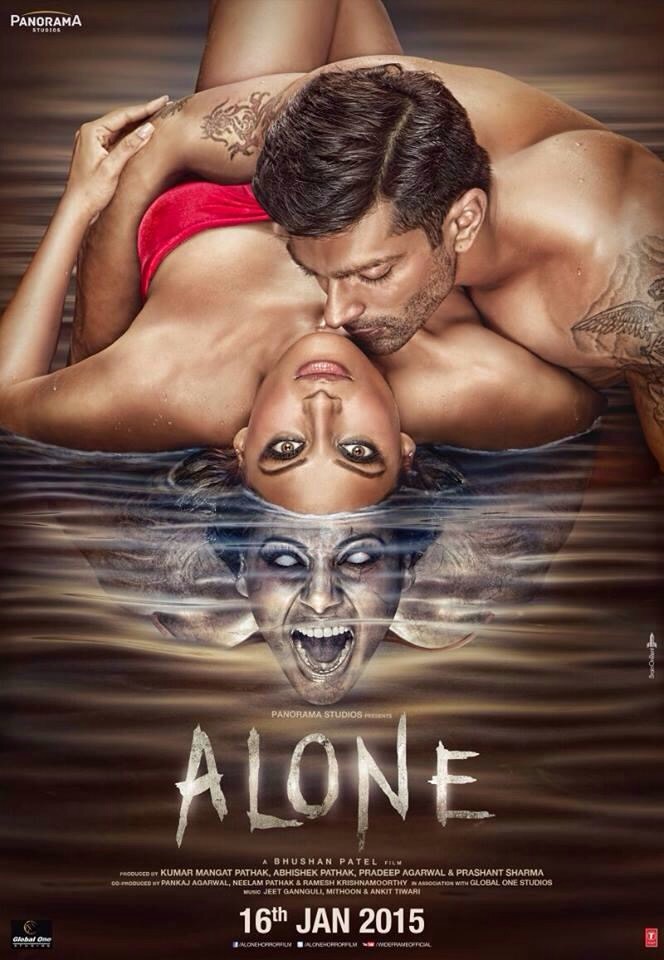 Movie: Alone
Director: Bhushan Patel
Cast: Bipasha Basu, Karana Singh Grover, Zakir Hussain
Genre: Horror
I am the last person you will find in line to buy a ticket to a horror film. You don’t need a horror movie to scare the daylights out of me, just stand behind the door and surprise me, that should do the job. Now that doesn’t mean I do not watch horror movies. I watch them on the televion, in bright daylight, with all the tubelights switched on and the volume pushed down to a mute. So, when I was asked to review Alone (an adaptation of a Thai movie by the same name), I frightfully swallowed a lump in my throat and assured myself, how bad can it be? After all Bollywod is not really known for making well crafted horror movies. And as it turns out to be, I am not that scared either.

Sanjana (Bipasha Basu) is haunted by the guilt around the death of her sister Anjana (Bipasha Basu again!). They were Siamese twins but were separated in their youth. Kabir (Karan Singh Grover) and Sanjana go to Kerala as Sanjana’s mother meets with an accident and is hospitalised there. To look after the mother, they decide to stay in town, in the house where Sanjana and Anjana grew up. Soon Sanjana begins to sense the presence of her sister which Kabir rubbishes as hallucinations. Sanjana is taken for therapy to a psychologist (Zakir Hussain), but will Sanjana ever get over the death of her sister? Or will the Anjana come back to seek revenge?

What makes a horror movie scary is often not the brilliance of the actors, but its rather the technical effects and the background score. In Alone the only thing scaring me was the background shor. There were neither brilliant technical effects nor a freakish background score, rather the sound was amplified to the extent that even a phone ringing hurt my ears. Bipasha Basu’s acting has not changed much over her previous horror roles, and that reminds me, has she signed some lifetime contract of horror movies? Just wondering!! Karan Singh Grover’s acting is decent enough only there is nothing much to act out. Anyone with even the slightest trace of common-sense can predict the story within the first half. Also what is it with these ghosts making noises only at night? Are they nocturnal like owls?! Again, just wondering!!

The ghost in the movie, whose ghoulish presence is barely there, is caked in greyish powder. Now, that’s an old trick in the book and is no longer ghost-ish enough. Come on now, what’s the point of a ghost who could not even give me goose bumps. Also, the biggest faux pass in the movie is when the ghost turns into an angel- aarrgghh… I was practically pulling out my hair and you can see my bald spots. Now that’s scarier than the movie.
Horror freaks will not enjoy the movie so I will not recommend it to you. For others who don’t mind an occasional scare (because there are only a few scary occasions in the movie), Alone can be a decent time-pass. Though I would suggest, don’t watch Alone, alone. It would be undoubtedly more fun with a company to laugh with if not get scared.