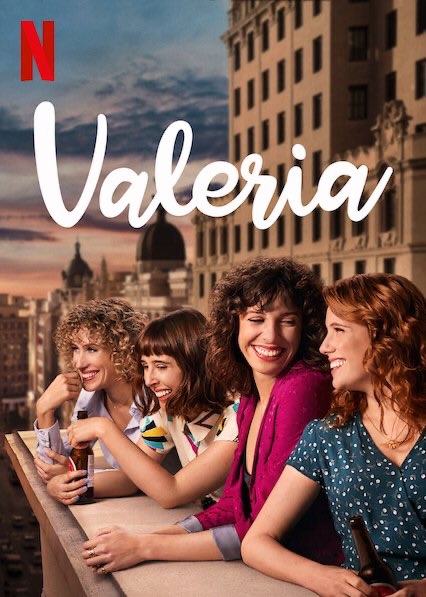 The show aired its first season in May 2020 and was in the Top 10 on Netflix for months. The show gives you a very relatable element of choosing between adulting and spontaneity which makes you a binge-watcher. Although the show is compared to HBO’s Sex and the City, I beg to differ. This show has a lot to cater to the audience, from problems in a marriage to problems at work because you like your co-worker to being a closeted gay woman and to being in a benefits situation with a married man, this show is legit a package.

When you see so much drama in their lives I bet you will forget the drama happening in your life which makes it a good escape show especially at night when you might do a lot of thinking. The show is set in such a beautiful place in Madrid, Spain that you just get hooked to the feeling of it. It’s like New York was the USP of Sex and the City, Madrid is the same for Valeria.

The first season ended with a couple of loose ties that were just begging for a second season so Netflix released its Season 2 in August 2021. Like any good, sexy and romance-comedy show, this also has a love triangle. The only twist here is that two of the people in the triangle are married.
Valeria is stuck between her husband, Adri who is pushing her away from her writing and is also pressing her last nerve of passionate marriage while on the other hand, she has this hot mysterious friend, Victor who encourages her to write and also keeps her on toes all the time. This doesn’t really look like a confusing choice but the way she takes all of this with sweet memories flashes from her past with her husband and the flames of her soul with this new friend, Victor it becomes the toughest choice for her possible.

In addition to the adventures of Valeria, her girlfriends are no less when it comes to drama. Carmen, Lola and Nerea themselves have a rollercoaster life with everything almost upside down. Carmen had a crush on a co-worker but was too scared to do/say anything, Nerea was a closeted gay woman who was not happy working for her parents who were very judgemental and Lola started falling for a married man who was with her only for the benefits and she knew about it. With everything being so chaotic all we really wanted was Val to write that book, The Impostor.

The end of this rollercoaster ride leaves us hanging by a thin thread. The two choices now that Val has to make are legit life-altering and scary at the same time. Will Valeria end up in a passionless marriage with Adri or will she go to Victor and follow her passion? And Will she stand her ground and look for a new publisher or publish her novel under a pen name because she wants the money?

Val being the main lead awakes these questions in our mind on the other side, Will Lola continue seeing Sergio? Will Carmen and Borja survive if he switches his job? And will Nerea’s friendship with her old gals remain the same after her discovery and self-exploration of the queer community?

With all that being said, I’m pretty sure you get the gist of what this show is all about. It is nothing like Sex and the City, it is nothing like anything actually, it’s just like Valeria.

One thought on “Valeria: A Tale of Friendship, Sex and Adulthood”