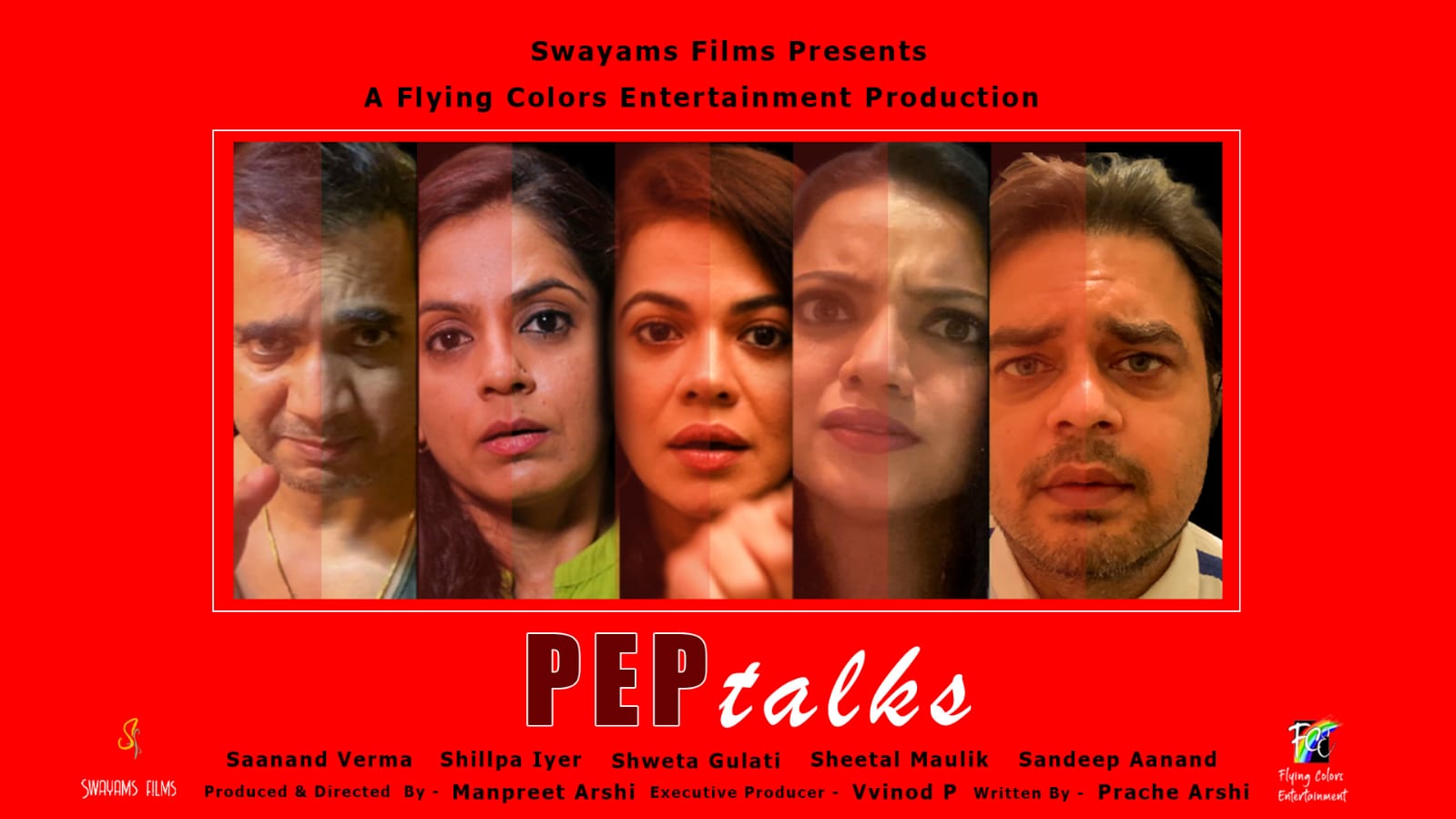 Pep Talks is about five conversations that inspire you to be your hero in a time of crisis. The short film gives insights on various issues of the day to day life, which we tend to deal with anxiety and negativity, feeling distressed and confused. The film takes you on an inward journey in those dark moments when we feel extremely alone and sometimes tend to speak to ourselves, while we don’t share our innermost feelings from the fear of being judged. Pep Talks is that one moment of positive thought with self that just changes the narrative.

The film begins with a young social media addict played by Shweta Gulati who is feeling low, and complains how the social media has addicted the society, that even a single negative comment, disturbs the peace of mind.

Saanand Verma portrayed as Sharmaji in his characteristic comic style portrays the irony of a family man who is distressed with a load of financial responsibilities, while he is out of a job due to lockdown in the ongoing pandemic. He is worried about how will he manage the expenses without a job.

Sheetal Maulik plays a desperate woman in romance who is always nagging her lover.She feels unhappy with her relationship, which has turned toxic with her obsessive behaviour, while she holds her head in absolute distress.

Shillpa Iyer plays the typical compulsive mother who’s talking about how difficult it is for her to feed her children.She feels angry and wonders how to deal with the kids in the smartphone era.

Sandeep Aanand asserts how miserable becomes the path of choosing the truth because of which he loses his job. He gets agitated thinking how many others who have coped with the system, have sustained in the same job for many years,climbing the corporate ladder.

Writer Prache Arshi talks about the  concept of Pep Talks and choosing the characters for the film, she says, ” I have been observing people from the last year since the time Covid 19 pandemic  started. I felt that people were superficially happy, but internally they were going through some kind of a turmoil and fighting their own battles. Although we live together in a family or the same building still we don’t open up our hearts to anyone and that’s the trigger point of the story. I concluded that we all need to heal ourselves from within and that can only be possible when we become our own heroes,to win each battle of our lives.”

She adds,” In any situation, there are many negative thoughts which hound you, and at that point of time a Pep Talk with self, acts like a magic wand, as that one positive thought just changes the narrative. Although there were many topics and characters, I thought of choosing those which are most relevant and connectable at this point especially during the pandemic. While deciding on the characters I found every age group has its struggles, especially social media which has amplified things so much that, it’s difficult to bifurcate which information is for you and which is not. The key message from the film is that life keeps changing, and a situation today shall too pass, as nothing is constant since winter always turns into spring!”

The film brings different perspectives after that one moment of self-reflection which changed the entire perspective to deal a situation, giving solutions to all the problems. While a mother of today needs to give time to self-grooming, the family man who has all the stress and responsibilities can playfully handle it with little humour and destressing by doing yoga. While someone who believes in the truth should stay steadfast with it as he is unique and would be certainly rewarded for one’s integrity and character. Those who are too engrossed with social media should spare time and energy to do something lucrative to expect genuine appreciation.