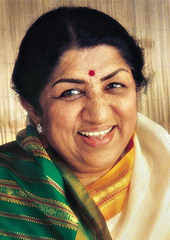 She is the Queen of Melody, who’s known by many titles including the Nightingale of India, the Voice of the nation, Voice of the Millennium for her utterly emotive sweet sonorous voice, which has given life to every song she has rendered for the Indian Cinema. The soul of the Indian cinema, the living legend Lata Mangeshkarji turned 92 this week. Filmi files take you to the journey of this Diva who’s rightly addressed as the Goddess of music, inspiring many generations of playback singers in India.

Lata Mangeshkarji has ruled the hearts of her music lovers for over seven decades. She has recorded over fifty thousand Hindi film songs in thirty-six regional Indian languages and foreign languages, though primarily in Marathi and Hindi. Bestowed upon by the highest civilian award the Bharat Ratna in 2001 by the Government of India, which she truly deserves, Lataji is the jewel of India and a prized possession for every Indian.

Born on 28th September 1929,as Hema Mangeshkar, her name was later changed to Lata by her father Pandit Deenanath Mangeshkar and mother Shevanti. Her father was a Marathi-Konkani classical music teacher and a theatre actor who taught music to all of his five children lata, Meena, Asha, Usha, and Hridaynath Mangeshkar. It’s interesting to know that her father adopted the surname Mangeshkar to identify his family lineage with his native town of Mangeshi in Goa, which eventually created a unique identity for the family over the years.

At the tender age of 5, her father introduced young Lata to work as a child artist in his Marathi Musical plays, who passed away at an early age. After the early demise of her father, all the responsibilities of the family came on her shoulders, she being the eldest amongst all her siblings. At the early age of 13 years in 1942, teenaged Lata began her career in films with acting and singing. The owner of Navayuga Chitrapat company Master Vinayak offered his help to the family and gave her her first song ‘Naachu Ya Gade, Khelu Saari Mani Haus Bhaari” but unfortunately, the song was removed in the final cut of the film.

Her initial journey was not a bed of roses, as her shrill high pitched voice was not accepted easily by the filmmakers. Her voice was compared with the voice of the great singer Noorjahan, who was the then reigning queen of Indian cinema. But, Young Lata never succumbed to any criticism and made her way to the top with sheer determination and belief in her talent. She took every opportunity which came her way and thus sang her first Hindi song “Mata Ek Sapoot Ki Duniya Badal Le Tu” for a Marathi film Gajaabhaau.

In 1946 she sang the song ‘Paa Lagoon Kar Jori’ for  Vasant Joglekar’s Hindi film Aap Ki Seva Mein. After two years of singing this song, she got her first big break from the composer Gulam Haider to sing the song  ‘Dil Mera Toda’ in the film Majboor, which was immensely appreciated. The song marked the beginning of her new era with no looking back. Thereafter she received all the love and adoration being lovingly addressed as Lata Didi by the film industry professionals. Lataji once said in an interview that she pays high regard to the music composer Gulam Haider whom she truly calls her Godfather in the film industry, for recognizing her talent giving her the first big break of her career.

In the year 1976, she was listed as the most recorded artist in the history by the Guinness Book of Records, to have sung  over 25000 solo, duet, and chorus songs in over 20 languages in between the four decades from 1948 – 1974. Since then and to date Lataji has sung over 50000 songs giving many hits.

Her serene voice music has enthralled one and all irrespective of one’s age, be it the romantic songs to sad melancholic melodies from the black and white era of the 50s hits like Aayega Aanewaala from Mahal, Yeh Zindagi Usi Ki Hai from Anarkali, Mohe panchayat pe from Mughal-E-Azam to when the cinema became colored in 60s. Her songs like Chalte Chalte from Pakeezah, Lag Jaa gale from Woh Kaun Thi, O Sajana Barkha Bahaar Ayi from Parakh, Raina Beeti Jaaye from Amar Prem, Ehsaan Tera Hoga from Junglee, Ae Mere Watan Ke Logon which became huge hits in the 70s.

While her crooning melodies like Ae Dil e Nadan from Razia Sultan, Satyam Shivam Sundaram, Woh Chup Rahe To from Jahan Ara, Nainon Mein Badra from Mera Saya to Dekha ek Khwab from Silsila marked her classic romantic songs of the 80s.In the 90s she conquered the heart of the love striken youth with her songs in the Yash Chopra blockbusters from Dil to Pagal hai, Dilwale Dulhaniya le Jayenge, Mohabatein, Kabhi Khushi Kabhi Kushi Kabhi Gham, Suraj Barjatiya’s family dramas Hum Aapke Hain Kaun, Maine Pyar kiya and songs of Veer Zara in the 20th century.Lataji is the unmatched reigning queen of the last seven decades and continues to enthrall her music lovers till date.

Most deservingly for her contribution to the Indian cinema, she has received many prestigious awards and honors. She is the recipient of India’s highest award in cinema, the Dadasaheb Phalke Award by the Government of India in 1989. She has received three National Film Awards, fifteen Bengal Film Journalist’s Association Awards, four Filmfare Best Female Playback Awards, two Filmfare Special Awards, Filmfare Lifetime Achievement Awards to name a few.

Her illustrious journey doesn’t only end on singing, she also happens to be a music composer, having given music for many films. She has also produced and given music direction for Marathi and Hindi Films. She won the Award for the best song ‘Airanichya Deva Tula ‘and the Award for the Best Music Director for the film ‘Sadhi Manase’ by the Maharashtra State Government.

Lataji is the pride of India who has been  recognized and rewarded globally. She happens to be the first Indian to perform at the Royal Albert Hall, London in 1974. The Government of France conferred on her its highest civilian award, the Officer of the  Legion of Honour in 2007, which marks her global popularity.