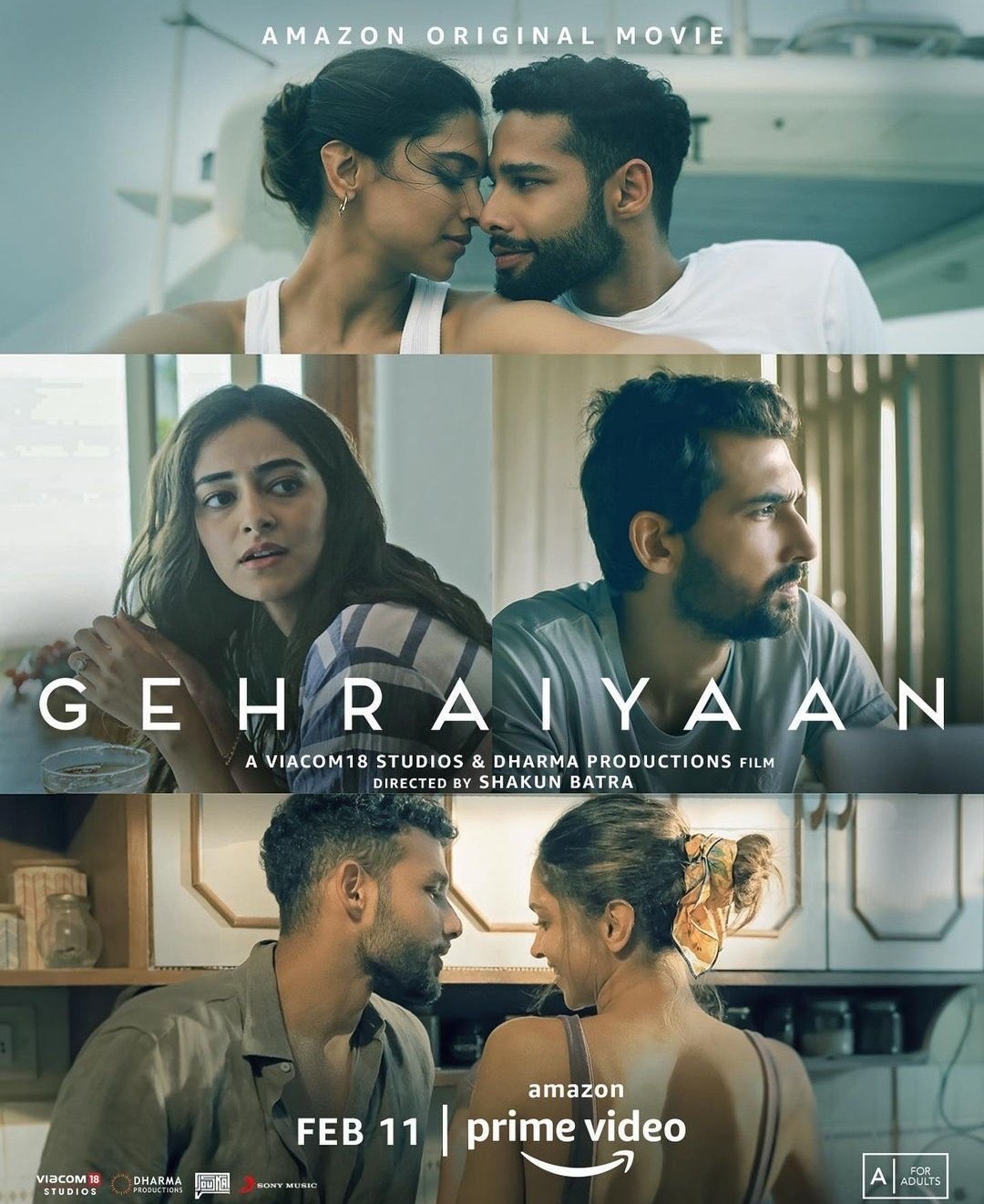 One yacht, four good looking people, their sob stories, a love triangle (that goes nowhere), and the so-called ‘gehraiyaan’.

Shakun Batra’s Gehraiyaan is supposed to be the coming-of-age romantic drama, featuring characters that have more to say than the story itself, and capture the emotional side of modern-day relationships such as live-in relationships, fancy pastimes, unrestrained passion, luxurious getaways, bohemian living, incessant use of F-words in everyday conversation and much more.

But does it come anywhere near to portraying deeper humane emotions and nature as perhaps hinted by its title? Let us analyse…

The movie kick-starts on a promising note as we meet the ravishing yet painfully sombre Alisha (Deepika Padukone) as a vulnerable Yoga instructor with a back story of family discord and personal tragedy. No wonder, like her six-year-long boyfriend Karan (Dhairya Karwa) pokes fun at her ever-whining nature, we find her feeling sorry about herself in more than one scene. Alisha and Karan decide to catch up with Alisha’s cousin Tia (Ananya Panday) and her fiancé Zain at their fancy Alibaug vacay home. But before that, they meet at Zain’s yacht. Alisha and Karan, who are already running tight on budget, get instantly awestruck by their expensive yacht. Zain and Alisha meet for the first time at this very yacht, and this is also the spot where they meet for the last time. What happens in between is a series of dramatic events that show the vulnerabilities of human emotions, intricacies of modern-day relationships, power of money and of course, lust. The palpable attraction between Alisha and Tia’s fiancé is visible right from the moment they lock their eyes for the first time.

The characters are not happy in their respective personal lives and are constantly looking for ways to find love. However, the movie takes a new turn when Alisha, who is bored with Karan’s lack of attention and a lull career, finds herself wooed by Zain’s charms and flirtations. Eventually, Alisha’s loneliness forces her to succumb in the arms of her cousin’s lover. In the beginning, it seems like Zain has it all. With great looks, a sex-appeal, and truckload of money through massive corporate investment, he is willing to fund Alisha’s Yoga mobile app project. What follows next is a series of lies, infidelity, and some promiscuity. Out of nowhere, Karan makes a marriage proposal to Alisha, and thus begins a new saga of love, romance and tragedy. Like most relationship dramas, Gehraiyaan too has tragedies and breakups. However, mind you, Deepika Padukone as Alisha ain’t the Meera of Love Aaj Kal who accepts breakup in a chirpy mood. Alisha doesn’t take this break-up easily and spirals into an abyss of trauma.

It is difficult to decipher the motive of this movie or what exactly the film attempts to do. With four people in love, this is neither your ‘Vicky Cristina Barcelona’, nor American romantic drama ‘Closer’ that portrays the life and love stories of a few messed up people with a solid screenplay. Gehraiyaan at best, only happens to be a clutter of handsome faces that come together and then go their own ways, and are fond of breaking engagements and indulging in verbal diarrhoea.

While infidelity and marital discord are some of its key topics of introspection, this doesn’t make Gehraiyaan an interesting watch for the larger audience. What further bothers us is the lack of seriousness in its execution. While the lead cast triestheir best to rise above their performances, they fail to leave a good final impression.  Naseeruddin Shah as Alisha’s father comes into the picture only at a later stage and doesn’t have much to offer. Story-wise, while we see deep family secrets getting unravelled towards the end of the movie, Al, as Tia calls Alisha, decides to ‘take to grave’ the only secret that matters the most in the story, and puts a lid on it. So, where exactly we, as viewers, are supposed to dig deep in its remarkably shallow plot?

With a narrative that is going nowhere and a screenplay that fails to catch up, Gehraiyaan seems like a missed opportunity. It is not as coming-of-age as expected, nor does it come anywhere close to capturing the emotional upheavals of troubled souls. So what’s left of Gehraiyaan after two and half hours of drag is a dull, incoherent hotchpotch of characters and their not-so-perfect lives.

Finally, Shakun Batra’s third feature film entailing the nitty-gritty of all things that make a romantic drama— Gehraaiyan isn’t what it is supposed to be. It does not even capture the subtle nuances of intimacy with the depth that it claims, and fails to tell us what is going on in its long screenplay blotched with unpleasant plot twists and unlovable characters.

If there’s anything good to watch or feel in this movie, it is the perpetual sea view shots, Tia’s (Ananya Panday) Alibaug vacation home and some fine cinematography every here and there. Everything else lacks profundity. And as far as the story is concerned, it is neither deep nor impactful.

One thought on “Movie Review: ‘Gehraiyaan’”