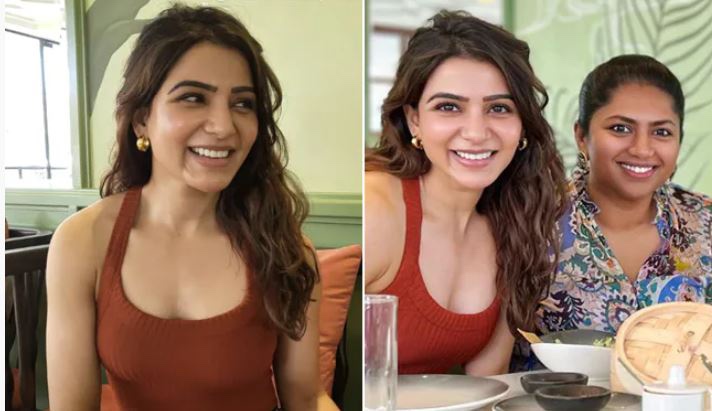 There was a time when bodysuits were voguish and you will be glad to hear that the fashion has finally returned once again. Bodysuits can easily turn a dull outfit into something stylish. And, Samantha Ruth Prabhu was spotted donning a chic bodysuit that she paired with trendy denims as she was seen enjoying her girls day out. Samantha also flaunted her stunning new hairdo during her lunch date.

Samantha went for a cosy lunch date with her gang of girlfriends and took to her Instagram to share pictures of the outing. The gorgeous actress spent some fun time with actor VaralaxmiSarathkumar and Neerajaa Kona. Samantha opted for minimal jewellery.

Alia Bhatt and RanbirKapoor have been dating for some time now and rumours of their marriage keep surfacing on the internet every now and then. However, the couple did not reveal any thing and preferred to stay mum about it. Meanwhile, Alia recently spoke about her marriage with Ranbir and her statement left many in splits. The Highway actress was recently asked during a candid chat with Film Companion and she responded with the statement, “Whoever is spreading these rumours, it has become like the boy who cried wolf. They are crying wolf so often that actually when I am supposedly getting married, people will think it’s a rumour and it will be great for me because no one will know.”

Ranveer Singh is clearly smitten with the performance of DeepikaPadukone in the recently released film Gehraiyaan. It proves Deepika’s statement correct when she said that her Husband Ranveer Singh is her biggest cheerleader. Ranveer is apparently blown away by the Padmavat’s actress work in the film. He shared a picture in which he was seen kissing Deepikaand captioned it as “Doobey… haandoobey…ekdoojemeinyahaan”. Ranveer found Deepika’swork in Gehraiyaan as superlative, sublime, and an absolute masterclass. See the picture below:

Rakulpreet knows very well how to look superhot in any outfit. The sultry actress took to her social media account and shared a picture of her in red bikini in Instagram story. Rakul’s toned body can be seen in the picture as she has managed to raise the temperature high. It appears that the actress has posted pictures from a photoshoot and we can’t wait to see more of the actress. Rakul opted to leave her hair open for the picture and donned strappy heels.