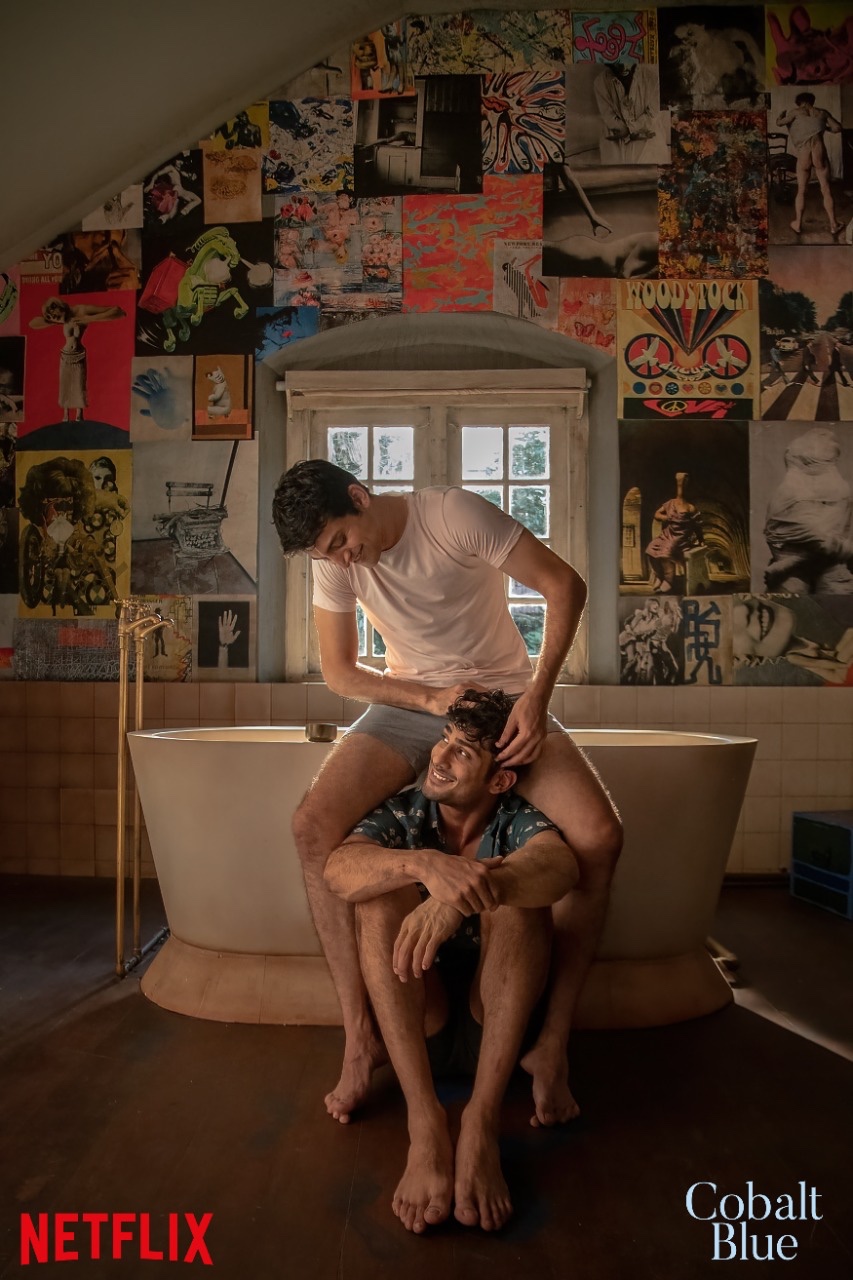 Cobalt blue, the color, represents a silent revolution. While lighter than the navy blue, this shade of blue is essentially loud, inspiring and bold. Just like the color, characters in Cobalt Blue, the movie, are symbolic of free-spirited souls who are trapped in an orthodox society marred by uncertainties and painful treacheries. And then when we discover that there is a gay love story in the backdrop, suddenly, we understand the real meaning of blue in the movie—blue represents ‘freedom’.  Many prominent love stories are named with blue in the title such as- ‘The Blue Lagoon’, ‘Blue Velvet’, ‘Blue is the Warmest Color’—all epitomizing strong, sensual love stories.

This is also a complicated love story; there is an unconventional love triangle that unfolds later on. Blue Cobalt is the story of tragedy, love and heartbreak. This is also a story haunted by an uncanny lust between its protagonists. And when the love and the lust merge, the result is a near masterpiece that is laced with the energy of cobalt blue.

Cobalt Blue is a coming-of-age saga of two youngsters who are rebels in their own ways—one (the brother) is a budding writer who wants his own room and other (the sister) who defies old-age customs of patriarchy and masculinity. Faced with the dogmas of a society set in the mid 1990s India, they both have one common tragedy—they fall for the same man. And sadly enough, they are both left heart-broken when their lover leaves them alone in the midst of the night.

The story is set in a modern India during the 1990s, where sexual explorations are a hush-hush business, and people still don’t know how to ‘use deodorants’. The characters showcase simplicity that’s rare in today’s time, and are challenged by societal expectations. The movie is an adaptation of 2013 fictional drama novel by SachinKundalkar.

Opening parts of the movie are not very convincing and appear dull. But as the story unfolds scene by scene; we immerse in the colors of the film and start falling in love with these obnoxious yet relatable characters. The movie opens up with a grieving family. And from the start on, we are entangled with these deep emotions of the family, but what seems odd is the way in which death is interpreted differently by different individuals in the same household.

Sexual underpinnings are subtly showcased in the movie—almost like an art. College-going Tanay (Neelay Mehendale) is an intellectual who immediately thinks about occupying the top most room of their home after the death of a family member. Opportunist much? Well, he is only trying to get some adulthood privacy. Right from the beginning of the film, there are hints that the protagonist might not be our ordinary man who falls for the next attractive girl in the class. He instead, gets strangely aroused by unknown men’s glances and touches. He also has a crush on his college professor (Neil Bhoopalam). The sexual energies are palpable; however, not as strongly as when Tanay is face to face with their new handsome tenant played by Prateik Babba. In the first sight itself, Tanay seems to be intoxicated by the new tenant’s sexualized looks. There’s some unusual, unspoken attraction between the two. Remember this is 1990s—homosexuality was something not very approved of in the times. Despite all odds, Tanay feels dangerously attracted towards the new tenant.

When the two lead men interact, indulge in a ‘bromance’, we are reminded of 2017 blockbuster ‘Call Me by Your Name’- that had a similar vibe to it. The attraction and sexual tension between Tanay and his new tenant becomes apparent the moment he smiles coyly, after their first sexual encounter. There is a magnificent glow in Tanay’s eyes that speak volumes about the fact that he is already in love. Neelay Mehendale performs at par here, where he has perfectly portrayed the character of a young gay man who is in love and is sensuously seduced by a total stranger.

Tanay’s sister Anuja (Anjali Sivaraman), might seem like a tomboy—but when she also falls for the same tenant, her feminine side takes over. Again, a fine performance by Sivaraman. While the mystery tenant at first seems to be wooed by Tanay’s boyish charms, he easily chooses to abandon him one night. But he not only leaves Tanay disheartened, he leaves Anuja equally devastated. What follows is the duo’s common experience of heartbreak.

The music is moody and atmospheric—complementing the artsy screenplay every now and then. And the lyrical Hindi poems hit the nail on its head. Just like in CMBYN, we see a rustic mélange of three distinct languages—Marathi, English and Hindi in Cobalt Blue spoken by most of its characters.

Director Sachin Kundalkar has certainly tried the best he can to make the story look surreal and enigmatic. And the momentary magic that happens on-screen is certainly enough to leave you pining, almost like the protagonist in the film, for a final, comforting closure. But we see none. The mystery man disappears at the same rate as he appears in these two characters’ lives. We can understand the hundred emotions that would have crossed Tanay’s mind the moment he realizes that his love is gone.

And then there is Anuja, who has her own issues and is faced with unsaid emotions at the end of this movie.

There are so much unspoken and untouched aspects in this movie—but then that’s what makes Cobalt Blue stand out among the rest of its competitors. While many gender-sensitive movies have released in the recent past, Cobalt Blue looks the most promising one and strikes a chord for its warmth and relatable themes.

First of all, Cobalt Blue is a queer movie. Secondly, it is also a great love story in general. While love is such an overused word in today’s cinema, daring and volatile are the two words that best describe this wonderful drama. There are scenes that will either leave you revolted or deeply touched—that is entirely upon how you look at things. If you chose to watch it, you won’t regret it. If you leave it, you’ll miss out on a rare movie that will certainly leave you tickled by its gentle strokes of a powerfully imaginative love triangle.