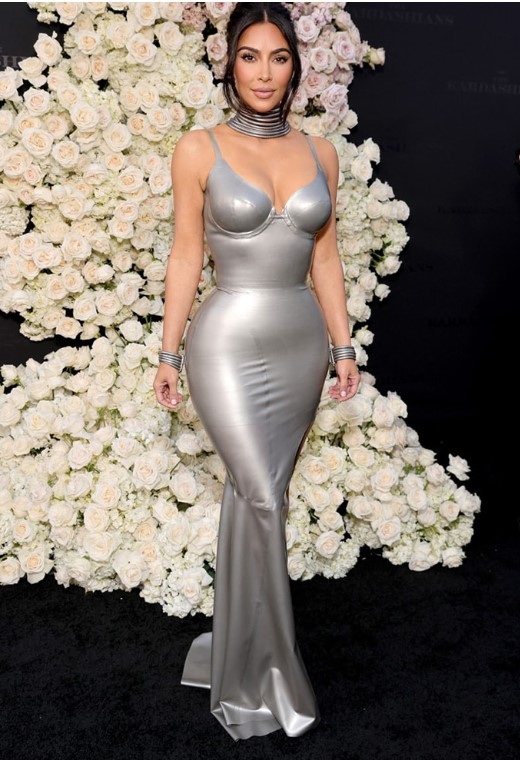 American media personality and business woman Kim Kardashian’s sartorial choice has left her fans in awe of her. She knows how to grab eyeballs with her fashion choices. Recently, the socialite was spotted walking down the red carpet of her latest show. She was seen donning a silvery-grey gown with a plunging neckline. Kim paired her outfit with matching slate grey choker, earrings, and bracelet. Kardashians always remain in the news for some reason or the other and their fashion choices remain one of the top reasons. Kim made her entry and exit with Pete Davidson. See the pictures below:

Janhvi Kapoor recently spotted in a stunning powder-blue jumpsuit for her dinner date. The “Gunjan Saxena: The KargilGirl” paired the strappy halterneck jumpsuit with a chic pair of heels and a sling handbag. She left her tresses open and posed for the shutterbugs happily. Janhvi helped her fans beat their midweek blues with her latest appearance. Her dressing sense has managed to impress the young girls and gave an outfit inspofor a midweek escape.

Why Ranbir Kapoor is living in Goregaon before his wedding with Alia Bhatt?

Ranbir Kapoor is currently living in Goregaon before his wedding with girlfriend Alia in the mid of April. According to reports, the “Rockstar” actor is currently busy completing his prior work commitments. He is busy shooting for Luv Ranjan’s untitled film and this is the reason why he has shifted his base. According to a report in Pinkvilla, Ranbir is living in Hotel Westin for the last two days. Meanwhile, Neetu Kapoor was asked recently about the tentative dates of the couple’s wedding and she quipped “Shadi Ho Gayi”. Ranbir will begin the shoot for Sandeep Reddy Vanga’s film, Animal, starring RashmikaMandanna. Ranbir will begin the shoot from April 21 in scenic Manali, revealed sources. Reports also claim that Ranbir and Alia will also delay their honeymoon plans in order to meetprior work commitments.

Malaika makes a statement for the first time after accident

Malaika Arora was recently in the news after she met with an accident in Mumbai. Malaika’s car met with an accident on April 2 following which she was immediately rushed to a nearby hospital. Reports stated that she had sustained minor injuries in the accident. The actress is currently recovering at her residence where her rumoured boyfriend Arjun Kapoor and other friends paid her a visit. Now she has penned a note of gratitude for her fans. The actress took to her Instagram account and shared an image. She wrote that the last few days were quite unbelievable. See the post below: