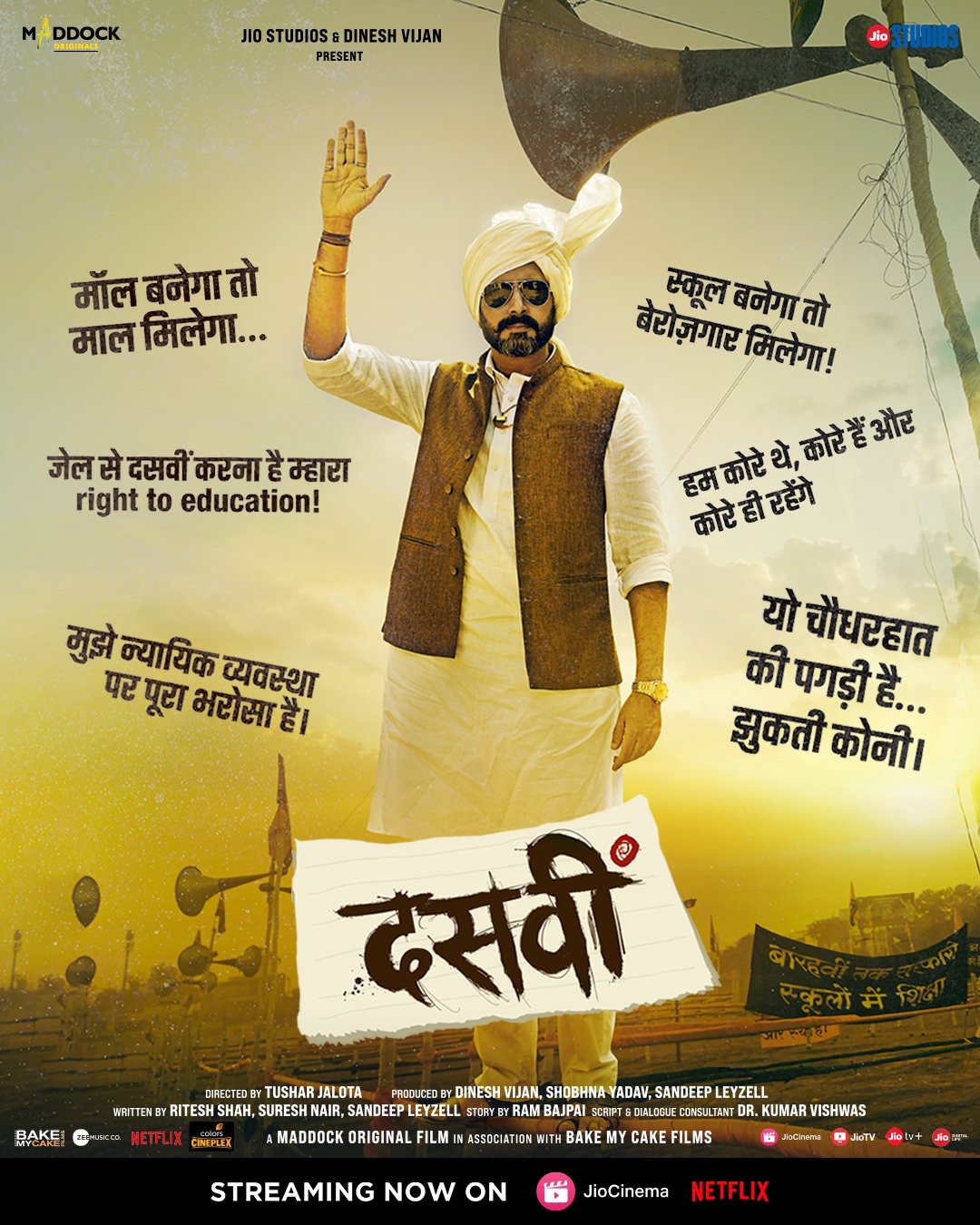 Abhishek Bachchan’s latest flick on a politician’s thought-provoking journey towards self-awakening—Dasvi, is a subtle mix of three themes. They are portrayed through some borrowed quotes in the movie that are used as connecting links between its plots.

First—‘Those who cannot learn from history are doomed to repeat it’, next, ‘Power tends to corrupt, and absolute power corrupts absolutely’, and third—‘The tiger cannot change its stripes’.

Dasvi, directed by Tushar Jalota begins with a desi Haryanvi politician Ganga Ram Chaudhary (Abhishek Bachchan ). He is a typical modern-day politician. Accused of a teacher recruitment scam, he is preparing for his stint in the jail. On his first day, an arrogant Ganga Ram refuses to bow down his head to enter through the small gate of the jail. He carries an ego that’s even bigger than his neatly done huge pagri. The moment he enters into the jail, he gets a VIP treatment. You would have heard of important people being offered bed tea when they wake up. Here, Ganga Ram gets asked, ‘Toilet or bed tea?’ by a flattering jailor. Obviously, not even a spoilt toddler gets this kind of attention. But then, isn’t it what happens wheninfluential people tour the lockup?

While in the initial days he gets the royal treatment of a superstar, he soon gets rebuked when a strict jail superintendent, Jyoti Deswal (Yami Gautam), makes entry into his life. That’s when things start to take a new twist.

Back at home, his wife Bimla Devi (Nimrat Kaur) becomes the Chief Minister of Harit Pradesh—the fictional state. In what becomes a classic example of ‘absolute power corrupts absolutely’, a dim-wit Bimla who once shied away from politics (politics roti banane jaisa asam kam nahi hai), becomes engulfed by power-seeking whims after becoming the CM.

Inside the jail, Ganga Ram takes on the challenge of ‘making chairs’ as a prison duty as per the orders of SP Jyoti. The attempt is to break the ego of the man. He might be an influential politician outside, but inside the four walls of the jail, he is a common man serving jail term. That was taken care of by a righteous Jyoti Deswal. However, Ganga Ram figures out a way of escaping the prison work. Desperate to escape the orderings of Jyoti, Ganga Ram sets out to pursue his class 10 exam that is dasvi. A perfect reason to avoid the prison tasks.

Hesitant at first, Jyoti allows him to pursue his class 10thexam, with the hopes that it might bring a change of heart in him, or save his state from having him as the CM next time, as that’s what Ganga Ram had promised while making the request.

Ganga Ram, thus, sets out on a mission to study for his 10th boards. He soon starts exploring the prison library, and comes across texts and works of historians that leavehim awestruck. There he comes across the lines——‘Those who cannot learn from history are doomed to repeat it’ and gets hit by the words. He also reads about India’s freedom struggle and the hard works of celebrated revolutionaries in the likes of Subhas Chandra Bose, Bhagat Singh and Chandrasekhar Azad to name a few. Inspired, invoked, and awakened at the same time—a curious Ganga Ram leaves no stone unturned to learn Hindi, which is his weakest domain. Looking at the seriousness of Ganga Ram’s drive towards learning, Jyotihelps him cross the hurdles of learning Hindi. This wholejourney showcases the transformation that happens due to his new found love in history, social sciences, and science. The movie tries to capture the essence of education through a corrupt politician who wants to amend the mistakes of his life through education.

The movie naturally shows some good intentions and triesto deliver a noble message—about the importance of education. However, there is a lull after the first hour that drags on for a little while. The good part however, is the fact that the movie touches upon many relevant subplots such as jativaad (caste system), lust for political power, corruption in the system, and of course—importance of education. At a time when importance of education has been emphasized again and again and some states have even started making it mandatory for a minister to have a minimum educational qualification—this movie is an important reminder for the same. That doesn’t save the movie from its weaknesses though. The execution, while well-intended, ended up looking a bit clichéd in most of the scenes. While the lead performers did their parts well, we couldn’t see much from them as expected. Despite being a satire, the punch-lines lacked the impact. And the overuse of local Haryanvi accent could certainly pose as a turn off for many.

Minus these flaws, Dasvi can be watched as a fun, weekend special one-time watch. But for those looking for something extraordinarily impactful, Dasvi is surely passable. Abhishek Bachhan deserves some praise for mastering the Haryanvi tone and accent while convincingly donning that rugged look of a semi-literate minister. He also subtly articulates the innocence of a child when and where his role demanded the same. Yami Gautam hasdefinitely come out of her eye-candy image, and has more to offer as a no-nonsense police officer. Airlift fame NimratKaur, did pull off the role of an unenlightened woman quite aptly, however we could have seen more of her. While the performances were quite nice, the movie fell flat on occasions.

The movie did offer a few chuckles and brought smiles every now and then, but the storytelling lacked the flow and failed to keep the viewer engrossed for long. Despite the negatives, a one-time watch would certainly bring one close to the real issues of society. Take this movie solely for its classic satirical look at the contemporary political scenario, but for the rest, Dasvidoesn’t pack a heavy punch.