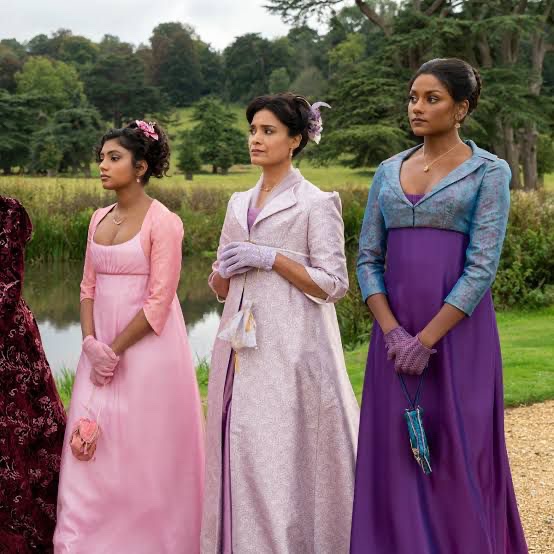 The Netflix series, Bridgerton season 2 aired in 2020 resumed with unfinished affairs of the Ton in the first season. Anthony, the eldest Bridgerton son starts his hunt for a perfect wife who could effortlessly take care of his family’s ladily duties.

Eloise braves her society debut, and Lady Danbury helps the queen choose a diamond for the season. The novelty of the series is the arrival of the Sharma sisters in the Ton hosted by Lady Danbury. While Anthony still looks for his ‘suitable’ viscountess he comes across the junior Sharma sister, the delightful Edwina Sharma, and sets his eyes on her, despite her headstrong sister Kate’s repelling attitude towards the viscount. Kate is adamant about finding a suitable groom for her sister so that her grandparents can finally accept them as family and sponsor her dowry. The regency love story takes an unexpected turn when the viscount feels an undesirable attraction towards Kate and their opposing personalities draw the audience into the charm of their chemistry.

The Sharmas are half-sisters, the elder one, Kate Sharma is the daughter of a working-class tradesman from his first wife, he falls in love with Lady Mary from the upper-class English Society. Mary’s father disapproves of the relationship because of class issues. Mary elopes with him to India and gives birth to Edwina. When the girls’ father dies, Mary continues to raise Kate as her own daughter, and Edwina benignly accepts Kate as her elder sister.

The Sharmas characterized in the series are completely different from the book, The Viscount Who Loved Me. Kate is about 20 years old whip-smart woman in the book and she is 28 years in the show. The difference in characterization of Edwina is the most noteworthy of all.

While Edwina is a blue-eyed blonde determined to live her life on her terms, her character is quite contrary to her role in the book. Sheffields are changed to Sharmas in the series because the producer felt the need for more inclusive (read South Asian or Indian to be specific) representation in the series. Their last name is Sheffield in the book and not Sharma as in the series.

The show incorporates various aspects of Indian culture like the masala chai, quartet performance of a Bollywood song, the pre-wedding Haldi ceremony, and the women oiling their hair, adding the intricacies of Indian culture to the show. There is also a fusion of cultures of Great Britain and India, which depicts the influence of English over India back in those times. According to William Dalrymple’s book White Mughals, wills from the 1780s show that almost one-third of British men in India left their possessions to Indian wives orchildren. Although, Bridgerton is not set in the same version of England that Kirkpatrick or Bennett arrived in but the real stories of these women do offer a new narrative altogether.

Bridgerton season 1 was a huge success majorly because of the steaming hot chemistry between Simon and Daphne. Although season 2 managed to recreate the sizzling hot moments from season 1, the complicated relationship between the Viscount and Kate, warranted limited chemistry, which is a disappointment for romance lovers.

You don’t find Simon, played by Rege-Jean Page, at least once in season 2, which is yet another disappointment for Simon’s hardcore fans. Of course, the heroes of season 2 are Kate and Anthony yet the fans must be compensated given the blockbuster that season 1 is and the fanbase Rege garned after season 1.

Besides the name-sake representation, there is no profound significance why Sheffields are changed to Sharmas. Except the Indian-ness, unsolicited Indian way of addressing each other, and practicing Indian rituals in a closed atmosphere among the three women themselves, don’t expect anything special or novel.

However, season 2, quite unlike season1, may not have as steamy scenes but the perfect portrayal of Anthony and Kate by Jonathan Bailey and Simone Ashley is one thing that glues you to the screen. Yet, there are other factors that kill your interest in season 2 like the hot-off-the-press news by Lady Whistletown and Eloise’s adventures. But for the love of the Bridgerton’s, Bridgerton season 2 is surely a watchable in the hopes of much more fascinating season 3.