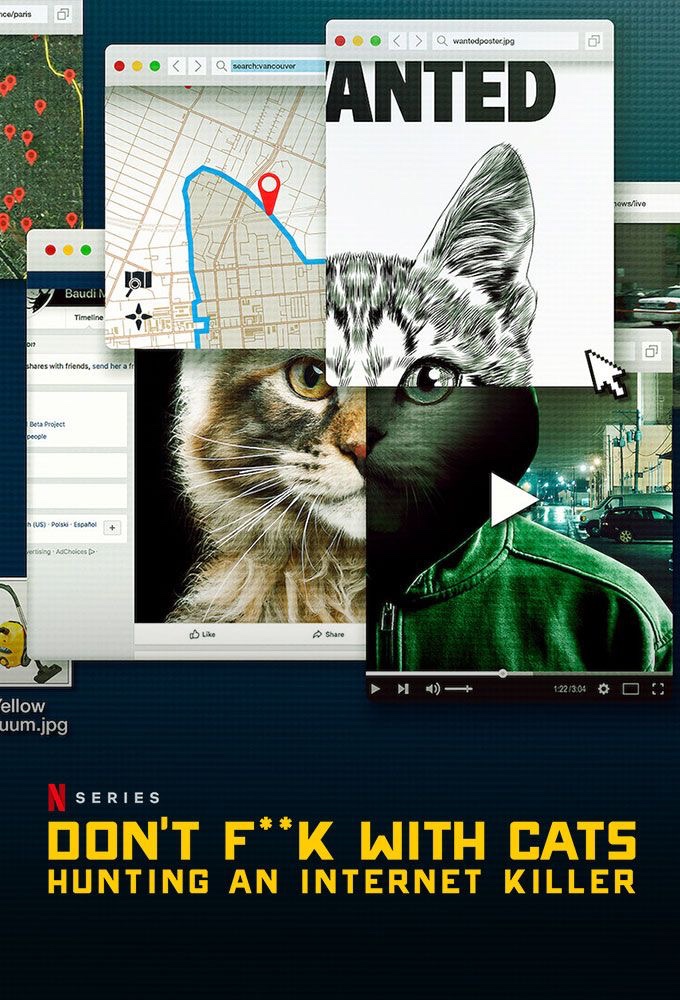 Are you a crime thriller genre fan? Brace yourself before you read further. Because we are not going to talk about the routine thrillers you see on TV. If you consider yourself a true-crime thriller fan, it is time to rethink.

We have got some spine-chilling recommendations of real-life crime story documentaries for ‘true’ crime thriller fans.

You must have realized the power of networking via social media sites like Facebook. But I’m sure none of you envisaged a scenario where many people from all countries and ethnicities work together to solve a terrifying mystery! This is precisely what happens in Don’t fuck with the cats.

Don’t Fuck With Cats is about a ruthless, crazy man who goes on a murderous rampage. He begins by posting a video of himself slaughtering two cats. And after seeing this video, some people decide to form a Facebook group to track him down and make him pay for his wrongdoings. He’s more than simply a guy who tortures animals, much to everyone’s amazement. The rest of the documentary follows these cyber vigilantes as they band together to take down the maniac.

Don’t Fuck With Cats, with a run time of fewer than 180 minutes, could be an excellent backup to watch if you don’t have anything else. Knowing about the lives of a psychopath is dark, unsettling, and intriguing.

Robert Hendy-Freegard, a conman in the United Kingdom, was in charge of many people’s lives. Women made up the majority of his victims. For years, he would separate them from their family and loved ones. Then, Robert would dupe the ladies into demanding a large sum of money from their relatives. There are three episodes, each lasting 30-50 minutes.

Through this documentary, the narrative of Robert Freegard demonstrates how easy it is for someone to manipulate another person’s life by telling convincing lies. One does not realize they are being kidnapped because they choose to save themselves from the fictitious danger Rob has created. Given that the narrative began in 1993, the creators must have had a wealth of information at their disposal. However, everything presented in those three episodes paints a vivid image of how dangerous the man was. Furthermore, it helps us comprehend Rob’s victims’ anguish and the grief that their families were/are experiencing.

The puppet Master showed how twisted some the minds are and how we should always stay vigilant, keeping those close to us aware of what’s going on in our lives. I spent hours and hours googling the whole story, and the documentary kept intriguing me even after.

We Need to Talk About Cosby

Where do you begin when discussing Bill Cosby? He was a man who transformed the television landscape in a way that redefined comedy, and he was one of the most popular entertainment characters of the twentieth century. But unfortunately, he was also a violent, vicious predator who fed his evil cravings by using his carefully crafted public image as a family man and respected community pillar.

Bill Cosby’s story must not only include both of these tragedies, but it must also acknowledge how they were intimately linked—how Cosby’s public persona and fame enabled him to perpetrate heinous acts outside of the public view.

This documentary represents how the most influential people from different fraternities hide their inner demons with a smile. This true-crime documentary includes various interviews and testimony of people who were victims and even remotely knew Cosby at his natural best.

Trust No One: The Hunt for the Crypto King

The documentary Trust No One depicts the story of QuadrigaCX, a bitcoin exchange that went bankrupt unexpectedly. Quadriga’s creator, Gerald Cotten, died suddenly in India, preventing individuals from getting their money, which totalled hundreds of millions of dollars. Investors were furious, lives were devastated, and so many questions were left unanswered that a slew of bizarre Cotten hypotheses arose. Was he assassinated? Is it possible that he stole the money and staged his own death? Is he still alive, surgically transformed and living on his own private island

This is a fantastic documentary. When Trust No One gets going, it turns into a labyrinth of intrigue. It’s about cryptocurrencies, a topic that most people are still confused about. It’s about the logical investigation and detailed account checking to piece together a challenging puzzle. And it’s about the perils of internet conspiracies, as one of the panelists put it: a man hiding his identity behind a geometric fox mask.

The best part about this documentary is the length. Even though filmmakers may have considered following current trends and expanding Cotten’s story into a formless multipart series, the film was confined to a short 90 minutes. You can’t resist but be caught up in the story because it is told at such a fast speed. In a genre prone to extravagance, it is a model of economy.

American Murder: The Family Next Door

It’s a film about matrimony and the deceit of social media and a searing analysis of domestic abuse, made with care and evident skill. Christopher Watts, a Colorado citizen, pled guilty in November 2018 to killing his pregnant wife, Shanann, and their two daughters, then disposing of their corpses in an industrial oil field near their suburban house. It’s a horrible story about a seemingly perfect American family that makes prime-time news specials and true crime obsessions scary as hell.

The film’s strength stems from British filmmaker Jenny Popplewell’s choice to forego the usual elements of a televised crime documentary — datelines, a dramatic narrator, and emotive interviews — to create a narrative exclusively from archival material. Instead, Shanann’s constant social media updates, video confessionals, and text communications with her husband serve as the narrative’s main characteristics. In addition, the police body camera footage and polygraph surveillance video of Christopher’s confession collide. As a result, the picture feels frighteningly intimate while simultaneously being large enough to show the gap between a happy marriage’s online performance and the sad reality of a relationship’s crumbling.

I initially struggled to comprehend whether or not the voyeuristic appeal of such a horrible tragedy merits the watch. However, Popplewell’s video portrays the Watts case as more than a criminal case. It’s a film about marriage and the deception of social media and a searing analysis of domestic abuse, made with care and evident skill.

I Love You, Now Die

Conrad Roy, 18, hopped into his pickup parked in a Kmart parking lot in July 2014 and deliberately ingested carbon monoxide, poisoning himself and killing himself. The adolescent, who came from a small coastal village in southern Massachusetts, had just graduated from high school, been admitted to college, and acquired his captain’s license as the heir to a patrilineal tradition of professional boatmen. He was also severely depressed and had already attempted suicide. Investigators discovered thousands of text exchanges between Roy and his epistolary girlfriend after his death, in which she not only failed to seek outside help when she feared Roy was in danger but urged him to carry out his ultimate deed. She suggests, “Why don’t you just drink bleach?”

Michelle Carter was found guilty of involuntary manslaughter in 2017 for her savage haranguing (which she is at present appealing to the Supreme Court on the grounds of free speech). But whether the 17-year-old girl was ultimately responsible for her boyfriend’s death is at the heart of HBO’s gripping two-part documentary I Love You, Now Die, which uses journalistic expertise, contradictory witness testimony, absorbing courtroom video recordings, and the shocking text exchanges themselves to parse the case’s tangled legal tangle.

I Love You, Now Die is a philosophical puzzle in which you already know whodunit but don’t know why or who else could be objectively culpable. Could a person’s death be caused solely by his or her own words? Is it possible for prosecutors and defensecounsel to comprehend the nature of free will? What is the cognitive neurology behind two mentally disturbed teenagers manipulating each other using technological tools in provoking each other?

Here is a list of some of my favourite core-shaking true crime documentaries that kept me glued to the television all weekend long and inspired my inner detective to go on a hunt for the truth behind every story!! Don’t forget to include in the comments section any other eerie and bone-chilling documentaries that kept the morbidly curious soul alive inside you.