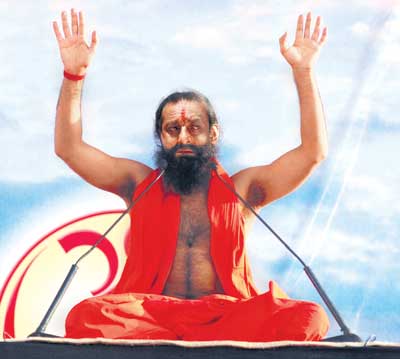 According to media reports published in Mumbai, today noted movie director Mani Shankar is planning a film on Ramdev and confirms that Sanjay Dutt will be a part of it
Popular tabloid ‘ Mid Day’ has reported that Mani Shankar, who is very close to Baba Ramdev, is so galvanised by the yoga guru’s fast-unto-death (apparently, to countermand corruption) that he has decided to make a film on him.
The movie that will also include the Saturday-night incident when his fast at the Ramlila grounds in Delhi was disrupted, will be entitled, Baba.
The director, whose the previous outing Knock Out was based on money stored away in foreign accounts by politicians and the crusade to get it back, says, “I was fired by Baba’s public stance to get back the money stashed away abroad. It inspired me to think of the story of KO. Now, I have a new script that looks at the idea of corruption and politicians from Baba Ramdev’s perspective.”
The film will feature Shankar’s favourite actor Sanjay Dutt. However, it isn’t clear if Sanju baba will play Ramdev Baba in the film or not. But, Dutt is definitely a part of the project.
“He will never say no to me. I can’t tell you at the moment what he will play in my film. This much I can say, Sanju exudes the purity to play Baba,” the filmmaker adds.
Well if the imgaes of the imagination are any indcation then Sanju baba could simply ease into Baba Ramdev’s role as duck takes to water! Filmi Files is the best place to look for latest tinsel town news.

Look here to know more in detail about John Abraham Single and Ready to Mingle!