Do you remember any Bollywood movies by their music? Well, I am sure many of you do! Music has always been a critical part of Indian Culture for ages, be it melodies or ragas, devotional music, or folk music, it’s just irresistible. Statistics show that an Indian citizen spends 21.58 hours per week on average listening to music. This fact is not surprising that you may forget the plot of the movie in a week or two. But, once the music gets stuck in your head, you cannot forget that. And, all this is possible because of our legendary musicians. So, on the occasion of World Music Day, let’s recall some of the Bollywood movies which were based on the lives of musicians, that have been widely appreciated by the audiences.

“Love makes life live”, and that life is supported by music. Aashiqui 2 was based on a love story of an established singer and a singer who is working hard to get a 2-time meal. Featuring Aditya Roy Kapur and Shraddha Kapoor, it was based on the relationship between two musicians which is quite storm-tossed and affected by issues like alcohol and temperament. This movie expounds that, when you get fame and love from people, you must respect that. This chemistry between the two was highly cherished by the audience. Aashiqui 2 has given some evergreen songs to Bollywood like “Tum Hi Ho” and “Sun Raha Haina Tu”.

It feels like the world wasn’t ready for a film like Rockstar back in 2011. According to critics the legend A R Rahman himself doesn’t know what magic will ‘Kun Faya Kun’ create. Featuring Ranbir Kapoor and Nargis Fakri, the movie is centered on the life of a singer ‘Jordan’ who aspires to become an international rockstar. When he met Heer, it was like music just came and touched his soul. Heer got married and shifted to Prague. He was thrown out of his house. Music was his target and pain, love, separation became the path for him and he touched the soul of people through that. People tried hard to pull back Jordan but he went on like a storm that is not meant to stop. “Sadda Haq” song gave voice to all the people who face any kind of discrimination and inequality. Jordan was able to cure heer with his music. She also loved him and wanted to be with him. But, Jordan and Heer were not meant to be each other in this universe. So, in the end, he was singing “Nadaan Parindey” at a concert in Verona. He visualizes Heer coming towards him and Jordan says, “Away, beyond all concepts of wrong-doing and right-doing, there is a field. I’ll meet you there”.

Four friends for whom music was a way of life. Rock On is a musical-drama movie that begins in Mumbai with a rock band ‘Magik’ formed in 1998. The four friends Aditya Shroff (Farhan Akhtar), Joe (Arjun Rampal), Rob Nancy (Luke Kenny), and KD (Purab Kohli) were the crew members of the band ‘Magik’. They got separated after a fight in between a competition organized by Channel V. Music was their reason live, they never craved for anything else except music. After getting separated from ‘Magik’ they were not living life with joy. They all were just 4 bodies without a soul. After 10 years destiny united them again and they decided to re-launch the Magik band. Music was their elixir of life. All of them reunited and performed a song written by Joe for his girlfriend Debbie 10 years back. The ‘Rock-On’ title song made a huge impact on the audience as well. The movie was a good example of how music can bring together and heal relationships.

Zeal and devotion for anything should be channelized, otherwise, it can force you to go beyond limitations. London Dreams is based on how the hunger for fame can make you destroy your loved one’s life. The story revolves around the life of ‘Mannu’ (Salman Khan) and ‘Arjun’ (Ajay Devgan). Arjun wants to become a singer and after his father’s death, he went to London to pursue his dreams. He was meant to create music and formed a music band with the help of a girl Priya (Asin). Arjun falls in love with her. But, Priya liked Mannu. When Mannu came to London, he started singing in Arjun’s concert. Arjun was dying Priya’s love and fame. The music gave him the vision but going away from him. He didn’t want anybody to come in between his fame. That hunger to listen to his name from the crowd made him destroy Mannu’s life. Still, he got nothing. Later Arjun realized that what he did was wrong. He announced in public about what he did to defame Mannu and apologized to him. They all went back to London and then became a successful music band again.

“Never try to match your dreams with reality, work hard so much that your reality matches up with your dreams”. Gully Boy is a movie loosely based on the life struggles of the original Gully Boy rappers, Naezy and Divine. A normal boy from slum Dharavi 17, became India’s rap star. The lead characters were Murad (Ranvir Singh), MC Sher (Siddhant Chaturvedi), and Safeena Firdaushi (Alia Bhatt). The story begins with the life struggles of Murad who faces family problems and poverty. At that time, he had nothing but the strength of the music. He penned down all his pain and anger into words. But he has a lifeline that is his beloved Safeen who always supports him. They had their ups and downs because of the third person, Sky (Kalki Kochelein) but love and music in the movie conquer all and Murad overcomes all the obstacles to pursue his dreams and become India’s best rapper. Few songs of Gully Boy landed like thunder in people’s hearts. A few of them were “Apna Time Ayega”, “Azadi”, “Aya Sher”. The movie came out to be a blockbuster because it was relatable and also the screenplay was perfect. 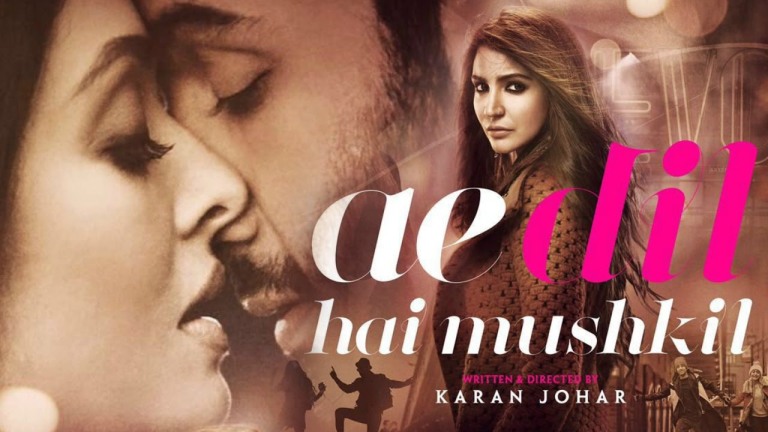 A broken heart can lead you to the sea of music. Aye Dil Hain Muskil is a film based on the life of an aspiring singer Ayaan (Ranbir Kapoor) to become a successful musician. This movie is a musical drama that depicts the story of a normal boy who sings well but fails to connect to the hearts of his listeners. In his journey to become an established singer, he met a girl Alizeh (Anushka Sharma) who taught her the real meaning of love. When Alizeh got married, Ayaan was all alone and had nothing but the strength of the music. “Aye Dil Hai Muskil”, is a song that depicts the story of each person who is not with their love. That pain of love put life to his words. And, he became a famous singer. He met Alizeh after 2 years and found that she will be dying due to cancer. Ayaan gets all the emotional flashbacks and realizes that he still loves her and decides to confess his love but Alizeh rejects him. She says friendship is bliss and love have to passion and she wants bliss and not passion. Eventually, she dies of cancer and Ayaan moves on in his life with his one-sided love. The movie is a blend of friendship and love and because of this a lot of people found the movie relatable and it became a super hit blockbuster.