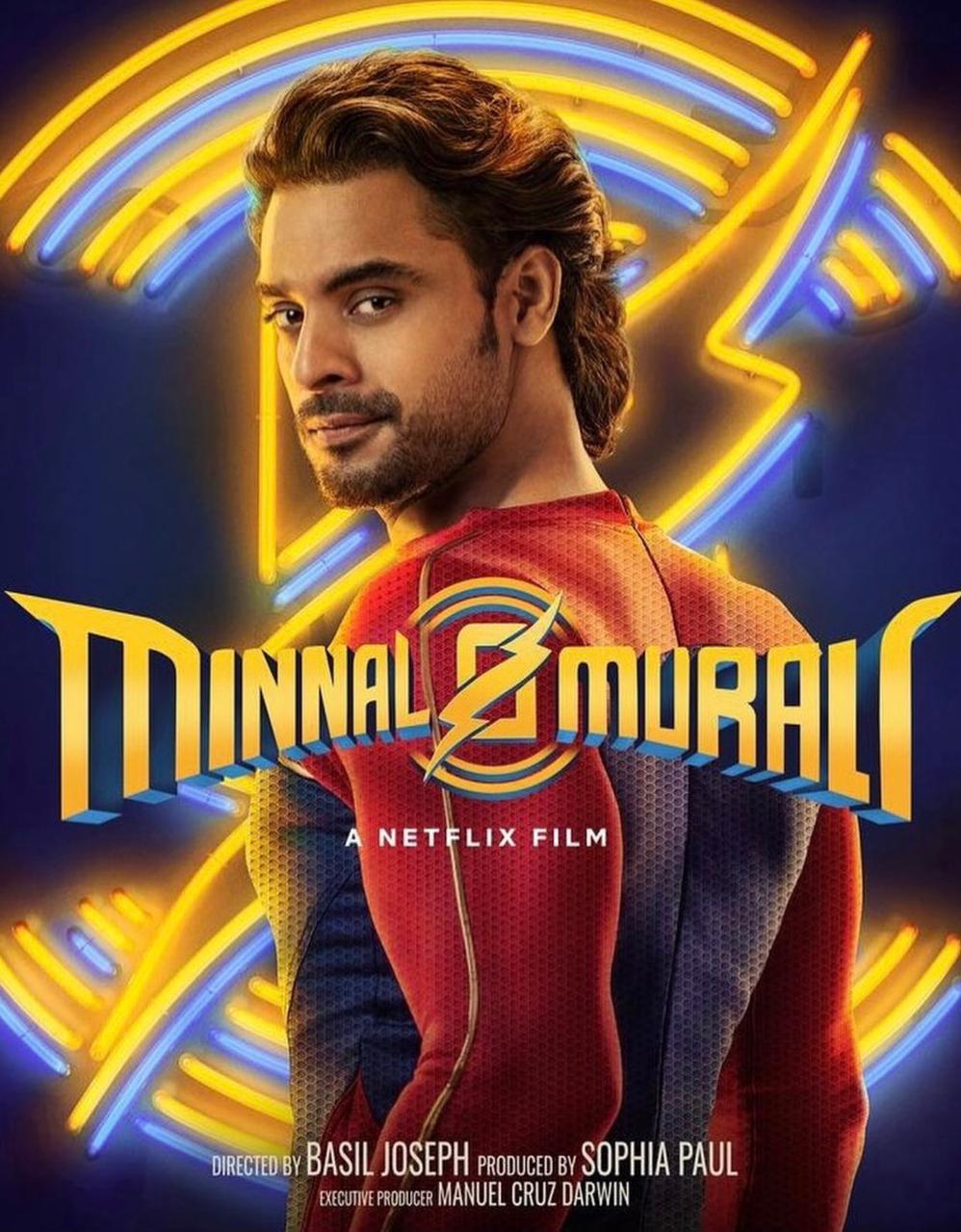 The comics, the clowns, the superheroes and their superpowers..!! The occult magic and miracles we grew up admiring.! Deep inside we always knew that they were just fantasies but believed them anyway. Right? We enjoyed the fun ride.! Superheroes motivated us to dive into the bright side by fighting all the wrongs in this world. They were inspiring.

Haven’t you thought about the boy next door secretly having superpowers and about his arcane to save the world by night?

Haven’t you wished for your own inland, homegrown superhero?

Absolutely Yes.! Because we all have.!

More reasons why Basil Joseph’s ‘Minnal Murali’ roots in us. The laughing stock which slowly leads us to the warpath is something more than a superhuman ruckus on the interstellar lane. It destroys the usual supernatural drama threads and sparks a whole new life to its superhero stratagem. It keeps the realism and the fiction part in balance thus successfully building up a native superhero at a village level. And this is where exactly the first contemporary Malayalam superhero film sees its triumph.

The story is about a thunderbolt hitting two different people in a village called ‘Kurukkanmoola’. One living in hopes of his lost love and the other dreaming of being successful. The story gets corded with twists and turns from there when their lives are connected via a lightning bolt from the sky out of blue.

The film starts with a scene of a child watching a drama at his village festival. The tie-in of the scene actually comes to light in the climax leaving us hanging on the ‘How’s’.! Family, Friends or with your loved ones ‘Minnal Murali’ could be your call for a clean watch. The little child from the beginning as usual grows to be our hero, Jenson, who is a regular guy from a small town with a broken heart but with big dreams in fashion. It’s shown throughout the film how he has been trying to build up his life by going to America. On Christmas eve, unfortunately, he is hit by a lightning bolt from the sky which later turns out to be his fortune.

On the other end, his nemesis Shibu, a local tea shop servant and a half lunatic is also struck by lightning the same night as Jenson, following which both of them develop inhumane strength and supernatural powers. Another surprise is that we happen to be solicitous of the villains’ story a bit more than the heroes. That’s the crux of Minnal Murali with no further spoilers for those who haven’t watched it yet.!

It sounds ridiculous and funny but only until you see ‘Minnal Murali’. The cast and crew of the film have made an exceptional film out of an idea that sounds actually stupid.! Creativity is put to maximum use here. Basil Joseph has maintained a very good balance of reality and superpowers by taking us smoothly along the parallel tracks of two men. His direction is exceptional and unparalleled for it is a challenge to tackle complex and subtle topics like this. If it were me I would have rejected the script in one go for the weakness and rawness of the storyA good script is what makes a film most feasible. Arun Anirudhan and Justin Mathew together have been beyond successful in replicating their thoughts on paper.. More convincing, relaxing and in a way easily understandable. No complex links and plots. It’s a storyline anybody can get but still stands out somehow, which explains how the audience is always ready to adore simplicity. The protagonist and antagonist both hailing from the same social condition in their village ends up being superhumans!  Simple as that, but it’s the story craft, skills and execution we are talking about.!

Tovino Thomas the actor, our hero..who impressively played the role of Jenson brings an undeniable natural and real touch to the character. His acting makes Jenson more engrossing and lively.

Guru Somasundaram who played the ‘hard to hate villain’, the crazy Shibu has lent his soul to the role making him no less important but if anything only more remarkable for his level of contribution. Just gonna say that he is so damn outstanding and zip my mouth. Uncontested best performance.! Stay calm and watch the villain steal the show, guys.!

The process of entire filmmaking under the lead of cinematography by Sameer Thahir, one who has been a part of several movies from the production and art direction part, makes Minnal Murali a masterpiece of Basil, and pride of all the actors who came by in the casting team.

The south Indian breakthrough ‘Minnal Murali’ cracks all the supernatural formulas from Hollywood and sheds away the idea of a rough and tough hero with our heartbroken boy next door Jenson. More reasons why Minnal Murali with its small budget of 18 crore rises to global standard with a praiseworthy technical charm as well. The technical team along with stunt choreography has done a noteworthy job staying within their own limits. Especially in the scenes where they discover their powers. The sequences where our hero realises his transformed body strength leave us with fits of laughter as his niece Josemon educates his uncle about Superheroes and Superpowers. Josemon remains a significant part of the entire story being the best buddy of Minnal Murali.

Coming back to the technical team, if you are someone criticising the VFX, then we should look into the small budget of this comedy social drama. It was appealing and enough for the story they came up with. Could have been better but production cost must have been an impediment. The final outcome definitely beats the Indian big-budget superhero movies like A Flying Jatt, Ra.One etc. This one overcomes the drawbacks of the construction.

The art direction crew who brought back the old era in its completeness deserves applause. Just an old television in two-three shots, no remarks on the time of year.. but we knew the story is from a retro age somehow. No mobile phones are shown in the film making it clear there’s a lack of communication to a broader range or to the rest of the world.! Maybe that part makes us think that the story of Kurukanmoola’s Minnal Murali might have remained in the small town’s little saga.

The music team cannot be left out as the background scores and the songs blend in really well with each scene. Not even a little deviation here or there. Just perfect.! Finally, the progressively subtle, connective editing by Livingston Mathew leaves us with 158 minutes of screen time in this relatable and close to culture movie.

While we analyse as a whole, maybe we can see an unwanted romantic angle with Jenson and a local Karate teacher. But the good thing is that it was left undiscovered any further and the story of a sad woman Usha also pops up making us stumble around a bit. The usual hero saving up some people who are about to fall off a cliff is included in the movie which felt like ‘Oh.! This was so expected’ !!

Villain was so brilliant in the role and the part he had to play but could have been with a much stronger backstory. His story was emotional and Guru Somasundaram has done more than an impressive performance with it. But him burning the village down and being on darkside could have been for more of an intense reason. The concluding dialogues of the movie again wasn’t much stirring and the villain died too soon. Shibu, the Villain’s life circumstances made him step into the dark. He could have been good but the world was cruel to him. He is not a typical Indian film hate-worthy villain if we think from his perspective! But he dies anyway before we could process his death or cruelty. We ain’t got no time to hate him. Cries!! That’s all for little but negatives and criticism.

Other than that how each and every character is given their own importance and none was left behind with a wallflower outlook and how the cringe was nowhere near in the film’s final output are all appreciable and incredible.

Just like in a dialogue from the movie, Superheroes aren’t based in America anymore. Here we have our ‘Minnal Murali’ amidst too many chiefs from Hollywood, setting the native superhero equations in motion. So let’s go Desi now.!