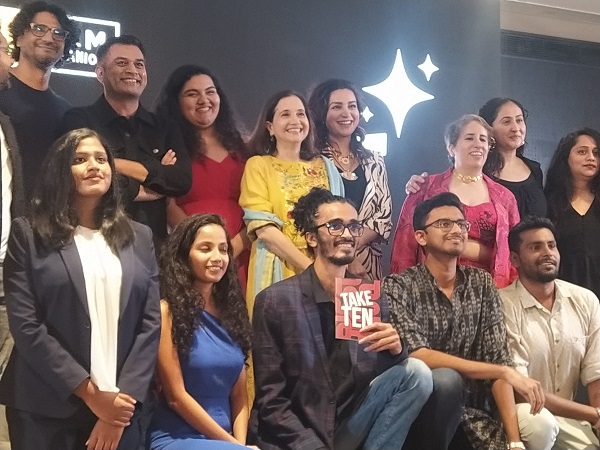 The essence of cinema is to bring forth real stories of the common man, the masses, be it the tell tales of village dwellers, to drawing the life sketches of human existence, cultures, and traditions. Take Ten the platform created by Netflix captures it all, the nostalgia, laughter, sorrow, and excitement, translating the thoughts of next-gen storytellers onto the screen…writes Dr. Priyaankaa Mathur

India abounds with incredible stories with its diversity, history, and culture, Take Ten is indeed an endeavour to find these stories and their storytellers. An initiative by Netflix Fund for Creative Equity, led by film critic author and Film companion Editor, Anupama Chopra, the Take Ten Masterclass and Workshop in Film Making Program was established to discover, new filmmakers, and give them a platform to bring their dreams come alive.

As part of the Take Ten a short film workshop and competition 10 filmmakers were discovered from diverse backgrounds in India. They were groomed by the best in the creative industry to include award-winning talents like Abhishek Chaubey, Hansal Mehta, Juhi Chaturvedi, Neeraj Ghaywan and Guneet Monga who took workshops on editing, direction and production. After the workshops, the selected storytellers were fully funded to make short films with a $10,000 grant. It’s been a journey of the past 10 months of innovations, learnings, tribulations, trial, and error, for the 10 finalists who were given a chance to bring their visions and thoughts together to create 10 short films, as part of the masterclass.

Some of the short stories are indeed heart-wrenching like BIJLI which is a story of a young mother who fanatically searches for her 3-year-old infant daughter, who’s lost on the streets of a metro city, where she works as an immigrant laborer, who ultimately embraces an orphan dog. HOME captures the plight of a tea plantation laborer, who wants to save her daughter from the exploitative labor system, while she struggles for money, after the demise of her husband who was killed by a wild elephant. CHOTI SI BAAT captures the sentiments of a little boy, who’s astounded by the life of the rich and hides his reality of living in a chawl from his best friend and schoolmates. Until, one lands in his home during Ganapati celebrations, loving what he hates, making him realize that it did not make the smallest difference to their friendship. The films will be showcased on Netflix’s India YouTube channel.