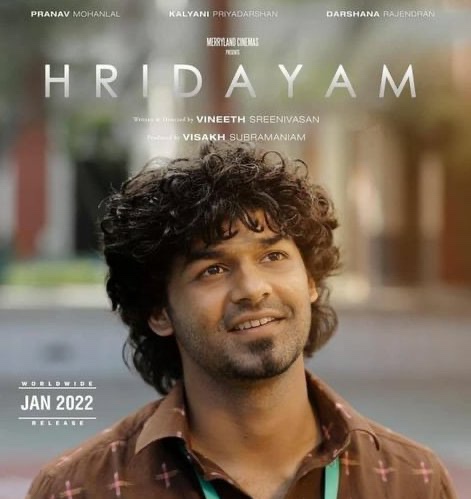 A good movie is pleasing just like good food.  We all felt that tickle-pink of having a tummy full of tasty food.. Right? That’s the same state, a flavourful movie brings to us. The smile an audience wears and takes home from the theatre is the success of a movie. And Hridayam, with its easy story plot, which holds minimal cinematic scope if thought about, in some way marks that grade of buoyancy. Just like the name, this is a movie for our hearts. A sight to our sour eyes.!

A story in mint condition! This is the movie where you might find your smile amidst its simplicity. If you are someone who has watched films like Thattathin marayathu, Malarvadi Arts Club, or Jacobinte swargarajyam, Then you know…when Vineeth Srinivasan announces a release under his passionate direction, there will be bated breaths all around and we sit tight till he breaks the news. There is something about his movies to have our fingers crossed for.

Director, Vineeth who is also a very popular Playback singer, an Actor known for his acting skills, a Screenwriter, Lyricist, Music composer, Producer, Creative director, and above all the beloved of the audience, knows exactly what to do with his script. And Vineeth has done a wonderful job in his latest release Hridayam zapping it right to our hearts.

What could be more restful than being relatable? That’s the reason why this movie sticks to our mind. We relate to the characters. Hridayam is a journey through the life of a man starting from his college days to when he becomes a father with a happy family to look after. It’s a twine of collage romance, intertwined pitfalls, the expedition through a beaten track, and is stowed with an aroma of feel-goodness. The film deftly grafted with lucidity at its core, take us along the most known, expected and relatable incidents in Arun Neelakandan’s (Pranav Mohanlal) life. Arun could have been you or me or someone we met at some point in our lives. We feel connected and absorbed.

The film has Pranav Mohanlal as the lead and this element caught attention for two reasons. One being the hype around the get-together of once well liked duo Mohanlal and Sreenivasan through their sons, Pranav Mohanlal and Vineeth Sreenivasan. Their father’s duo had brought great laughs back in the 80’s-90’s with their film and the people expected something unique out of the teamwork of their sons as well. Those expectations were addressed really well by Vineeth. Second being that Pranav was the lead. Unlike his father, the actor had his previous movies come out obscure. Hence,  he had that performance pressure with him but had it compensated for after the release of Hridayam. He bags all the hail from the critics and has the applause packed this time. The audience had doubtful notions on how maturely Pranav might handle the character but with the first song ‘Darshana’ that was released, the crew made things pellucid. Vineeth chose the right artist for his role, after watching the movie, even you’llsay unanimouslythat Pranav is the soul of Arun.

Pranav plays the role quite effortlessly with the swag of a young guy and handles the soft-spoken part of Arun struggling to find his peace. In the first half which is a bit too familiar, Arun can either be your cool guy of college or could be the hotheaded senior you will think twice before approaching. In the second half the narrative shows Arun as someone getting accustomed to the tactics of life. We can see our hero letting out his demons that haunts him, driving him mad and slowly he finds his way out by fixing the odds. He is lost and found and never forgets to go back to his roots as well. His life takes you down a memory lane of your own campus lives if you are a graduate already. If not, you will relate to him despite not being a college student. Especially if you are someone who graduated or is a student from Chennai, then this movie can be a treat to you. Taking you to your familiar territory.

Darshana, the talented and feisty but heartbroken girl.! Without adding any spoilers let’s say she is the one moulded through emotional breakdowns. She knows how to take revenge, knows how to retort back and get what she wants. Yousee her fight for her peace of mind even if it’s too late for that. At times you are fed up with heroines moving on too fast, making the sincerity they served in their past relationship questionable by the audience. Darshana breaks away that stereotype as she finds herself hard to move on. Darshana Rajendran has beautifully portrayed the turmoil and the paths of freedom in her character’s experience.

Kalyani Priyadarshan who played Nithya also upheld the go easy attitude and bubbly aura of her role wonderfully. Vijayaraghavan as Arun’s father has also in the movie, delivered some heart touching dialogues which definitely needs to be seen by a youngster.

The one who cannot be left behind is Selva. When Arun’s buddy Selva says : “Nan pacha tamilan daa” it felt so empowering and must have been a proud moment for all the Tamilians out there. It’s being proud of who we actually are. He embraced his culture. Selva was the symbol of hard work, love and friendship. He is not ashamed of where he comes from, where he lives, the friends he has or anything. He is loved amongst his peers for what he does to help them grow. He believed in education for upliftment. His story by the end will bring tears to our eyes as it was the least expected twist in the movie.

Arun, Darshana, Nithya, Selva and Maya, who comes to frame for a short time being the

‘Not so interesting love interest’ of Arun back in his college days, together guides the kind of love which will hit totally different to our hearts. Love doesn’t bank on the same solid plot for everyone. It’s pacing can be different.  How it graphs our life is also different. Vineeth has beautifully brought the cheerful attire as well as the diabolical side of love to the frame. He brings with Hridayam the irrepressible emotions even with it’s not so overwhelming storyline.

While Arun was an on the cards character, Maya, Selva and Darshana turned out to be surprising. It was a good balance not making the movie seem boring and kept us entertained throughout the length of 172 minutes. We had high hopes even before the release, as Vineeth put out the album of Hridayam with all 15 songs. The crew knew how to craft their promo and they have done a successful job. The songs were purely contextual, giving us an insight into the different moods of the movie. And each of them blended into the background at all the right places giving us an overall musical experience. Viswajith Odukkathil’s cinematography along with the musical sync brought in by Hesham Abdul Wahab makes Hridayam an evocative description of campus tributes and internal conflicts.

The packaging of the movie is apt but at some points we wished that the music was lowered and that if a certain character was given more scope. Like the characters of Arun’s and Nithya’s parents. Both of them being the sweetest of all, caring, and fun to have in frame but with their sequences cut short.

Again, Nithya was somehow not quite up to the scratch unlike Darshana. When we analyse the depth of her character, Nithya’s story proceeds a bit too easy and fast for our comfort and it could have been more incidental. Other than the few little drawbacks, Vineeth has done a great work worth appreciating with a plain sailing story and delivered such an output through ‘Hridayam’.

The feel good narrative design, perfect casting, and soothing music will make your heart rule over this movie.! Hence, Hridayam is in all its helter-skelter, worth a theatre watch.! So get your hearts beating to some life now.!