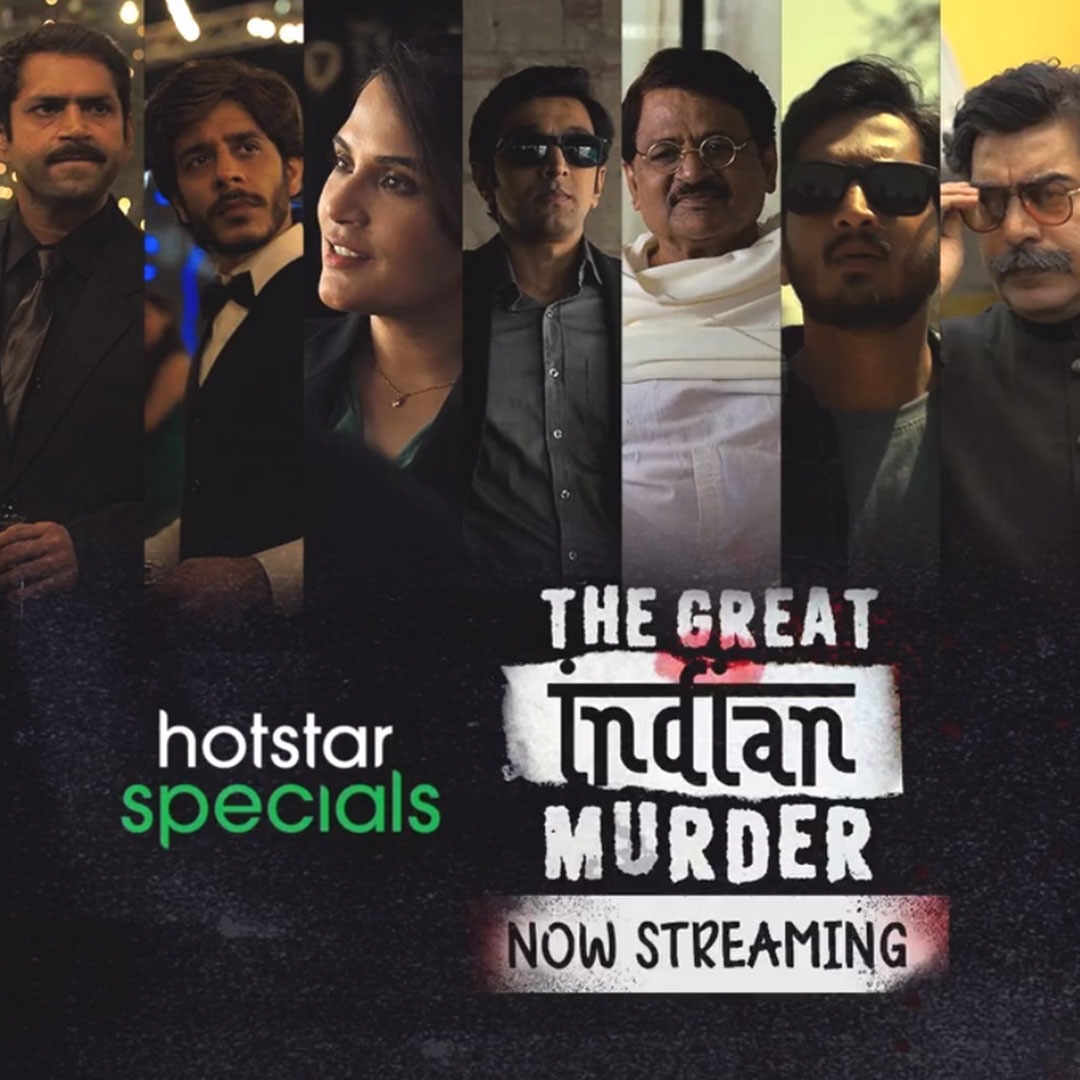 Let me begin with a disclaimer; if you are looking for a typical, over clichéd murder mystery novella kind of experience, with a linear storyline and dollops of revelatory twists, stay away from the 9-part political thriller The Great Indian Murder (streaming on Hotstar). Why? Well, right from the opening scenes till the very end of the first season, you will find yourself mired in a confusing mishmash of suspense-laced subplots, bunch of killings, a dozen of suspects (the series is an adaptation of 2016 novel ‘Six Suspects’ by Vikas Swarup) doing rounds in the series. The show also captures issues of naxalism, exploitation, kidnapping, and a reality-check of nexus between higher political echelons and top law enforcement officers. By the end of it all, it is a mindboggling cat and mouse chase which leaves you with more questions than answers while trying to tie up the loose ends. But as the show proceeds, you’ll observe that it is nearly an impossible task to achieve.

The Great Indian Murder begins with a racy first episode drenched in the usual nitty-gritty that makes for a typical Indian crime-thriller watch—loads of expletives, women objectification, violence and powerful display of political cabals. Vicky Rai (Jatin Goswami)—is the man around whose murder the rest of the story is closely knitted. Vicky is the son of Chhattisgarh’s Home Minister Jagganath Rai (Ashutosh Rana). He’s your typical son-of-the-powerful-politician guy who has been mollycoddled by an unprincipled father Jagganath.

Vicky Rai after being acquitted in a rape and murder case of two minor girls throws a lavish party. On the very day of the party, Vicky gets gunned down by god-knows- who! The rest of the series zeroes in on a perplexing journey of capturing the possible suspects and their background stories. But it’s not just the subplots that bother us in the long run; it is the number of dots that are left unconnected. Nevertheless, The Great Indian Murder keeps one hooked till the very end, and whether or not you enjoy this turbulent narration, it manages to keep the tempo pulsating. What follows after the murder on the night of the party is a pulpy adventure ride into many intriguing characters, which brings us to one certain winner of this series—the acting. Whether it is Ashutosh Rana’s character of a crotchety, power-mongering politician, Jatin’s baddie avatar as Vicky, Pratik Gandhi (of Scam 1992 fame) playing an underhand CBI officer, or Richa Chadha’s electrifying tough-cop innuendoes. There is some powerful display of acting skills by almost every character in the show.

Trying to get to the roots of the murder, Jagganath demands a CBI inquiry into his son’s murder, and thus begins the catch-me-if-you-can charade of a bunch of self-serving police officers and the CBI.

There are some really interesting characters such as the lost Andamanese tribal Eketi (Mani PR), the naïve waiter Munna (Shashank Arora), and an IAS Mohan Kumar (Raghubir Yadav)—all key suspects in the ‘great murder’. Mohan Kumar’s character played by veteran Raghubir Yadav is surely praise-worthy. He is diagnosed with Dissociative Personality Disorder and switches personalities from shrewd Mohan Kumar to peace-loving Mahatma Gandhi as Mohandas. In almost every scene that graced his presence, he surely managed to elicit a chuckle or two. Jatin Goswami seems like the perfect fit for the role of Vicky with his crooked lifestyle and debauchery. There is a scene when a young Vicky gets tattooed ‘I am saary’ on his back as a punishment by his father for bad behaviour. An unapologetic grown-up Vicky later repeats ‘I’m saary’ to his father after rejecting his plea for monetary help. This scene perfectly portrays the disturbing allegiance between the father and son. Richa’s character as the brazen-faced cop is magnificently executed. She has perfectly illustrated the everyday life of a tired out cop doing her job amongst a slew of corrupt politicians and officers. There’s also an undercover journalist who keeps a tab on the whereabouts of these politicians—posing as a messiah of truth and justice. As the lost idol of Ingetayi (portrayed as a kind of totem for the Andamanese tribesmen) that travels from one city to another from Jharkhand, West Bengal, Rajasthan, to Chhattisgarh and more, we are taken back and forth in the screenplay to interrelate the plots and subtexts every now and then. Again, the screenplay pulls off some brilliant strings and manages to keep the viewer engrossed. It’s the kind of storytelling that is not easy to follow, but even harder to ignore.

There is enough symbolism employed in the story. That is perhaps one of the most overlooked aspects in this entire show. While one might agree at the haphazard sequencing and baffling loose ends in its narration, let us not forget that there are undercurrents that need deeper analysis to decode the intention behind the story. With allegorical reference to larger issues of crimes and politics ravaging the country at the hands of a corrupt few, The Great Indian Murder subtly exposes the exploitation of vulnerable such as the greenhorn tribal and the poor waiter in the series. Used as pawns in the hands of unscrupulous politicians and criminals with money power, these innocent men fall prey to their shadowy activities. Mohan Kumar’s transition to Gandhi is yet another symbolism used—where one can see the relevance of Gandhi’s ethics and morals and his adherence to peace and ‘ahimsa’ in a world where torture and violence is rife. The fact that something as ordinary as a piece of statue—Ingetayi, can become a matter of life and death for a poor aboriginal while at the same time be a source of ‘misfortune’ for those who steal it, shows the power of superstition and faith in this country.

Yes, The Great Indian Murder is not free from flaws, and many at times downright bizarre. However, what’s interesting is the feeling that perhaps it was never meant to be an easy story in the first place. With complex yet interesting subplots and a string of good performances, The Great Indian Murder can be selectively admired for its good aspects and ignored for the obvious foibles. It’s a decent watch—and especially so if you are not obsessed with having the murderer revealed all at once. In order to truly enjoy this one, you will have to go beyond the regular expectations from a typical murder mystery.

Director Tigmanshu Dhulia who is known for his thriller works, has tried his best to recapture the narration of Vikas Swarup’s novel, and while he does falters on many aspects, he surprisingly infuses neo-noir-like elements in this series, and it doesn’t end up looking like a complete washout.

The Great Indian Murder takes help of all such things as—money power, corrupt politicians, booze and cigarettes, murders, kidnap, mental illness to weave into a crime story. It’s totally up to you if you want to enjoy this exotic preparation as a whole, or delve into the imperfections of each ingredient. Watch it for it will not fool you, but only play with your patience a little bit. Given the pace and performance and the subtexts, The Great Indian Murder, at least for me, never felt boring all throughout and kept it intriguing. So, no, ‘I am NOT saary’!

One thought on “Series Review : The Great Indian Murder”