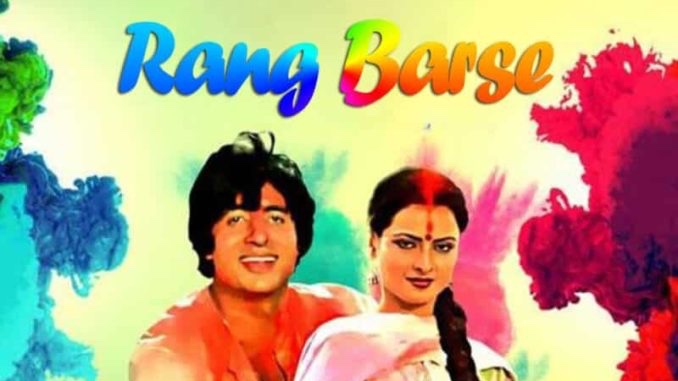 Rang Barse: It has now emerged as one of the most iconic songs from Bollywood films. People of all ages love this song especially during the Holi festival. This song reveals the budding romance and flirtation between Amitabh Bachchan and Rekha in Silsila. The song has given several memorable moments. Amitabh Bachchan was married to Rekha in the film while Rekha to Sanjeev Kumar. In the song, Amitabh Bachchan flirts with Rekha as Jaya Bachchan and Sanjeev Kumar watches them in silence. Watch the song below:

Yeh Jawani Hai Deewani: Balam Pichakari has garnered huge popularity and has become one of the most favourite songs of all generations. The song is filled with several stunning moments. Deepika appears totally in love with Ranbir Kapoor in the song.

The superb chemistry between Ranbir and Deepika is clearly visible. After the song gets over, Ranbir confessed to Deepika that he wants the moment to stay forever.

Ram Leela: Ranveer and Deepika are a hit pair, both on-screen and off-screen. The duo appears stunning together in almost all scenes in Ramleela, but the most epic holi scene is top-notch. The chemistry between the reel and real life couple is quite raw.

You will fall in love with the couple when Deepika applies red colour on the neck of Ranveer in the film and later they lock lips. Watch below:

Mohabbatein: This film has also given plenty of amazing scenes and moments. The tikka scene between Amitabh Bachchan and Shah Rukh Khan still remains etched in the memories. Big B portrays the role of disciplined principal while SRK is seen again in his romantic avatar.

The song Soni Soni is also one of the popular Holi songs. Watch below:

Padmaavat: You will like the moment when Deepika applies Gulal on Shahid Kapoor and a folk song is being played in the background. You cannot miss the stunning chemistry between Deepika and Shahid in Padmaavat in the scene. Watch below: