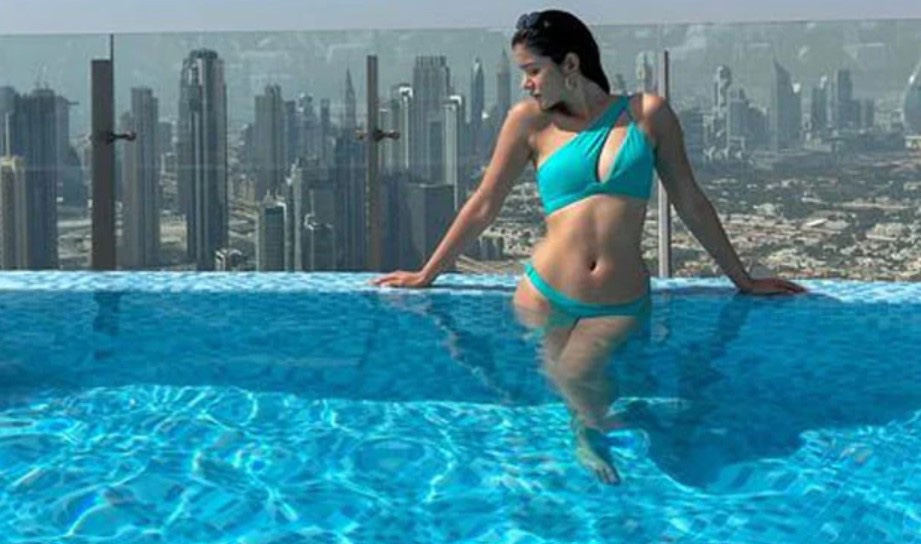 Shanaya Kapoor knows how to make it to the headlines. She recently shared a stunning picture of herself spending quality time in the pool. Shanya is seen enjoying at a rooftop swimming pool in chic blue swimwear. As soon as she posted the picture on her Instagram handle, her mother Maheep dropped blue heart emojis. She is also ready to debut in the Bollywood industry with Bedhadak. Recently, Shanaya purchased a luxurious Audi Q7. Shanaya is the daughter of actor Sanjay Kapoor and Maheep Kapoor. See the post below:

Esha Gupta always sets the bar high when it comes to her sartorial choice. Her outstanding fashion sense never fails to awestruck her fans. She is frequently spotted in stunning bikinis or swimsuits and knows very well how to nail every outfit like a diva. The actress has an envious bikini collection, and she loves flaunting bikini looks on social media. Recently, the sultry beauty shared a throwback picture in which she can be seen sporting a red crop top that she paired with white bikini bottoms. See the image below:

Popular Bollywood actress Shefali Shah has finally spilled the beans about her crush. Recently, while promoting Jalsa, the actress named actor Amir Khan as the one who had stolen her heart. Shefali clearly confessed that she had a massive crush on Amir Khan. Shefali also revealed that she had written a love letter and sent it to the actor along with her photograph. With the recent success of Jalsa and critique’s appreciations, Shefali is on cloud nine these days. She has over three decades of experience in the film industry.

Actress Shruti Haasan and Santanu Hazarika have been dating each other for two years. But, now Santanu Hazarika has made a big revelation about their relationship. He has said the two are already married but “creatively”. Recently, the doodle artist and rapper Santanu noted that the two continue to inspire each other creatively. Shruti often posts pictures of her with her rumoured boyfriend, Santanu, on her social media handle. They reportedly began dating in 2020 and also moved in together during this period.