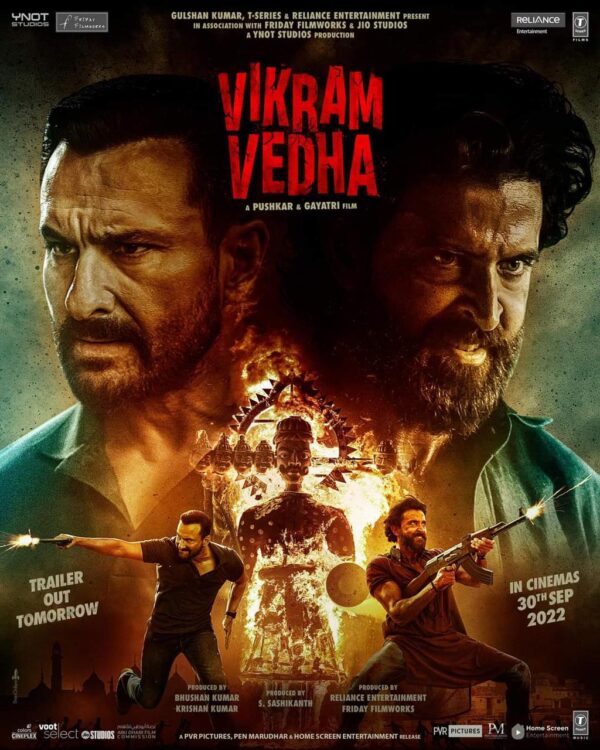 The film  Vikram Vedha begins with the legend of Vikram & Betaal,the legendary tale of the intelligent incorrupt king Vikramaditya who comes across a storytelling devil Betaal. The Betaal manages to fly off his grip every time, while he engages the king with his tricky questions on whom to grant justice at the end of the story.

The real-life characters of the legend were portrayed by Saif Ali Khan as ‘Vikram’ who is an honest police officer at Lucknow police station, who investigates Hritik Roshan the manipulative ‘Vedha’,a mysterious serial killer and a gangster, who compromises the law every day.

The plot exemplifies the win of good over evil, while the gangster tries to justify his wrongdoings while he narrates three well-contemplated life stories namely chor-chor, chor- chorni, and chor-police to Vikram. He tests Vikram on the compass of justice as a law enforcer, leaving him every time with a thought to contemplate between crime and punishment, which gave him clues to proceed in his investigation. Vedha not only manages to escape everytime, but also manipulates Vikram’s wife Priya ( Radhika Apte) a lawyer to advocate for him and stand against the law and her husband.

Hritik Roshan looks cool in the larger-than-life Indian villain avatar, justifying it with his calculated moves and expressions, which his mysterious character demanded. This time Roshan raises another bar from being a Greek God to a raw village uneducated gangster, who even goes tipsy with his gang, capable of enthralling the audience without a single female dancer in the item number. While, Saif Ali Khan is back in his Tashan, smart yet edgy as a super-intelligent cop, he handles this cat and mouse game with utmost sharpness.

The narration of the story brings out subtle nuances of old awadh with melodies, sounds, and dialogues creating the backdrop of Lucknow, while kurma nihari is used as a dish to be served as part of the plot. While, in a situation, the old Raj Kapoor classic ‘Awara hoon’ portrays the idea of the hooligans just aptly, where it’s required.

The story unfolds within its due course how an innocent boy Shatak is killed in a police encounter, while it is manipulated to look justified by the police as a damage for the greater good. The innocent kill eventually ends up haunting Vikram who pulled the trigger. The film questions how the restorers of peace and justice  can be sometimes too entangled to commit crimes, while they serve the police at one end and sabotage the system by getting lured by the underworld big money.

The film eventually turns out to be the revenge story of Vedha, although being a brutal gangster had a soft heart for his brother Shatak, a young promising boy, who had big dreams to help the poor to set up small-scale businesses.

The story leaves the audience pondering…who is the real culprit and to whom should justice be granted?… Is Vedha Betaal again set free or caught this time?… This is for them to find out while the film is indeed worth a watch!