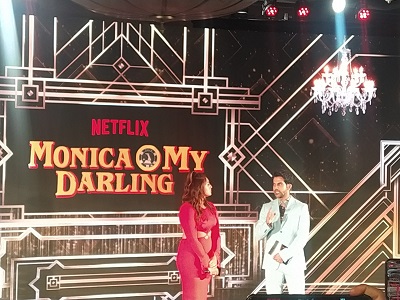 Huma Qureshi talks about playing Monika while she blackmails Rajkumar Rao in her upcoming movie ‘Monika O My Darling’, at the trailer launch amongst the entire cast and crew of the film…writes Dr.Priyaankaa Mathur

Actor Rajkumar Rao  unveiled each of the characters layer by layer, while the trailer was launched, stating, “What makes this comedy thriller amazing is its set of different characters and the storytelling, which is bound to take the audience to a thrilling experience.”

As the name suggests the film not only is named after the old classic ‘Monika O My Darling’, but it also has Huma Qureshi dancing to its beat. Talking about her act Huma said, “It would be a very big mistake if anyone even tries to imitate the legendary actress Helen from the original song, since no one can even touch that song, in terms of its delivery and  performance by her.”

Talking about the film the Director Wasan Bala said, ” The dark-humored crime mystery is an adaptation of a Japanese novel with a lot of twists and turns with all the required elements, which makes this comedy thriller, even more, exciting and fun to watch with its fantastic cast. It’s been an exciting experience in collaborating with Matchbox Shots and Netflix which never fails to bring forth ground breaking and worth binge-watching content.”

Having done many thrillers in the past Radhika Apte who plays an investigative officer in the film, said she loves thriller as a genre, but the character she plays in Monika O My Darling is something very different and she has never played something like this in her entire career. She looks forward to doing a variety of roles and more variations to explore the genre.

Monika Shergill, VP-Content, Netflix India, said, “The ensemble of the cast in the film complements well with Vasan Balla’s unique style of storytelling making this film unique in the world of mystery, humor along with its nostalgic music.”

It is for the audience to find out if the thriller actually brings a chill down their spine. Do watch the film all set to hit the digital platform Netflix on 11th November.