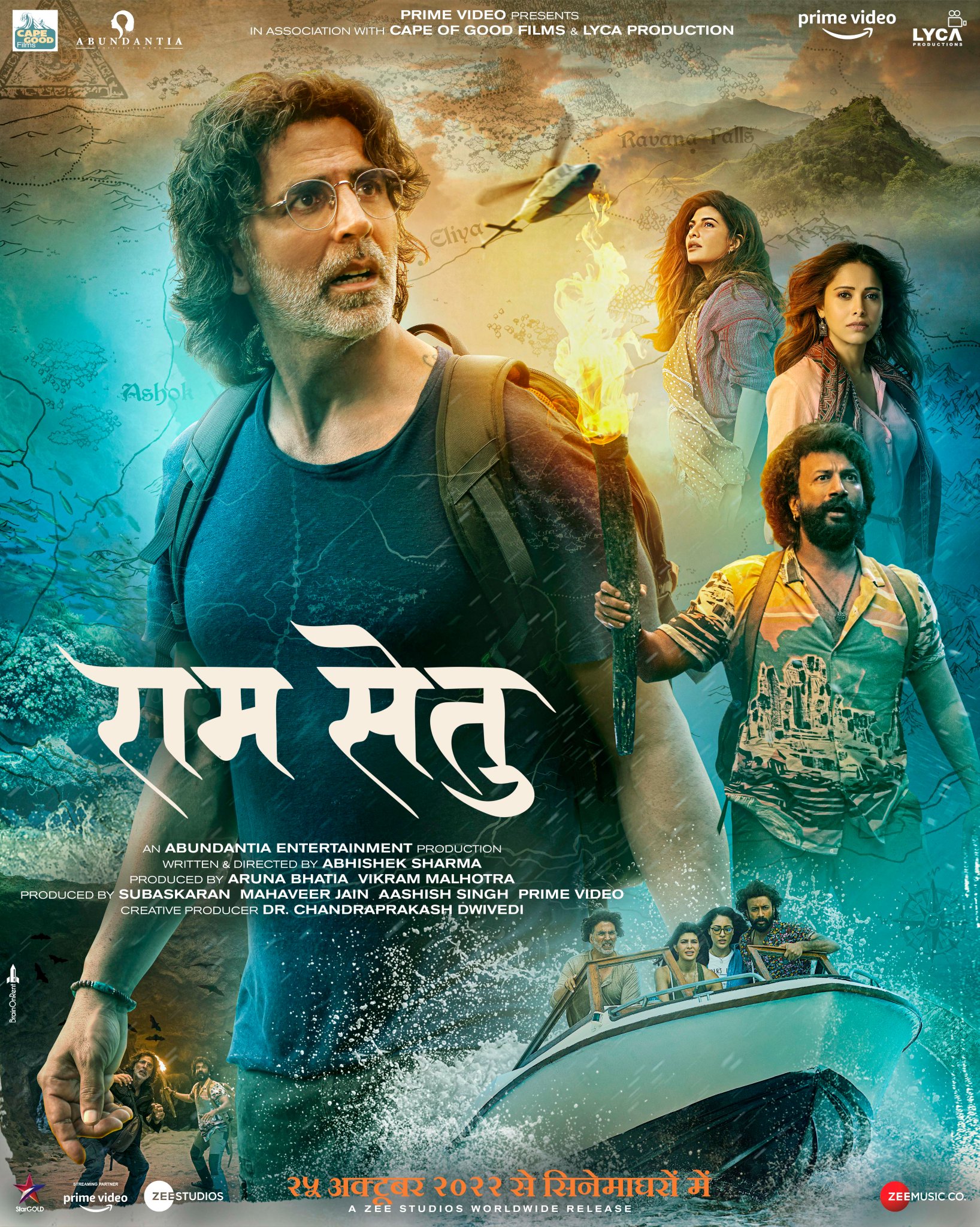 The film Ram Setu dwells into the legend of Ramayana featuring the architectural marvel, the sacred bridge of Hindu mythology, Ram Setu, also known as Adam’s bridge. The mysterious bridge is believed to be built by Lord Rama and his Vanar Sena from Rameshwaram to Sri Lanka, to cross the rough seas and rescue his abducted wife Sita from Ravana the King of Lanka in Tretayuga, around 7000 years ago from this day…writes Dr. Priyaankaa Mathur

The film begins with an Archeologist Aryan (Akshay Kumar) who’s after a successful excavation in Afghanistan, is called upon by the Archeological Survey of India (ASI) to set a dispute against the proposed demolition of the Ram Setu. Aryan being an atheist is considered best to create a report without any religious bias to prove that the Ram Setu is a natural structure and was not built by Shri Ram. The report is made in lieu to implement a development project supported by the government of India in collaboration with a shipping company giant.

Aryan’s report eventually backfires on him as it challenged Lord Ram’s existence, resulting in his suspension orders, while he and his family were subjected to religious hatred from the society. Taking advantage of his situation, Aryan is invited by the affluent shipping businessman who lures him to clean his image and bring out the scientific evidence to crush the religious angle to the bridge, which would help him to create an ocean corridor by demolishing Ram Setu.

As part of this research project, Aryan meets Dr. Sandra (Jacqueline Fernandez) who is an environmentalist. Eventually Aryan finds the legendary floating rock which as per carbon dating is proven to be 7000 years old suggesting Ram Setu to be a man-made structure, built by Rama and his kins and not a natural construction. The ship owner eventually conspires to drown them and present a false report to the supreme court.

While they were left to suffocate in the middle of the sea due to a submarine malfunction, they were saved by a Srilankan guide, Anjani/AP (Satyadev) who mystically appears in the middle of the sea in a motor boat and drives them to Srilanka. Aryan eventually decides to prove the Existence of Ravana to counter-prove the existence of Rama as not just a legend but a historical fact. He decides to collect  Archeological proofs of Ravana’s Golden Palace, Lanka, with the help of an old manuscript of ancient Srilanka sourced by Anjani.

The film brilliantly connects mythology to reality and is an experience to watch that bestows impeccable cinematography. It’s indeed a brilliant initiative by the producers to bring this theme and Ram Setu into the public eye, which is the most ancient architectural marvel of the world and indeed should be considered as a world heritage sight.The film takes you through an exciting journey covering exotic locations of the Ramayana trail in Srilanka, while you live through the legend visiting the Ashoka Vatika, Trikut Parwat, the Ravana caves where he inhibited and Ella Water walls where he played the veena.

Meanwhile, Dr. Sandra even recognises a local herb as Sanjeevani booti, while they collect  to prove Rama’s existence. Amid all this, the Supreme court gives just three days to demolish Ram Setu for not having enough evidence, which looks very hasty in the practical parlance looking at the sensitivity of the issue. Although Aryan gets to submit them just in time, while he defends Ram Setu as a man-made structure.

At first, you wonder why would the government want to demolish Ram Setu, which doesn’t set in the present political context. Anyways the film finally establishes faith in the existence of Rama as a superpower that safeguards the faith and the religious sentiment of the masses. The film eventually stresses the emotional connection of Ram Setu being the symbol of Maryada, Bhakti, Mukti, Shastra, Gyan, Maya, knowledge,  Karma, and the victory of Good over Evil, which eventually balances the act.

The script is quite well thought and we need such films which bring positive insights to inculcate Indian traditional beliefs, values, mythology, and culture into our modern domain and also to encourage our children from an early age. Parents can certainly imbibe the way how Professor Gayatri (Nushrat Bharucha) Aryan’s wife simply gets her son to learn about Indian mythology through Ramayana comics.

Akshay Kumar looks convincing as an atheist, who only believes in the evidence and actual proof being an archeologist and a scientist, till the time he experiences faith himself. In fact, in the climax, the suspense of Hanuman raises goosebumps which is for the audiences to experience, while the film succeeds in establishing faith even in an atheist!