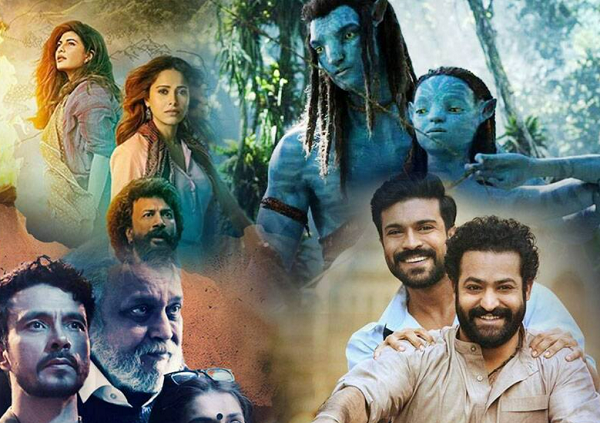 Few hours are left until the end of the eventful year 2022. Although the pandemic caused a fall in theatre attendance, we still could watch films online. Even while moviegoers are thrilled to return to the theatres, the thrill of returning to see a movie on the big screen this year was somewhat reduced due to the pandemic. Picking ten movies to adore is never a challenge, even within the frame of 2022, when everything was unusual due to the pandemic situation. Here are the top ten choices for 2022!

In Gangubai Kathiawadi, a far more modern period of Indian history is addressed. It takes place in post-independence India, just when the nation was beginning to stand on its own.

Gangubai, a brothel owner recognized for fighting for the right of prostitutes to have their children educated and gain more recognition in the society. The movie follows the journey of Gangubai, a young girl who was bought into prostitution and later raised to struggle for the equality of women. In the lead part, Alia Bhatt shines brilliantly.

The film is a difficult art form to master. But S.S. Rajamouli, an Indian director who is up for everything, illustrates how it’s done in “RRR,” which stands for “Rise, Roar, Revolt.” It’s an illogical epic that alternates between powerful song and dance sequences and terrible revolutionary fights. The greatest success in India is now a finalist for an Oscar.

It’s a genuine movie miracle that filmmaker Ryan Coogler and his cast were able to complete the Marvel superhero franchise during the midst of Chadwick Boseman’s death. The film itself would be spectacular in any situation.

The movie pays tribute to Boseman’s legacy and to that of his iconic character through T’Challa’s sister Shuri (Letitia Wright) as well as her peers Wakandans, who must save the day while going through their mourning process. It also dives deep into geopolitical tensions with the appearance of Tenoch Huerta Mejia’s antagonist Namor.

Cruise carried off an incredible magic trick by directing and writing a long-awaited return to his 1980s action classic, which was full of flying swagger and volleyball, and releasing a sequel that turned out to be excellent. The reason “Maverick” is successful is that it fully owns everything that “Top Gun” is and ever was a powerful adventure that flies into the Danger Zone and appeals to everyone’s rebellious side.

With varying degrees of success, Bollywood has traditionally produced Hindi renditions of popular Tamil films. The 2017 Tamil thriller drama Vikram Vedha featuring R Madhavan and Vijay Sethupathi. It is based on the children’s story Vikram-Betaal, in which a king is charged with carrying a horrible ghost on his shoulder and responding to questions asked by the creature throughout their trip together. Saif Ali Khan portrays Vikram with a confused expression, and Hrithik Roshan plays Vedha with a shaggy beard and crazy glitter in his eyes. However, both actors are somewhat too well-groomed to ever be convincing as street hustlers who climbed the ranks of crime.

Anvita Dutt, who wrote and directed the engaging Bengal Presidential race film Bulbul (2020), is back with a new extravagant movie set in India before freedom. Issues of feminine want and the masculine perspective were explored in the earlier film, but Qala rather uses music to depict a complex mother-daughter bond.

Talented singer Qala played by Tripti Dimri. She is bothered by her mother’s judgments; however, it seems that her mother had expected that Qala’s adopted brother Jagan would continue the musical tradition of the family.

The thrilling follow-up to 2009’s “Avatar” took James Cameron 13 years to complete; the journeys of Jake Sully and the vibrant blue Navi were never meant to violate established storytelling gatherings or be clever and witty, but rather to motivate and start moving us with simply stunning visuals and enduring tales.

The oceanic sequel thriller is the kind of film that serves as a reminder of why we adore watching movies. According to figures from measuring company Comscore, “Avatar: The Way of Water” topped the global box office for the Christmas holiday for the second week for a total global of $855.4 million.

After Scott Derrickson chose not to return for the sequel to “Doctor Strange,” only Sam Raimi agreed to take over as director.   It was absolute chaos watching “Doctor Strange in the Multiverse of Madness.” The idea was fascinating, and having Raimi in leadership guaranteed success.

The Scarlet Witch, played by Elizabeth Olsen, appeared outraged in the movie. She was shown in the film to be the major antagonist and someone capable of defeating the Master of Mystic Arts personally. Even negative criticism could not stop the movie from making $955.7 million.

Dr. Uday Gupta, played by Ayushman Khurana, wants to concentrate on orthopedics, but he ends up being the lone male in the gynecology faculty of a medical school in Bhopal, much to his extreme dissatisfaction. He decides to do it but quickly finds himself in a sequence of hilarious scenarios and occurrences.

The main plot of this comedy set on a medical campus is that the experience will make him a great doctor and a better person. In her debut film, Anubhuti Kashyap exhibits her talent by demonstrating her ability to take a storyline in a way that will give proper reasons to engross the audience.

A continuation to the 2015 hit “Drishyam,” “Drishyam 2” is an Indian film scheduled for release in 2022. Murder, suspense, and thrillers are the three primary genres of the movie. It was fair to expect good stuff from the sequel given the huge success of part one.

A series of unexpected occurrences that threaten Vijay’s family and peace are shown in the recently released movie over seven years. A murder investigation in which the Salgaonkar family was a key suspect is the subject of an investigation. The crowd adores the film and praises it for having an engaging plot.