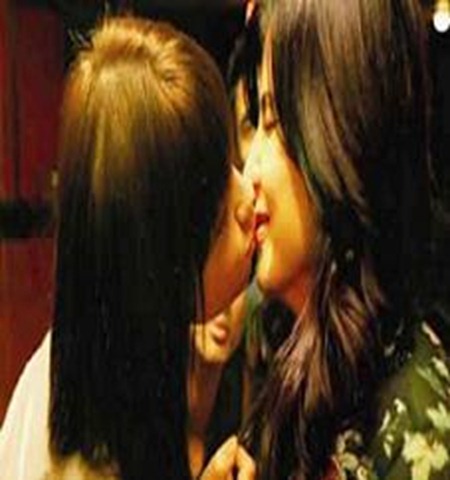 In an exclusive interview with Mauli Singh of ‘ Mid Day’ the actor of Khichdi The Movie, Keerti Kulhari shares the details of her lip lock with Kalki Kochelin her co-star in the movie’ Shaitan’.

She told Mauli that she got bold for her role in Bejoy Nambiar’s Shaitan.In the Anurag Kashyap production, she plays Tanya, a girl next-door who’s part of a wild group and is compelled to lose her inhibitions.

Tell us about Tanya…

She is the most sober in the gang of shaitans.
How does she end up kissing another girl, Amy (played by Kalki)?
Tanya doesn’t want to kiss Amy. They’re playing truth and dare. Amy is a cool girl who likes to try different things. It’s her turn and she ‘dares’ to kiss me.
How do you rate Kalki as a kisser?
It was hardly a kiss.
Is it the only time you have been kissed by a girl?
(Laughs) Yes. And it will be the last time ever.
Has any girl made a pass at you?
Yes. In Standard 10, there was a girl in my badminton team. I think she had the hots for me. Though she never said anything, the way she used to talk and give me attention, made her intentions very obvious. She would feel very jealous if I talked to guys…
Were you told that you would have to kiss a girl?
No. Bejoy told me about everything else but the kiss. Well, he did bring it up once, but I thought he was kidding. It wasn’t until we were rolling, that Bejoy announced that the scene was on. Kalki kisses me in that scene.
Did you enjoy it?
I was traumatised. Thankfully, it was just one take. The reaction in the film was what I was actually going through at that time. I haven’t even kissed a guy onscreen. And I did my first kiss with a girl! That was an experience.
Did your co-stars tease you?
Yes, they were all teasing us after the shot. After the shot, Kalki even fooled around. She started behaving like she had the hots for me. She tried to run her hands on my thighs. I told her to stop it and let me regain my senses. I was very amused.
How did your family react?
They were shocked. But they completely understand that it’s part of the profession. They have been supportive.
What is your take homosexuality?
To each its own. I like to kiss a guy and want to be kissed by a guy, but I have nothing against people who have homosexual tendencies. I have gay friends. Filmifiles.com is a website that offers news, views and even the inside stories from the glamour world be it Bollywood or Hollywood, for those who love the world of movies, stars and the art of cinema.

Look here to know more in detail about how Wonder Woman 1984 trailer is pure GOLD!