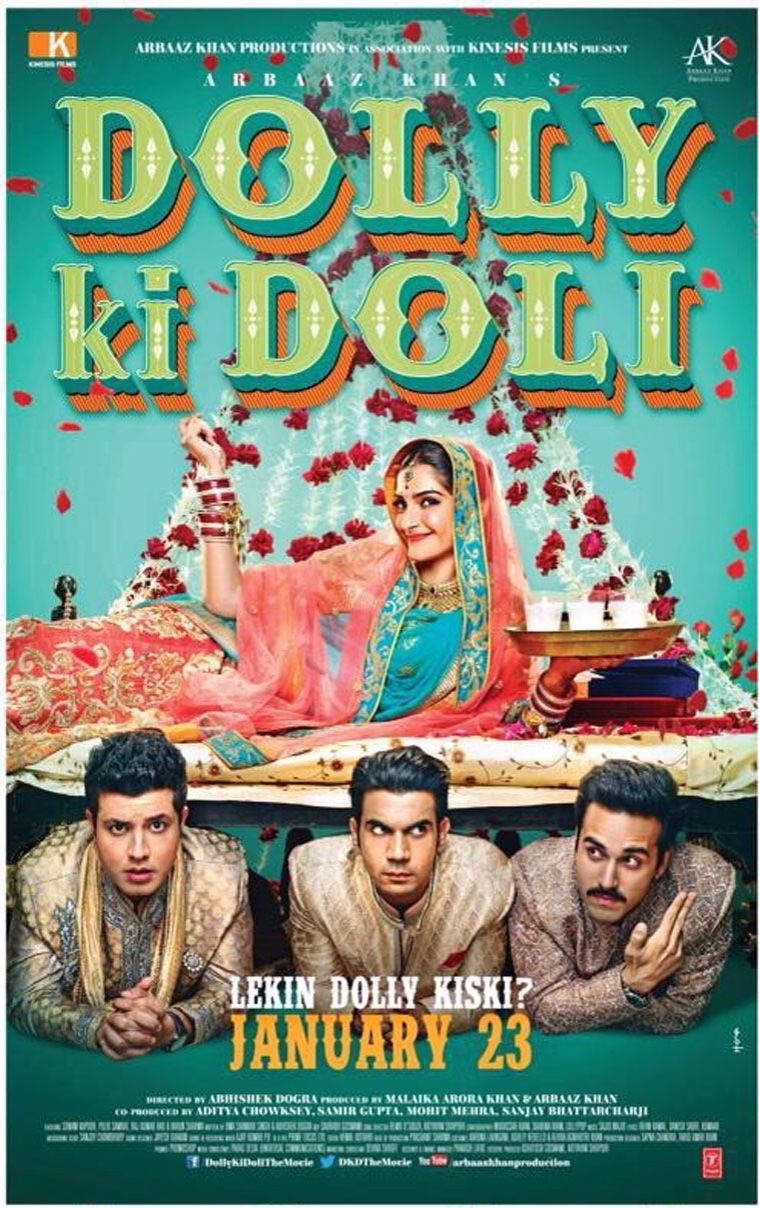 I love the glitter, noise, colour and excitement around a wedding (to be read as wedding, not marriage). The blushing bride, the dashing groom and the melee of dressed up people who just can’t seem to make up their mind over what to eat first. My personal favourite sights are drunken uncles parading their tushie on the dance floor, bejewelled aunties assessing one another with a wicked gleam in their eyes, little boys and girls running around with total abandon; while our bride and groom sit up on a decked up stage posing to the photographer’s whims and calls. And now that’s all I care about a wedding, what happens after (the monstrous marriage!) is clearly none of my business. Well, as it happens to be, that’s exactly how our dear director, Abhishek Dogra, happens to think. Dolly ki Doli has an interesting first half – fun(ny) and weddingy- and an utterly senseless second half(well, you see, the marriage never really happened).

Dolly (Sonam kapoor) is a con bride. She and her supposed family approach prospective grooms, fix the alliance, arrange a grand wedding and the same night ransack the entire house after Dolly drugs her ‘new family’. Robin Singh (Pulkit Samrat) is the cop investigating the case of ‘Looteri Dulhan’. Will Dolly ever get caught or will more hapless grooms fall prey to her vicious charms?

Dolly ki Doli is based on a true incident that took place in Kerala, so however improbable the storyline may have seemed, this has actually happened. Despite a fascinating theme, the story glides down to a crash in terms of direction and script. The second half is a crudely knotted up affair with a lousily scripted climax and a half baked story. My second half began with a ‘huh?!’, proceeded to a ‘what in the name of hell?’ and climaxed into a ‘oh!lord’. In terms of acting Rajkumar Rao and Varun Sharma deliver good performances as the duped grooms. Mohammad Zeeshan Ayyub is undoubtedly a brilliant actor but his character does not have enough meat to play with. Pulkit Samrat ends up as a un-Chulbul-ish copy of Salman Khan and Sonam Kapoor, yet again, brings forth absolutely nothing new to her character. The guest appearance by Saif Ali Khan was pretty much uncalled for and his being in the movie was as good as being amiss. The downright dumbest moment in the movie was that none of the grooms have a picture of Dolly and none of the guests clicked a picture of the bride during the wedding (come on now people, this is the age of smart phones and selfies!). The songs are fun and peppy and you are sure to hear them play at your neighbourhood weddings for a long time now.

The promise made in the first half is shred to bits in the second half, so only if you are a die-hard Sonam Kapoor fan, maybe, then you will enjoy Dolly ki Doli. For the rest more ‘sensible fans’, we can always wait another week!
My verdict: **