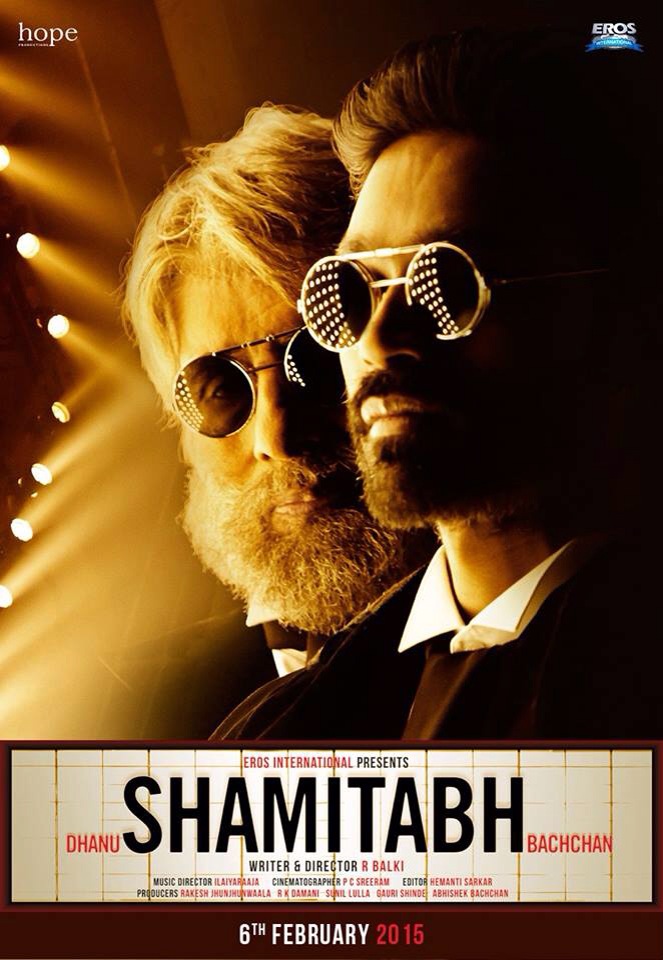 Movie: Shamitabh
Director: R. Balki
Cast: Amitabh Bachchan, Dhanush, Akshara Hassan
Genre: Drama
What happens when the big-wiggies of the film industry get together to create a product? R Balki is a magician. Cheeni Kum and Paa are two movies that stand out in the pages of cinematic history as masterpieces. Simple themes entwined with mesmerising performances, masterstroke compositions by Illyaraja and Balki’s final rabbit trick where he pulls out none other than Amitabh Bachchan from the hat. So you see, when the trailers announce R. Balki on the move with another magic show, you perk up your ears, widen your eyes and sniff the air in anticipation and excitement. But you forget that every magician has that one day where he messes up his routine, loses his rabbit and forgets his spells. Well, Shamitabh is just not your day, Balki!

Dhanish (Dhanush) is a speech impaired since birth, but that serves as no setback to his flighty dreams of stardom. From a small town, he lands up in the city of dreams, starry eyed and ambitious, but all alone. Akshara (Akshara Hassan) an assistant director spots him caught up a brawl and going against her own logical sensibilities makes him enact out a scene as an audition. But the pressing question remains, an actor needs a voice. After a series of avant garde scientific experiments, Dhanish can finally speak, only, not in his own voice. They find a drunk Amitabh (Amitabh Bachchan) with his mesmerising baritone to be an ideal voice for Dhanish. While latter finds his own voice, Amitabh loses his being. And what is left behind is an itchy question of what do you enjoy in a movie, the audio or the video? Dhanish or Amitabh? Or is it Shamitabh?!

I cringe from even commenting on the acting of ace actors like Amitabh Bachchan and Dhanush. Needless to say, when it comes to their characters, they are seasoned enough to know the right ingredients. But everything else about the movie was a warm dish served ice-cold. From the very first 5 minutes the movie proceeds as a drag. I was restless and fidgety on my seat as the camera panned from one scene to another in utmost slow motion (metaphorically, of course!). The storyline is interesting till it gets stuck at one point. And that my folks, is a very long point. Ego rivalry between the protagonists eats up your entire two hours. How it seemed from where I sat was that the scriptwriter had a wonderful beginning at hand and he was hopeful of developing an end sometime. He hoped and hoped and who knows, maybe he is still hopeful. The ending of Shamitabh will slide down the historic lane of ‘damn! So predictable’.

So here are my pointers about what I don’t like about the movie: a) I am sorry, but I did not enjoy listening to Mr. Bachchan’s voice from Dhanush’s voice (Note: That does not imply I did not enjoy listening to that heavenly baritone, per se). As Akshara keeps referring to Dhanush as a monkey in the movie, taking her analogy, it was truly like hearing a monkey growl. Amusing maybe, but definitely not fascinating!; b) the script gets stuck after a point and the director’s and scriptwriter’s visible confusion as to what happens next is palpable; c) Akshara Hassan is cute and adorable, and that’s it. In the entire movie, I saw her ‘act’ In just one scene, and well, she did that good; and d) Most of the punch lines missed the bull’s eye by atleast a metre. Only rarely were they a near miss and hit (but still amiss).

The only thing about the movie that barely managed to salvage my three hours was looking at Amitabh Bachchan’s baritone and the songs (Illyaraja, you are a god!). For me the movie was an utter disappointment and I hope you will make an informed decision before staking you money. Good luck folks!