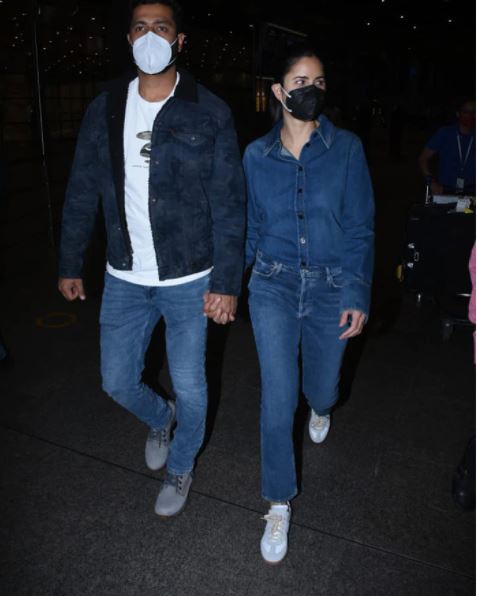 Vicky Kaushal and Katrina Kaif are busy setting major couple goals for their fans. The couple are all set to celebrate their first valentine together as they are seen arriving at the airport. Vicky and Katrina donned denim outfits and looked stunning. Vicky opted for a white tee and paired it with a black jacket and denim trousers while Katrina preferred shirt and trouser in denim. The couple is all decked up to celebrate their first valentine together post marriage.

MalaikaArora gets mushy in the arms of Arjun on Valentine Day, see pic

MalaikaArora is surprising everyone with her dreamy valentine preparations. The hot actress has begun her week in the most romantic way with her rumoured boyfriend ArjunKapoor. Malaika confessed her love for Arjun in a Valentine’s Day post and her caption will make you go aww. Meanwhile, Malaika and Arjun prefer to keep things private. In the post, Malaika is seen hugging Arjun while he kisses her forehead. See her post below:

KareenaKapoor’s Instagram post reveals that the actress is a foodie and loves to gorge on mouth-watering dishes. The Good Newws actress treated her fans with a picture of husband SaifAli Khan, children Taimur Ali Khan and Jeh Ali Khan. Taimurappears happy as he enjoys ice-cream and gives a thumbs up sign too. Saif is seen sporting a nerdy look in spectacles and pink t-shirt. She captioned the post as “Is it Valentine’s Day? Ok then lets ice cream…#forever two Saifu and Tim Tim”. See the post below:

Maaran: Dhanush and MalavikaMohanan make your Valentine Day special in the new poster

The makers of Mararan have decided to make your Valentine Day extra special with the new poster of the film. The makers have unveiled the poster today. The poster appears stunning in which you can see Dhanush and Malavika look sizzling hot. The fans of the two stars can’t wait to know what is in the store in the yet to be released film. Meanwhile, the action thriller will not have a theatrical release and is scheduled to be premiered directly on Disney+Hotstar. Music director GV Prakash has been selected for the film’s music making. The opening song of the film has been sung by Dhanush. See the post below: