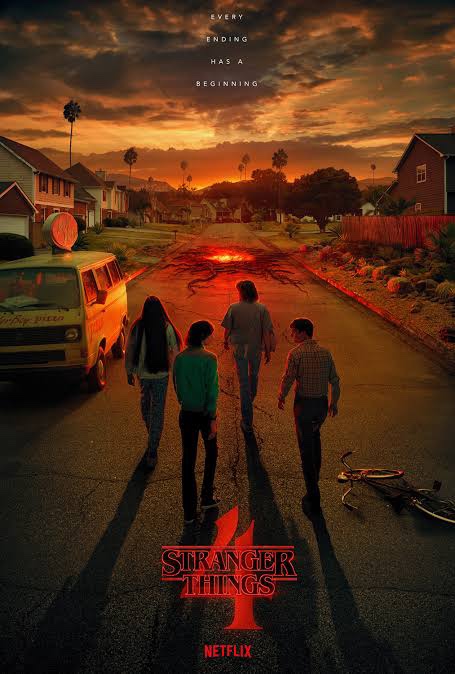 1. ‘Stranger things’ Season 4 will drop on Netflix on May 27

Ever since its first premiere on Netflix back in 2016 Stanger Things, a sci-fi fiction horror series, has consistently been one of the most popular series among sci-fi genre lovers. The creators, The Duffer Brothers, mix the 80s nostalgia with suspense to craft an addictive series. After the airing of the three successful seasons, all eyes are on the 4th season of Stanger Things and it is finally on its way – it is going to long-awaited suspense elements following season three’s explosive 77 minutes finale episode ‘the battle of starcourt’. Production of the 4th season was halted due to the pandemic back in March 2020.The season has been split in two – so we have to wait a little longer for the rest of the season. The first part arrives on May 27 and the second is coming on July 1. The number of episodes has not yet been revealed by the makers. Really!! Two release dates? the show runners ,The Duffer Brothers, said in a statement that it will be one of the biggest and most successful seasons.

Let us sneak peek into the trailer, the gang is on the horizon of a serious threat and Eleven is coping with the loss of her superpowers. We also get to look at Hopper still in captivity. All eyes are on the Fourth season to see how Eleven can stop an ominous war?

Have a look at the exciting trailer-

2. Panchayat season 2 is coming on Prime Video on May 20

‘Panchayat season 2’ trailer has been released. The two-and-a-half-minute trailer for the second season of panchayat looks reassuring and promising like season 1. Panchayat was first released in 2020 and emerged as a successful series due to its simple yet heart-warming storyline and the chemistry between the main characters and their refreshing performances stole the show. Panchayat season 2 is likely to live up to or hopefully exceed the pre-set benchmark set by season 1.It begins with Abhishek Tripathi, played by Jitendra Kumar, still trying to figure out the ways of Phulera, a remote village in Uttar Pradesh. We see him addressing the problems faced by the common public while simultaneously preparing for competitive examinations. As the Panchayat season 2 trailer progresses, we get a glimpse of his brewing friendship with Rinky, portrayed by Pooja Singh, the Pradhan’s daughter, something that was hinted at the end of Panchayat season 1. The trailer also revealed a new dimension of friendship between these two. Raghubir Yadav and Neena Gupta are still part of season 2 as supporting roles. You need to watch the previous season to fully enjoy this season as it is prominent from the trailer that it has a call back to the ‘piles’ gang that featured in the first season.

Escaype Live is an upcoming thriller series that is created, directed, and written by Siddharth Kumar Tewary, the director and creator of many shows like Mahabharat (Star Plus), Suryaputra Karn, Karmaphal Daata Shani (Colors TV), Porus (SET India), Ram Siyake, Love Kush and Radhakrishna.The cast involves some big names like-Siddharth, Javed Jaffrey, Shweta Tripathi Sharma, Swastika Mukherjee, and many more. The series comprises 9 episodes in total. The trailer throws a glimpse into the story of six adventurous individuals exploring the dark side of social media as they set on a virtual journey to bag fame and fortune on a social media app called Escaype Live. These six individuals, with different paths but one goal, cross every boundary and limit to produce viral content in a bid to win a hefty amount of Rs. 3 Crore, whichwas announced by actor Javed Jaffrey, who seems to be one of the founders of Escaype Live. The debutant OTT actor Siddharth seems to be playing an employee at Escaype Live.Overall, the trailer looks impressive as it promises unique and relevant content and storyline, and fans have expressed their approval.

4. ‘Modern Love Mumbai’ will be dropping on Prime Video on 13 May

“Modern Love Mumbai” offers a bouquet of “heart-warming, lyrical stories that explore love in its many manifestations”. All of the stories together show a unique love affair with Mumbai’s multi-cultural city. We are confident that these tales will bring joy, optimism, warmth, adoration, passion, tenderness, love, and sunlight into your life. The fans are ready to watch the series where love knows no gender, age, race, or boundary.

The link to the trailer is given below-

5. ‘Senior Year’ will be available for subscribers to stream on Netflix starting May 13, 2022

Senior Year is an upcoming American comedy film directed by Alex Hardcastle (in his feature film directorial debut) from an original screenplay by Andrew Knauer, Arthur Pielli, and Brandon Scott Jones. It is a story of a high-school cheerleader who slips into coma before her prom. The plot is based on a high-school cheerleader Stephanie Conway played by Rebel Wilson, who suffered a head injury and falls into coma before her senior prom. Twenty years later, she wakes up to discover that she is now a 37-year-old woman. Upset about not being able to finish high school, she decides to re-enroll with the reluctant support of her parents. She goes back to her high school and tries to assume her role as the star of her school. Most of all, she is still set on winning the crown as prom queen. So, the netizens are waiting to watch whether Stephanie wins everyone’s heart!!